The water ideals of Jo Smet

2015 is the year that the Millennium Development Goals make way for the Sustainable Development Goals (SDGs). An important role in both development agendas is reserved for water, sanitation and hygiene issues that leave much to be desired in many countries. OneWorld dived into the world of development and looks back and ahead with retired expert Jo Smet – who in 35 years of work has seen the necessary Western policymakers and developments in the field of water and sanitation pass by.

INTERVIEW - Everyone knows the images of poor children who yearn for a drop of water or women walking for hours with empty jerry cans on their heads for a few liters of water. How cliché these images may be, it is still the harsh reality and the numbers do not lie. In 2015 more than one billion people lack access to clean drinking water and over 2.5 billion people lack proper sanitation facilities.

Nevertheless, the sector has not been idle in recent decades. In several countries in Africa and Asia there have been developments in the field of sanitation and access to clean drinking water. But what actually works and what does not? And where are the biggest problems? We asked Jo Smet (see box) to provide some answers. With 35 years' experience in twenty different countries, he can be considered an expert in the field of water and sanitation in developing countries.

You have seen a lot in 35 years, what are the biggest differences when it comes to problems with water and sanitation?
"Actually the differences are not so large. There are almost always problems with hygiene, no water being available or lack of knowledge to build a sustainable water service. It does not matter whether you are in Ethiopia or India. The big similarity is that it often has to do with issues of culture – without trying to generalize of course. People are used a certain behavior and have been doing it for centuries. This makes it difficult to make changes that lead to improvement. You might actually have to change certain elements of a culture in order to achieve better sanitation and hygiene, but there is often resistance to change.

Is that not a bit like "we" who tell "them" how to do it?
"These changes must come from within, they should not be imposed. The fact is that a lot of new knowledge about good hygiene and water systems comes from the Western world, and it is important that this knowledge is transferred in a good way. It is counterproductive if we go to a community in for example Kenya and tell what to do and then leave again. You have to ensure that certain role models within a community set a good example so that the rest gradually takes over. This can be a leader or a group of women, which varies per community. There is no one universally effective approach.

"Changes must come from within, they should not be imposed. Role models in a community should set a good example"

Is that the biggest problem with many forms of development – too often thinking in terms of a blueprint?
"Yes, especially when I started this work in the early 1980s, I noticed that many Western organisations came with the idea: 'this needs to be done and we will do like this'. But once a water system was built in a village, it did not work and it was much too expensive to maintain. Sometimes you then have to take a step back. And it is quite difficult to explain to an African engineer who studied at the Technical University in Delft that a hand pump sometimes is better than a complicated water system. If plan B works better than the plan that you had in mind, then you have to switch. "

And it is of course important that something continues to work?
"Sustainability has also developed over the years in the development sector. When I started in Tanzania, the technical aspect of the work was seen as the most important. Nowadays, the sector thinks more holistically. There are sociologists who put things in the perspective of a given society and economists who look at how certain systems can be made affordable. That is something we do need. After all, the essence is that services are ultimately kept running by the community itself. Organisations and Western experts more and more have a supporting role on the sidelines, and that is a good development. An organisation like IRC helps especially with "learning" how to do things better." 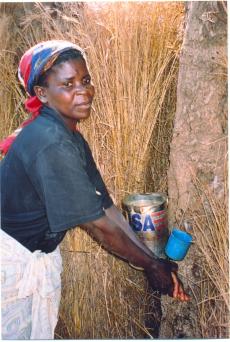 How have communities themselves look at Western interventions over the years?
"That is very different. In the early 1980s some African countries had just become independent and wanted to manage their own affairs. Western people were not warmly welcomed at that time. And I understand that perfectly well. And in other areas, people thought: "Okay you know better, you do it", but that does not work, of course. But most time is spent in a community convincing people of the importance of issues such as hygiene and sanitation. And that it should be sustainable. In India, for example, everyone nodded 'yes' if you explained what the significance was of clean toilets and how to use them. If you then returned five years later, only 8 percent sticked to the guidelines. Therefore, it is also good if local authorities monitor and explain things.

Making a legal obligation does not work either. In colonial times, the English found it important that people in their colonial territories had a clean toilet. It was included in legislation as a byelaw. When the British were gone, local communities immediately reverted to their own old system. In short, it makes no sense to impose things on people, they should understand why. In a study that I once conducted in Tanzania hygiene ranked fifteenth in the list of reasons why people should have a toilet. This speaks for itself. "

Today the statistics on people who do not have access to clean drinking water and proper sanitation are still alarming. Was there actual progress made in the time that you were working?
"Yes and no. Worldwide, more people now have access to good facilities. But at the same time in certain areas we see little development over the last ten to twenty years. And this is mainly due to a one-sided approach and bad governance. The latter in particular causes stagnation, especially in African countries. And it's not just about corruption, but also about short-term thinking. There's a tendency to push for quick results, but it does not work like that. If a change in culture is needed, for instance in hygiene behaviour, it takes a lot of time. And the fact that every area is different also means that careful attention needs to be paid to what works in a certain area and what can be made sustainable.

"Without political stability nothing can be achieved"

A country like Sierra Leone was once on the right path, but when it became politically instable, they had to start from scratch. Rwanda is an example where it's going well. After the genocide in 1994, the country got a grip on itself and there you will see that good governance at national and local level benefits issues like water and sanitation as well. Without political stability nothing can be achieved."

What do you consider your biggest achievement?
"Especially thinking about sustainability, so do not to look at what is working now, but what will still work in thirty, forty years. And in doing so, your focus should go beyond the technical aspects of services. The advantage I had was that I never had vested interests, as companies and some development organisations often have. So I've always been able to look at a wide range of things and I've been in the field for long periods. As soon as I saw that somewhere people suffered from tunnel vision, I stood up and explained the importance of local conditions and that you should learn from experience and local research to find the best local solution."

How do you back at the sector after 35 years?
"With a very positive feeling. Actually, I would love to continue this work for another 35 years. It is not always easy. To deal with unmet expectations you need an enormous amount of adaptability. The latter I had, luckily, maybe because I grew up in a village myself and could therefore empathise with small closed communities.

It is now important that developments continue and that local communities around the world become more self-sufficient and see the importance of clean water and good hygiene. This is achievable eventually by introducing tax systems to make sure the money also comes from the community itself, but this is obviously not so easy.

But I remain an optimist and see positive developments, in Africa as well. I have faith in the new generation. And sometimes it's good if we slow down, don't want to change things too quickly and just take a step back. If we keep raising awareness about water and sanitation, we will eventually get there. That was also the great achievement of the attention and funding generated by the UN development goals. Much has been achieved, but there still is enough to be done."