IRC Burkina Faso had an ambitious target: to reach 3.6 million people with an important public health announcement for good hygiene behaviours. A message of critical importance in times of Covid-19 and beyond. 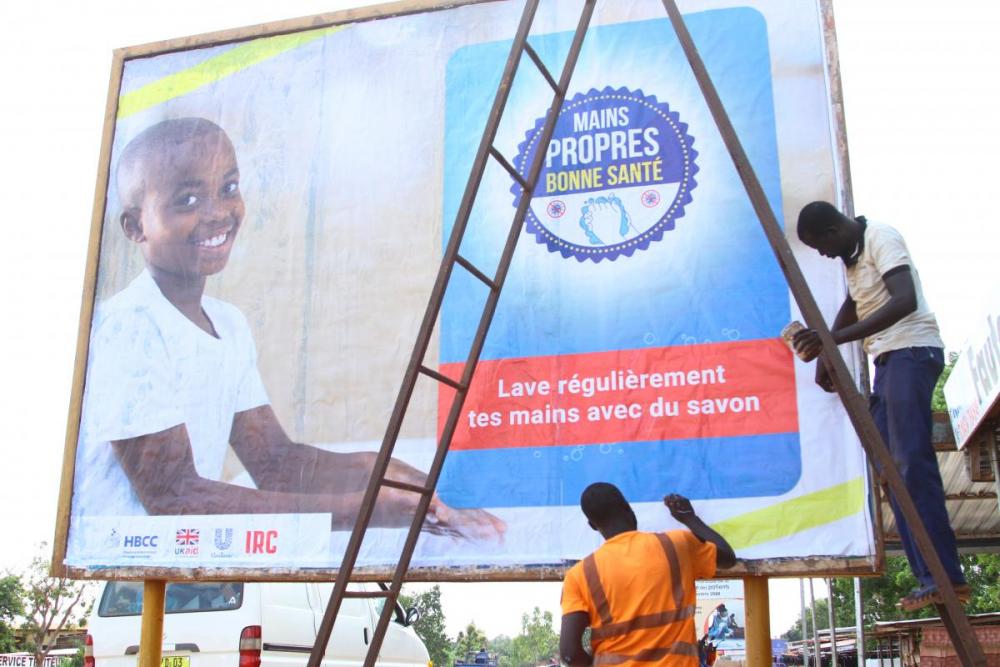 Handwashing with soap is one of the simplest and most significant public health interventions. As such, the Main Propres, Bonnes Santé campaign led by IRC Burkina Faso promoted better hygiene behaviours as a means of building stronger and more resilient communities.

The campaign sparked excitement around clean hands across all platforms. The idea being to reach as many people as possible through a series of unique engagements.

Since its launch in August 2020, radio, TV, social media and events have increasingly been singing to the tune of good hygiene. What’s more, thousands of billboards and flyers and town criers helped spread the word on the streets. Even religious leaders rallied around the message and called on fellow worshipers to follow suit. No stone was left unturned.

Mains Propres Bonne Santé targeted the residents of the capital city of Ouagadougou and the municipality of Banfora. A municipality with whom IRC has been partnering since 2017. Our campaign promotion team was composed of 22 members.

Six months since its launch, the campaign has had massive success. With the following achievements:

The campaign also acknowledged that children are important agents of change. The messaging was therefore also present in 180 classes at 24 primary schools, reaching 8,300 pupils. With the hope that the message on the importance of handwashing will be taken to other kids, to their families at home. Through a series of engaging songs, dances and activities, kids were taught the crucial link between well-washed hands and good health. Furthermore, 180 teachers supported the campaign as handwashing champions, ensuring the messages were reinforced throughout and beyond the life of the campaign.

Our messaging also went virtual, with the campaign Facebook page attracting over 12.500 followers.

A major success was the backing of politicians and prominent figures. The campaign closing show was backed with the support of the first lady of Burkina Faso, Mrs Sika Bella Kaboré and the presence of the Minister of Health and a representative from the Ministry of Culture, Arts and Tourism.

The campaign owes a great deal of its accomplishments to its four dedicated ambassadors. ‘If it wasn’t for their relentless energy, and passion to spread the message, the campaign would not have been such a great success’, says Juste Nansi, Director of IRC Burkina Faso.

A very special word of thanks goes to the HBCC programme and team, that made the campaign possible. With their financial support and guidance, we managed to reach 2.8 million people.

Our work is not yet done

A 2.8 million reach, although significant and a welcome success, is short of the envisaged campaign goal of 3.6 million. We can certainly build momentum – and with it, urge funders and partners, inside and outside Burkina Faso, to join efforts to ensure we go beyond Ouagadougou and reach all of Burkina Faso. Because everyone has the right to dance and sing the wonders of clean hands. Because c’est bon pour nous.

Hygiene & Behaviour Change Coalition (HBCC) programme was set up by Unilever and the UK's Department for International Development (DFID) as part of the rapid response to contain and limit the spread of COVID-19. The programme represents a £100 million contribution to the UK's response to tackling COVIDd-19 in low and middle income countries. The HBCC takes a three-pronged approach, building on Unilever's tried and tested hygiene interventions: mass communications, behaviour change programmes and digital solutions, focused on hand hygiene and environmental hygiene. IRC Burkina has been tasked with leading the delivery of the HBCC programme in Burkina Faso.