Dutch Leadership in Football and WASH 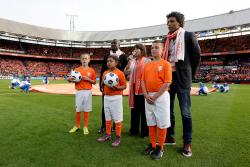 On Saturday May 31 the Dutch football team won with 1-0 of the Ghana Black Stars during a friendly match in Rotterdam. It was an exciting game, but something even more important happened that evening. Supporters brought money in for clean drinking water, and former President of Ghana and SWA chair John A. Kufuor who attended the match witnessed the Dutch minister of Development Cooperation and Trade Lilianne Ploumen allocate financial support for the SWA secretariat.

While the Football for Water public fundraising campaign kicked off during the Netherlands-Ghana match that aimed to highlight the importance of WASH, the Dutch Government signed an agreement with UNICEF to contribute US$ 1.5 million to the Sanitation and Water for All (SWA) partnership. Water and sanitation remain a priority for the Dutch Government, and for the coming years 100 million dollars a year have been budgeted to improve access to drinking water, sanitation and hygiene promotion.

At a special side event of the football match, all high level attentees were welcomed. This took place in the Feyenoord Museum hall where former President Kufuor, Ghanaian Foreign Minister Hanna Tetteh, NGO staff members and officials gathered. Kufuor complimented the Netherlands for its leadership in the field of WASH, and stated that: “Ghana and Africa have benefitted greatly from Dutch leadership on not only water but also on the essential but often forgotten issues of sanitation and hygiene. We have benefited from your engineering and scientific knowledge, and also through the generosity of the Dutch people and of your government.”

He also mentioned the active engagement of two Dutch organizations IRC and Simavi in the SWA partnership in “driving the partnership forward with their energy; their knowledge exchange and their commitment to bring the situation of the poorest people to the attention of policy makers.”

Dutch Minister Ploumen of Development Cooperation and Trade emphasized Dutch expertise in both Football and Water, saying that Dutch soccer coaches and water experts go all over the world to share their knowledge. This was proved right with the glorious win that evening: the Dutch win the game with 1-0.

During the break of the match Joke Brandt, Deputy Director of UNICEF and Minister Ploumen signed the contract. The SWA Secretariat will be working under the wings of UNICEF.

WASH is one of the spearheads of the Dutch policy. The commitments to the worldwide WASH sector were made last month during the High Level Meeting of the SWA in Washington DC, where the Dutch promised to improve water, sanitation and hygiene services worldwide through an investment of 100 million dollars per year over the coming 4 years (2014-2017).

The objective is to reach 25 million people with first-time access to sanitation by 2015 and first time access to safe drinking water by 2018. The 2014-2017 commitment was the continuation of a vision that begun in the first SWA High Level Meeting in 2012, where the Dutch government committed to USD 90.5 million for the 2012-2014 period, towards reaching 10 million people in West- and Central-Africa.