Starting rural sanitation in Benin with CLTS: how it became a game-changer 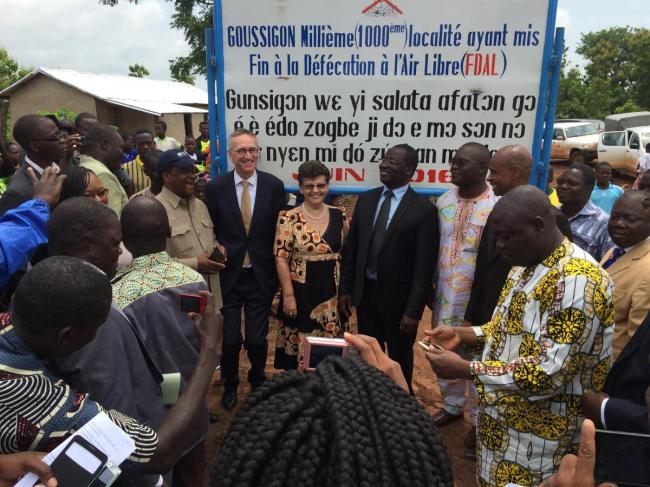 In 2013, the sanitation situation in Benin was dire, especially for rural sanitation: it was fourth in the global list of countries ranked by percentage of population defecating in the open. Hygiene awareness with the rural population was low, very low. This lack of hygiene knowledge also affected the results from drinking water programmes: an extensive study ordered by the Dutch and German Governments found that even if people had a clean source for drinking water, the water would be re-infected during transport and storage, so they were still drinking water contaminated with faecal bacteria.

An intervention to change this lack of hygiene awareness is Community-Led Total Sanitation, or CLTS. This hygiene education approach focuses on an entire community, such as a village. The various mechanisms of becoming ill are explained to women, men and children. There is a mix of interventions, involving all people in the village, to explain the way infections are transmitted, but also to make the ‘business case’ by showing how expensive these infections turn out to be for the families. People are inspired to create simple sanitary facilities, toilets and handwashing systems. The CLTS intervention comes down to social learning: you increase everybody’s awareness on hygiene. And it should be the whole village that takes part: only then will the effect be substantial, since infection through flies will be blocked.

To make this kind of change happen, you need skilled facilitators: people who know the logic of hygiene inside out, but who also know the local cultures, and what messages work. These kinds of facilitators require skills and extensive experience. Benin did not yet have such facilitators.

In 2013, the Netherlands funded a large WASH programme in Benin. There was a big bilateral programme, and there were other major Dutch-funded activities led by UNICEF and the Global Sanitation Fund, GSF (implemented by the Water Supply and Sanitation Collaborative Council (WSSCC)) (Gooijer, 2014).

So here was the problem: the rural sanitation challenge was huge, behavioural change was essential, funding was available, but no capacity to attain the expected results. In fact, some sanitation specialists in the country claimed that CLTS was not possible in Benin due to cultural reasons. Their conclusion came from analysing failed attempts by non-skilled facilitators.

The various programmes in Benin were not or hardly addressing the problem of capacity. Having secured the funding, the focus was entirely on implementation. But implementation by whom? The programmes had not reserved time to create the necessary capacity. This seemed to be also a consequence of the internal procedures of the implementing organisations, pushing for immediate results. Having an overview of this situation and realising the risk of collective failure due to a lack of skilled facilitators, a meeting was called by the Dutch Embassy in Benin. The meeting pushed for more and effective cooperation in order to develop the necessary capacity. After all, the group contained all the necessary dots, they just needed to be connected: governmental organisations to create legitimacy; UNICEF with strong global experience in CLTS, but not in Benin; GSF with their knowledge of scaling-up CLTS; and a number of NGOs having experience with CLTS, but again, not in Benin.

In the period that followed many collaborative actions took place: a small team from Benin visited Madagascar, to learn from their "Going to Scale” with CLTS. A continental conference on CLTS that was to take place elsewhere was held in Benin. Kamal Kar, the creator of the CLTS intervention, came to Benin with experienced francophone facilitators to prove that there were no cultural barriers to CLTS, and a system for developing capacity was created, involving local NGOs and output-based contracting.

Convincing central government that the implementation was to be done through NGOs was not easy: it was argued that this would be a governmental task, needing government agents to do the work. Having it done by such government agents would strengthen the governmental organisation. In the end the argument that CLTS is a one-time intervention to break through a barrier and that it requires specialist skills to achieve this, convinced the different actors to involve NGOs in the implementation. By linking the remuneration for these specialised teams to their results, the likelihood of having a successful change was expected to be bigger.

One million freed from open defecation

So did it work? Based on the sustainability reporting and the reporting of other programmes one million people were living in Open Defecation Free (ODF) conditions by the end of 2017 (UNICEF, 2018). One million and counting, as the capacity is up to speed now.

Of course, CLTS is not the complete solution for reaching perfect rural sanitation. The toilets that people make themselves are often not up to standard and may not function properly. However, CLTS has proven to be the door-opener/game-changer that was needed to jump-start rural hygiene and sanitation development in Benin.

The most challenging issue after the initial intervention is: how to build from there? How to use local health workers, schools and other forms of extension services to maintain and extend the behavioural change? Slippage, where the community resorts back to open defecation, is a risk that has been observed. However, the latest sustainability report on the UNICEF intervention found that 92% of the targeted communities remained ODF, a very positive number.

But in order to find a solution for the next challenge, you need to have a successful intervention for the initial one. In Benin, CLTS has proven to be the game changer it has also been in other countries.

UNICEF, 2018. Data received from UNICEF March 2018, based on the sustainability reporting by UNICEF and WSSCC, and reporting by other programmes. Numbers confirmed by the Netherlands embassy in Cotonou.