Highlights from our focus countries in 2019: Burkina Faso

Halfway 2020 Banfora did a self-assessment

Local authorities are committed to developing strategic WASH plans for the 2030 horizon.

On April 19, 20 and 21, 2017, start-up workshops were organised in the three municipalities. Through a participatory approach, IRC introduced a new tool for the planning and development of WASH (water, sanitation and hygiene) services so that by 2030, water and sanitation are no longer a luxury for the population. To this end, they have set themselves the primary objective of taking stock of the existing water and sanitation situation, and after that develop a communal strategic plan.

Despite efforts in the past decades, most rural communities in Burkina Faso still struggle to meet the needs for drinking water and sanitation. This is particularly the case in the rural commune of Bérégadougou and in the urban communes of Niangoloko and Banfora.

"It is unbelievable that you have your feet in the water, but that you do not have drinking water," said Denis Zoungrana

, senior expert and associate of IRC, at the beginning of the workshop.

It was a question of bringing together religious leaders, leaders of the decentralised powers, mayors, associations of water users, the administration in charge of water and sanitation, village councillors for development, as well as the decentralised technical services of the state, to discuss the issue of access. Participants from the three municipalities in the workshop, regardless of their social status and age, showed great interest in the issue at hand.

"We really suffer. Our women especially. To get water, they have to wake up at 4am. There are times when we do not even have enough to cook ... ", revealed

Brahima Soma, chief of the township of Bonouna, a village in the commune of Banfora.

IRC has always stressed that it is not just about the construction of water and sanitation systems, but also about reliable services. In the past, boreholes were dug without asking whether this solved the water problems of the population or not.

"It is the same as having the antenna of a telephone company in your village, you have a cell phone and a chip, but you cannot communicate because the network is of poor quality," said an IRC staff member.

It is essential to create the conditions for the population to have reliable access to safe drinking water and sanitation services, without throwing away old projects and their achievements. Therefore IRC wants, together with the municipalities, to ensure that the installed structures really deliver water to the population, that the water is of good quality and that there is a continuous service. To achieve this, the municipal authorities as well as all the actors involved in the sector need to be accountable for delivering this service.

Boubacar Héma agrees, "the participatory approach proposed by IRC is relevant and the indicators are measurable".

Bassie Héma, mayor of Niangoloko, states: "instead of the plans being imposed on us, the partners indicated that it is we who will have to be the owners of this project, they are only the facilitators". 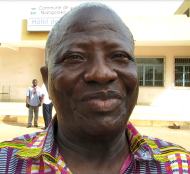 The village chief of Bérégadougou said the same: “if the villagers are not held responsible for the continuity of services, they will always wait for the donors to do the repairs when there is a breakdown”. "As the IRC experts explained to us this morning; we are responsible and they are here to help us develop what we want and need. This is a very good thing, because even if we do not have an actual plan yet, we know what we want and do not want".

This means that the whole project focuses on the fact that the people themselves should commit to changing the situation. Currently, in the municipality of Bérégadougou 71.9% of the population has access to drinking water, in Niangoloko 53.8% and in the urban commune of Banfora 91%. With the help of the communal strategic plans and the investment plans, the figures for the respective communes will improve. For this to happen, a strong commitment from all stakeholders is needed and all parties must adhere to the timetable for the development of the strategic WASH plans.

Highlights from our focus countries in 2019: Burkina Faso

Halfway 2020 Banfora did a self-assessment