The municipality of Banfora has held its second annual review of drinking water, hygiene and sanitation projects and programmes.

On 6 and 7 February 2020 the municipality of Banfora held its second annual review in its new conference room. This exercise served to take stock of the implementation of the Municipal Strategic Plan for Public Drinking Water and Sanitation Services by 2030 through the Annual Budgeted Work Plan (in French PTAB), the operationalisation tool for the year 2019.

The two-day meeting, chaired by the representative of the governor of the Cascades region, was attended by the majority of actors in the Water, Sanitation and Hygiene (WASH) sector, including religious and traditional leaders, decentralised state services, civil society organisations for human rights, local media outlets, driving forces in the community, technical and financial partners including the Catholic Organisation for Development and Solidarity (OCADES), IRC, Catholic Relief Services (CRS), Water4, the Regional Directorate for Water and Sanitation of the Cascades region (DREA), the Water Agencies of the Cascades region (AEC) and the Gambidi Cultural Space (ECG).

The municipal strategic plan guiding all interventions and actions

The organisers seized the opportunity of this meeting to present the Communal Strategic Plan (PSC) of public services for drinking water, hygiene and sanitation by 2030, by showing a 20-minute documentary produced with the support of IRC Burkina Faso. A visual document showcasing that the mayor of Banfora wants to make his municipality an example for WASH in the country. He wants "Banfora to become the benchmark in terms of access to sustainable water and sanitation services, for all and at all times, at the national level and beyond" by 2030.

The actual execution rate of the Annual Budgeted Work Plan (PTAB 2019) is estimated at 15%, according to the figures revealed during the meeting at which a total of 10 partners, including the municipality, participated. The results are noticeable as 445 special connections for the supply of drinking water to households, 357 family latrines, 345 sumps and two boreholes equipped with handpumps have been realised. IRC Burkina has made its contribution through capacity building and institutional and technical support in the management of drinking water supply and sanitation services and the mobilising of funds.

The financial execution rate currently lies at 8%. It should be noted that the implementation rates are very low which can be linked to a lack of funding, projections which have not be realised, weak skills of the municipal water and sanitation technical service in effective monitoring of the implementation the PTAB.

For 2020, the partners plan to intervene on all of the five strategic axes through ensuring access to drinking water and sanitation, capacity building and technical assistance to the municipal authorities and technicians in the management of drinking water and sanitation services. This PTAB, drawn up with all the actors and partners of the commune, is estimated at around 6.2 billion CFA francs.

For the coming years, several challenges have to be faced namely mobilisation of financial resources by the municipality to finance the implementation of the strategic plan for WASH, the completion of the works coming out of the Fasotoilettes campaign, the monitoring of the implementation of the recommendations formulated during the 2019 annual review and the collection of information on self-built sanitation facilities. 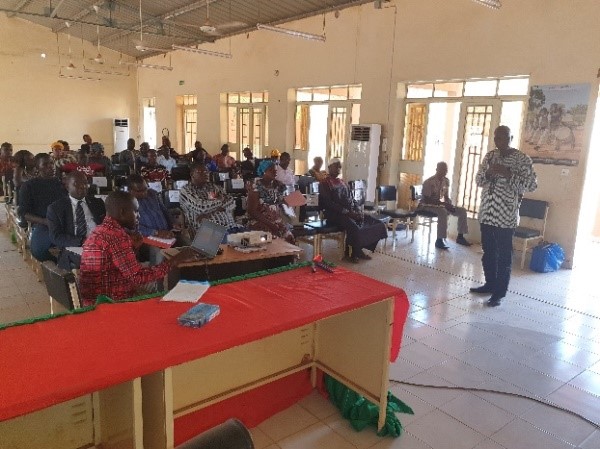 At the end of the meeting, a number of recommendations were formulated. Ranging from the completion of the works for the Fasotoilettes campaign before June 2020 to the inclusion of sufficient resources to finance activities related to WASH in the municipal budget. It was also suggested to the communication department of the commune to share the documentary on drinking water and sanitation services with a wider public with the support of IRC Burkina.

This annual review was used to take stock of the achievements of the PTAB 2019 and to draw up guidance for better performance during the year 2020. It is clear that it will be necessary to redouble their efforts in the coming years in order to realise the vision of the strategic plan which is to make the municipality of Banfora a reference at the national, and even international level, in terms of access to drinking water and sanitation by 2030.