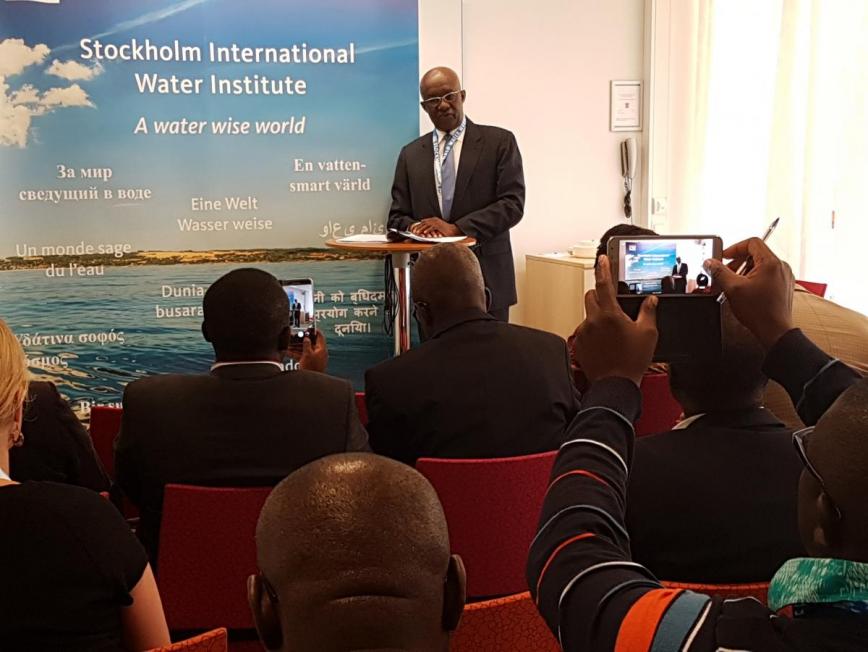 Ghana's first-ever Minister for Sanitation and Water Resources wants to 'double or triple' the budget for water and sanitation in his country to launch a total sanitation campaign.

Ambitious tasks await Joseph Kofi Adda, Ghana’s first-ever Minister for Sanitation and Water Resources. He started his position after elections at the beginning of this year, when newly elected President Nana Addo Dankwa Akufo-Addo promised Ghanaians to make Accra the cleanest city in Africa by the end of his four-year first term of office.

It’s up to Ghana’s new Minister for Sanitation and Water Resources to make the election slogans a reality. The Hon. Kofi Adda speaks at an IRC facilitated press conference at World Water Week, the world’s biggest conference on water and development held annually in Sweden’s capital, Stockholm. The Ghanaian Minister's participation was co-sponsored by IRC and Safe Water Network. Organisations that work together to achieve Ghana's ambitious targets over the coming years.

By 2020, Ghana's plan is to reduce open defecation drastically, with the ambition to completely eradicate it in the country by 2025. Around 25,300 boreholes will be constructed together with 300 small water systems. One million toilets will be built, and Accra should be Africa’s cleanest city in four years’ time. The targets contribute to the larger goal of sustainable water and basic sanitation for all in Ghana by 2025 – a goal that surpasses the global Sustainable Development Goals, which aim to provide everyone with water and sanitation by 2030. The goals are quite ambitious, the Hon. Kofi Adda acknowledges and says he will do everything in his power to deliver in time.

His new position might be more important to the country than ever. A little over 60 per cent of the population has access to basic drinking water, according to the World Health Organization. Sanitation is structurally underfunded and less prioritised. Around 14 per cent of the 28 million Ghanaians have basic sanitation: an increase of only 7 per cent since 1990. Almost 19 per cent of the population still defecates in the open. Less than 19 per cent has access to water and soap. Waterborne diseases or diseases related to poor sanitation, such as cholera, continue to affect the population. Diarrhoea kills more than ten thousand children under five every year, according to UNICEF.

“Honestly, we are not doing well”, the minister says. Three governments before him have all made efforts and ‘touched a bit’ on water and sanitation. In order to really prioritise the country’s dragging water and sanitation issues, the new government decided to set up a dedicated ministry. “We want to get rid of open defecation entirely within a few years”, Kofi Adda says. “A lot of money in Ghana goes to health and waterborne diseases, while water and sanitation services are lagging behind.”

Yet, his budget is a concern. Currently, user tariffs are paying for around 75 per cent of Ghana’s water and sanitation facilities. Donors contribute 19 per cent, but this is likely to drop in the wake of Ghana’s promotion to a lower middle-income status. To carry out the president’s vision of making Accra the cleanest city in Africa, the Ghanaian government has secured a 2 billion-dollar Chinese loan that will help to build the infrastructure needed for sanitation facilities.

For the other plans of the ministry, 1.5 percent of the country’s Gross National Product (GDP) has been allocated. In comparison, the country spent double on health and four times as much on education in 2014, according to the figures from the World Bank. This budget is not sufficient to tackle the major problems Kofi Adda is appointed to address. Kofi Adda does not seem worried. The current budget is just a baseline, he says. The minister says he will push for an increase in financial resources, aiming to ‘double or triple’ the budget next year. Building up a new ministry should be done with care, he says. “You don’t want to start with asking too much.”

Kofi Adda plans to get other ministries, such as the Ministry of Health, interested and involved in his campaigns. “An improved water and sanitation service concerns them too. When cholera goes down due to improved water points, health bills go down as well. We need to work together.” It needs time, he says. The new ministry mirrors the ambition of the government. “Everyone wants to see change.”

One of his political priorities is to launch the total sanitation campaign in Ghana: a strategy that will rally Ghana’s citizens to make the country neat and clean. Inspired by Prime Minister Narendra Modi’s Clean India Campaign, Hon. Kofi Adda hopes this campaign will ‘spread through the country’ down to the lowest level and build on existing beliefs of cleanliness. He hopes to get the whole nation involved in his clean-up campaign, with Accra as the cleanest city.

To end open defecation, his Ministry will build one million toilets in Ghana’s rural and urban areas over the coming years. A marketing campaign with ‘the messages, the music, famous ambassadors who will endorse our message’ should help to promote the proper use of the new-to-be-build sanitation facilities.

Kofi Adda speaks of an ‘incentive package’ that will stimulate the entire population to participate. Part of that package is the National Sanitation Brigade – an enforcement team to be set up, and that will see to behaviours in Ghanaian society. “Every new house should have a toilet. Landlords who construct a house without a toilet should be fined in the future.”

Whether the ministry will have sufficient resources to achieve these ambitions remains to be seen. But Kofi Adda believes it is doable. “I don’t want to be overly optimistic, but people want to do it. It is a personal ambition of the president. His team was just looking for someone to push the agenda.” In Hon. Kofi Adda they have found that person. Ghana’s water and sanitation situation will over the coming years, show how he is doing.