No growth without water

Clear calls for increased investment in water and sanitation during the Africa Water Week.

The 6th Africa Water Week (AWW6) opened on Monday 18th July, with reaffirmation that the continent could not attain meaningful development without water. Speaker after speaker stressed the importance of water for economic growth and called for increased investment in the sector as well as better strategies for its management.

With the theme "achieving the SDGs on Water Security and Sanitation," the AWW6 was described by all key speakers as an opportunity to lay building blocks for Africa to achieve Sustainable Development Goal 6 (SDG6) as well as other inter-linking goals connected with water resources management and improved water, sanitation and hygiene (WASH) service delivery. The one-week event (18th to 22nd July) is hosted by African Ministers' Council on Water (AMCOW), at the Julius Nyerere International Convention Centre, Dar es Salaam.

At the opening session, key speakers said the timing of the AWW6 was an expression of Africa's undaunted focus on achieving Vision 2030. With more than 1,000 participants from over 54 countries, AWW6 was described as the foremost forum Africa needs to influence best practice in water governance. "It is the forum with capacity to transform all areas of national economies both directly and indirectly," said H.E Mwai Kibaki, former president of Kenya and UNESCO Special Envoy on Water in Africa.

The Executive Secretary of AMCOW, Bai-Mass Taal said that AWW6 was driven by the need to achieve the SDGs as well as universal and equitable access to WASH. He noted that although there had been great achievements under the Millennium Development Goals (MDGs), there were still many people in Africa without access to potable water. Taal said that a key outcome of the AWW6 would be the roadmap for achieving universal and equitable access to WASH for all, building on the N'gor Declaration of 2015.

Taal further noted that currently, water does not feature among the top five priorities of most African governments. Governments are mainly prioritizing infrastructure, energy, health, agriculture and education – not water. "11 billion dollars per annum is required to achieve universal access to WASH. Presently we are investing 4 billion dollars per annum," Taal said, calling upon governments to increase budgets for water. "We cannot have growth without water. Governments should find innovative approaches for financing water and sanitation," he added.

In the same light, Kibaki stressed that water was the critical driver of economic progress and its availability and management were crucial to human existence. He further observed that water scarcity was perhaps the biggest challenge facing Africa today. "Africa is host to 16% of the world population but has only 9% of fresh water resources. Moreover Africa is the world's second driest continent after Australia. Africa's annual per capita water availability is well below that of other continents," Kibaki said, adding that the water situation in Africa called for urgent, firm, and clear-minded process of action. 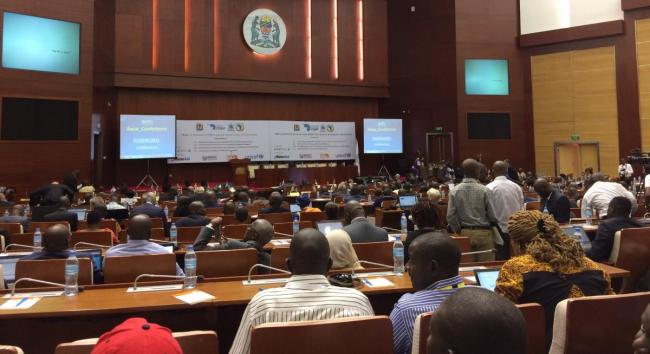 Indeed the four sub-themes of AWW6 are a reflection of the broad areas in which action must be taken to achieve SDG6. These are:

Throughout the week, participants will be addressing key issues under the four sub-themes, with a view to make recommendations for action required to achieve universal and equitable access to WASH. The Tanzania Water and Irrigation Minister, Gerson Lwenge, noted that the presence of a wide range of experience and expertise provided an opportunity to articulate key issues affecting water. "The water sector is facing huge challenges. We need to be innovative on all fronts from research to policy formulation and implementation," Lwenge said. He encouraged more scientists and women to actively participate in AWW.

The representative from the African Union Commission (AU Commission), Olushola Shola emphasized the need to utilize water resources to release Africa's potential and called for the monitoring of progress towards achieving the SDGs and other aspirations expressed in Agenda 2030, Agenda 2063 and the SDGs.

The guest of Honor, Tanzania Prime Minister Hon Kassim Majaliwa, called for increased cooperation among all actors in order to achieve SDG6. "Every action about water management requires a multi-stakeholder approach – from constructing a village well to constructing transboundary projects," he said.

Majaliwa further noted that Africa had the highest number of trans-boundary river basins in the world and their management required cooperation across the borders, at all levels. "We need to look beyond national boundaries and short term interests – as the Agenda 2030 compels us. Africa Water Week is a showcase of cooperation among countries and allows us to define a joint pathway to ensure development in Africa." Majaliwa added.

Other speakers at the event reechoed the message that no one should be left behind in the quest for sustainable WASH services. Special appeals were made for actors to extend WASH services to women and girls.

"The issue of women and girls is talked about prominently but how do we turn it into reality?", Water Supply & Sanitation Collaborative Council (WSSCC) Executive Director Chris Williams asked. He specifically called for greater investment in sanitation to end the widespread practice of open defecation. "If we are to have potable drinking water, we must be open defecation free," said Williams.

Lydia Zigomo of WaterAid appealed to participants to make ambitious but realistic decisions, noting that in the past few years ambitious declarations on water and sanitation had been made. These include the AU Vision 2063, the Africa Water Vision 2025, the N'gor Declaration, and the SDGs Vision 2030. "We need to put an African context to the SDGs and other declarations and step up the pace of establishing milestones and implementation at country level," she said, and emphasized the need to show the fundamental linkage between WASH and economic development.