When Wassa East District Assembly audited 202 water points in 2015 as part of the SMARter WASH project they found that 50% were not functional. They developed a four-year Sustainable WASH Plan to ensure sustainable access to safe water for all communities in the district.

A companion piece describes how Access Development aims to reach 90% of the population with their branded NUMA water. That leaves the water needs of more than 10,000 people to be addressed. 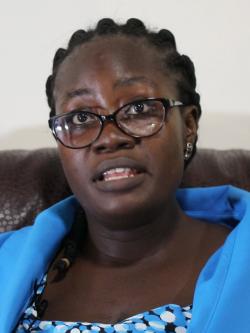 Estherine Mensah, Wassa East District Planning Officer, is hopeful that by 2023 all 192 settlements in the district will be covered for safe water as the District takes responsibility for poorer and smaller communities that cannot yet afford ‘pay as you fetch'.

The District Assembly and partners have provided 25 boreholes towards this objective and plan to budget for more in future. The district is also taking steps to strengthen water management so that communities have funds to manage their systems. “We provided facilities for the communities and we trained the water and sanitation management teams to manage their facilities. It was expected that whatever they sell, they would use the proceeds to manage the system. But you would be in the office and they would call you. ‘My borehole is not working; my hand dug well is not working - assembly come and help’.”

The link with Access Development has brought peace of mind for communities that have accepted the 'pay as you fetch' principle. But payment systems are problematic in smaller, poorer villages. “The communities where we will be providing the facilities will be basically those that will be contributing on a monthly basis or when it is the cocoa season,” Estherine Mensah says. 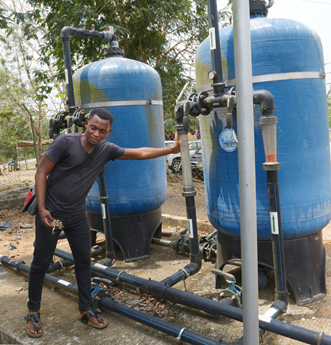 Facilities in some larger communities are being managed by the Community Water and Sanitation Agency (CWSA), including an alkaline treatment plant in Ekutuase, home to 2,700 people, where purified water is pumped to a tower and supplies eight standpipes and 33 households. By the end of 2020 CWSA hopes to have 100 household supplies.
The CWSA Technical Engineer Eric Christford Mensah says that 'pay as you fetch' and household connections will eventually ensure that the system is sustainable. “The revenue we are generating is not currently able to keep up with the maintenance and all the staff, but it is a gradual process. People are getting into the system and connecting to their households. We will surely get there.”
It costs a household around GHS 700 (US$ 125) to connect to the system but subsequent charges are low. Three nurses from the Ekutuase community clinic share a staff bungalow and they pay about 10 cedis (US$ 1.75) a month each for water from the tap just outside their door. Senior Enrolled Nurse Emmanuel Appiah says the community benefits from good water including better health. “People were fetching water to drink from the river and they didn’t boil it or treat it, and so were getting skin and abdominal diseases. These diseases have gone down since everybody in the community is using the piped water.” When water management remains in community hands, performance varies.
In Donkokrom, the District Assembly installed a borehole to replace a stream that in the dry season is reduced to little more than a pool. Caretaker and community mechanic Noah Donkor was trained to maintain the system and so far they have done well.  “The mechanic dismantled the pump and gave us the opportunity to remount it. He realised we were good at fixing the pump and will be able to fix minor faults.”  When a fault did occur, the community had enough money for a new part and Noah Donkor was able to replace a washer and keep water flowing.
But in Nyekonakpoe village, where the Assembly installed a new pump in 2016, there is currently no payment. The Water and Sanitation Management Team introduced a monthly GHS 2 charge for each household but some households preferred the water from the old pump and refused to pay. Kwabena Nkrumah, village sub chief, says this led others to stop and the payment system collapsed. This is a problem he is trying to resolve. "There is an ongoing discussion to get a woman to manage the system as 'pay as you fetch'," he said. Should the system break down in the meantime, he said, they would compel people to contribute to the repair costs. 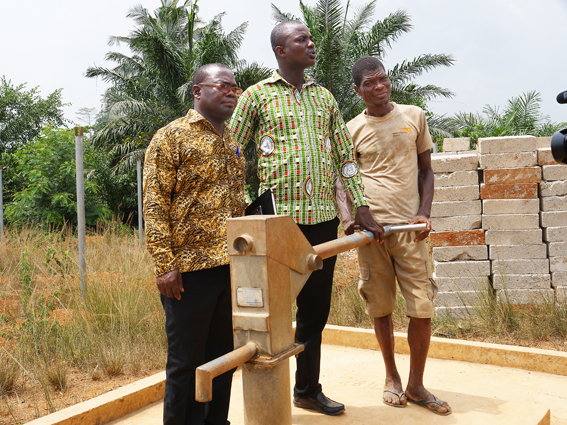 Odeb Amos Telvi, Wassa East Environmental Health Officer (left), Anthony Quaicoe, Planning Development Officer (centre) and Kwabena Nkrumah (right), sub chief, with the new pump in Nyekonakpoe community
Providing water for schools is another challenge. Access Development would like to include them, but so far (April 2020) a payment model has not been agreed. In 2015, 79 of the 93 schools in the district had no water facilities. Of the 25 boreholes planned by the District Assembly 13 were for schools, although not all of these have yet been completed. Most schools still lack water and toilets.
Overall, the district has the SDG 6 in its sights. Wassa East District Chief Executive, Wilson Arthur, said that they had reacted to a ‘scary’ situation when they discovered how low effective coverage was and adopted a programme to draw in support.  “That is how we got commitment from Access Development. We shared everything with them and so far it has been good.”
Once full coverage was achieved, the district would not let it slip. “Sustainability is one of the goals we set ourselves from year zero. We have a formula in place where we keep some of the money for maintenance so we are building in some buffer for that. I am sure by the time Access Development leaves we will have a system in place to make it sustainable.”
Go back to overview page