Dora depends on one community handpump. How are her satisfaction levels being measured, and what can we learn from them?

In the Akatsi South District of Agbedrafo, where 33-year-old teacher Dora lives, she can fetch a few buckets of water from her community borehole before pumping becomes so difficult that she often has to wait for about 15 minutes to resume pumping. This is worse in the dry season, when Dora has to wake up at around  3am to queue for water. The Water Sanitation and Management Team (WSMT), in an attempt to address this problem, introduced a coupon system of fetching on a first-come first-served basis; or rationing water via coupons. Water users who want to fetch water collect daily coupons whose serial number serves as the queuing position. Each coupon costs GHC10p and entitles the user to only one basin of water at a time. While it's a laudable attempt to address the problem, it's not without its own problems. And clearly, Dora is not very satisfied with the service she gets.

A total of 1,162 households in Akatsi, Sunyani West and East Gonja were interviewed about the level of services they receive and the performance of the service providers.

According to Dora, "even though fetching is on a first-come first-served basis, people bring very big containers which makes it difficult, if not impossible, for others to get the opportunity to fetch. Because of this I am sometimes unable to fetch enough. In such a situation I borrow from a neighbour and replace later."

Even though we have quite a bit of insight into actual service levels in Ghana, relatively little is known regarding users’ contentment with rural drinking water. In light of this, Triple-S Ghana in collaboration with Community Water and Sanitation Agency (CWSA) undertook a user satisfaction survey, to complement monitoring data on functionality, service levels and service provider performance. A total of 1162 households in Akatsi, Sunyani West and East Gonja were interviewed on seasonality and water use, satisfaction with the level of services received, and what they thought about the performance of service providers. This blog highlights the key findings on rural household water users’ satisfaction.

Figure 1 below gives an overview of the total level of satisfaction of households with all service parameters of quality, accessibility, quantity and reliability. It shows that only about half of all households are satisfied with the service they receive. The lowest satisfaction – just 44% of households – was found in East Gonja district. Although two thirds of households were satisfied with the reliability, quantity and quality of their water, less than half were dissatisfied with accessibility, the time it takes to fetch water. The main reason is that East Gonja is characterised by challenging hydrological conditions with borehole drilling success rates between 25% - 55%. Therefore, boreholes are often far apart, making people walk longer distances to fetch water.

Furthermore, reactive maintenance instead of routine maintenance is widely practiced in East Gonja. Consequently, water users abandon a broken-down facility and resort to the functional handpumps, which culminates in longer waiting time and crowding. More than half of households were also not satisfied with the price they pay for water; they consider it to be too high. And indeed, about half of households did not pay for water. Of the half that paid, 43% did so on an impromptu basis, 37% used pay-as-you-fetch, and 18% paid a monthly contribution. The peculiar groundwater development and prudent funds management may have made it problematic for the perceived accessibility yardstick to be met. CWSA guidelines advocate that a volumetric water tariff is charged and collected by water point vendors. This type of collection is termed “pay-as-you-fetch”. In reality many communities decide on alternative tariffs structures, for example a fixed-rate monthly fee, or  emergency fund mobilisation when infrastructure fails.

In Sunyani West on the other hand, the majority of households (97%) were satisfied with the amount of money they pay for water. Sunyani West is relatively a peri-urban district, communities comparatively are able to afford improved water and most practice pay-as-you-fetch for periodic and major repairs, unlike East Gonja. Households in Akatsi practice pay-as-you-fetch or monthly contributions for unlimited water supply. The tariffs range between GHC 0.025-0.05 per 20liters for pay-as-you-fetch and GHC 1.00 for those who practice monthly contribution. In both cases, over 90% of the households indicated the tariffs were reasonable and affordable.

Perception on performance of service provider

"People bring very big containers which makes it difficult, if not impossible, for others to get the opportunity to fetch..."

For those who were not satisfied, 56% households in Sunyani West made mention of poor communication between the WSMT and the community. This is consistent with the service monitoring baseline in the district which shows that only 16% of WSMTs were accountable to their communities, and this percentage reduced further to 10% during the round 2 of service monitoring.

Figure 2: Water user perception of the performance of the service providers 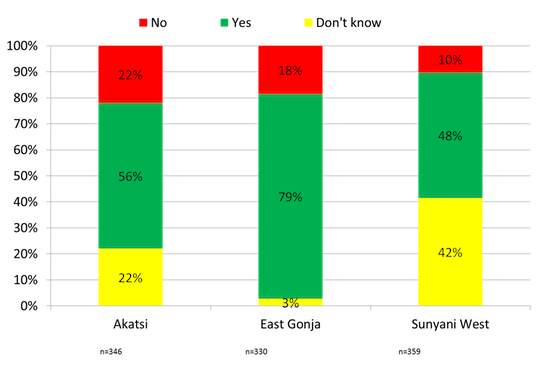 In Akatsi, a significant proportion (74%) of respondents cited management teams' misappropriation of water revenue and inadequate communication with the community as reasons for their displeasure. This perception resonates with the findings of the service monitoring, which observed that a significant proportion of management teams in Akatsi do not practice sound financial management and share financial information with communities as required (63%). The inactiveness of some of the WSMTs coupled with poor financial management practices and inadequate accountability could be the result of poor maintenances of the water facilities.

In conclusion, we observe some contradiction between actual service levels, performance of service providers and the perception of water users. Users are not too bothered about the quality and reliability of their water facilities. As Dora, however they are perturbed with the time it takes them to access water especially when the quantity of water diminishes. The issue of affordability of water tariffs is intricate depending on the location of the communities and their economic power, affordability is not an issue. However prudent funds mobilization and management is vital to ensuring that that facility is able to deliver the designed quantity of water in the dry and wet seasons.