Searching for the next India

RT @RolienSasse: Pilot in The Netherlands shows that #sewage water is a perfect source to monitor the incidence of #COVID19 infections - pr…

The recent JMP report shows how India is accelerating the rate of reducing open defecation, due to the efforts of the Swachh Bharat Mission. The question is whether there are other countries that are seeing such acceleration. Is there another India out there?

"15 years to make history, 5 years to make change" is one of IRC's slogans. It refers to the fact that the World has some five years – up to 2020 – to make the necessary plans, develop financing mechanisms, and strengthen the systems needed to speed up the delivery of water and sanitation services in the subsequent five years. In parallel, many countries would need to rapidly increase the rate with which new access is created during these first five years. Otherwise, they would not be able to reach universal coverage.

The recent JMP report, and the underlying databases, are really a fantastic resource to dig into this question. For example in figure 30 they indicate whether countries are making sufficient progress to achieve universal access to at least basic services by 2030. This analysis is based on linear regression and extrapolation. This means that a regression analysis is carried out based on the values obtained through the household surveys that form the source data, to make estimates levels of access levels now and in the past. This linear regression can then be extrapolated to estimate levels of access by 2030.

A limitation of this method is that it is not possible to capture rapid increases (or decreases) in access levels. The JMP report illustrates the apparent non-linear trend in ending open defecation in India (see page 22 of the report), as a result of the efforts of the Swachh Bharat Mission. Recent survey results from India report a rapid decrease in the percentage of the population practising open defecation. That is a clear sign of the type of change we would need to achieve the SDGs. Linear regression analyses cannot properly identify these non-linear trends.

This made me wonder whether there are any other countries where rapid increases in access are happening, or where other non-linear patterns in access growth are happening, such as levelling off of the growth rate.

To do that analysis, I focused on the 'rate of change', which is the average annual rate with which access to water or sanitation changes. In mathematical terms, it is the slope of the regression line. For example, for the first country in the JMP database, Afghanistan, the rate of change in access to 'at least basic' water supply services is calculated as 2.31. Over the period 2000-2017, on average 2.31 percentage-point of the Afghani population gained access to at least basic water services. However, in the previous JMP report (which covered the period 2000-2015) this was calculated to be 2.39. This means, that the surveys that were added to the regression analysis in the period 2015-2017 were such that they reduce the slope of the regression line a bit, from 2.39 to 2.31.

In Afghanistan, this adjustment is minor, probably within the margins of error. But in the case of India, above, the adjustment due to the non-linear change is major. In order to assess whether there are more countries with rapid increase in access, like India, I have calculated the projected access to at least basic service (both water and sanitation) by 2030, based on the 2017 report data and on the 2019 report, and compared the two figures. Based on that, I classified the countries as follows:

Countries classified as upward or downward are countries where potentially non-linear growth is happening. The exercise yielded the following results for 'at least basic water':

Table 1: number of countries classified by change in growth rate in access to at least basic water services

As can be seen, a total of 100 countries have achieved at least basic water, or would be projected to achieve that by 2030. Of the countries with an upward adjusted forecast, 8 would achieve universal coverage by 2030 and another 3 would come close (more than 95%). Of the ones with a stable growth projection, the vast majority (32) would end with more than 95% access. The countries with downward adjusted forecasts are found in the lower ranges of access.

For sanitation, the results are different:

Table 2: number of countries classified by change in growth rate in access to at least basic sanitation

The question remains whether the countries classified as 'upward' or 'downward' are really experiencing non-linear growth in the rate of change. To do so I reviewed the underlying country data sheets, available from the JMP website. This showed essentially three groups of countries: 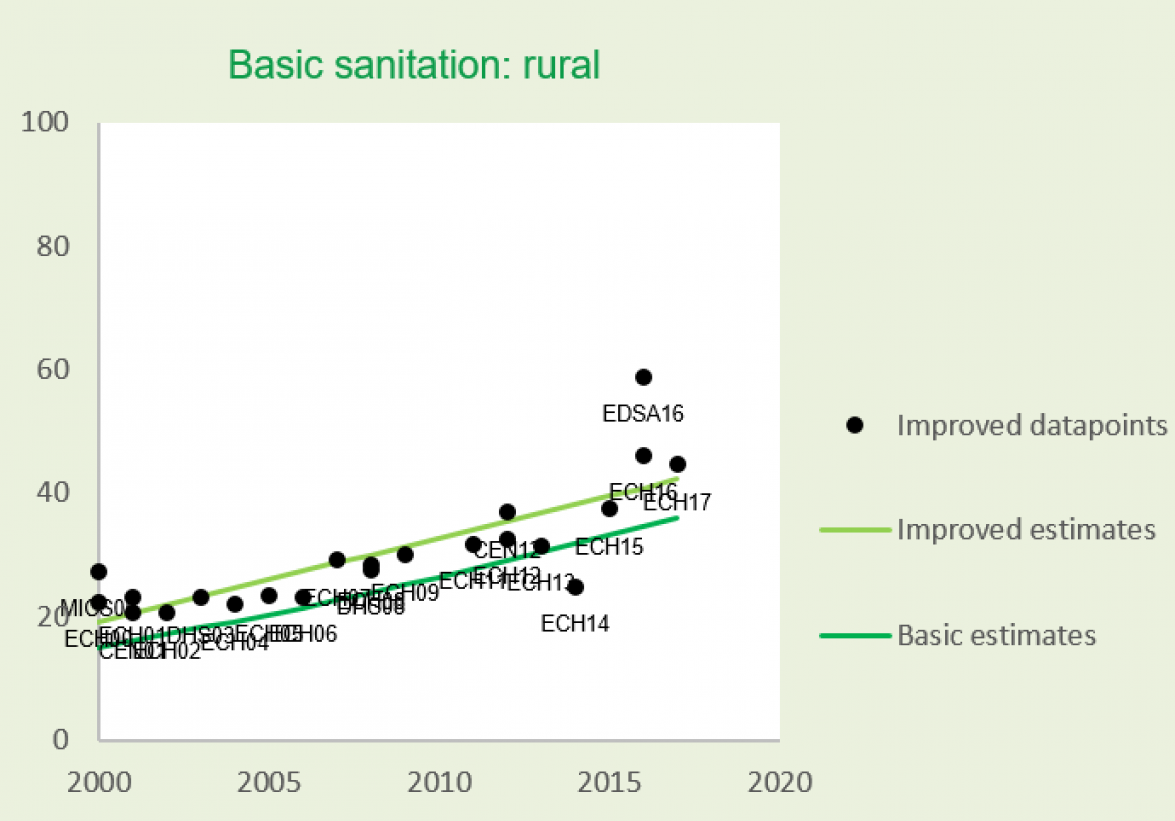 Of the five years to make change, we now have data of 2 years. These show that in most countries, no drastic change is happening. Arguably, that is not even needed in many countries with respect to water supply. Around three-quarters of the countries are projected to reach more than 95% access to at least basic water services. But for the countries where change is most needed, i.e. ones which currently have low levels of access, no signs of change were found. In fact, they are also the countries that have least data to make estimates of past, current and future levels of access.

For sanitation, more change is needed. Only about half of all countries would achieve near universal access to basic services by 2030. A big group of countries would really need to drastically increase access as they are stuck with stable growth at very low levels of access. But there are also signs of hope. India is of course a big inspiration, and this exercise has also identified Bolivia, Cambodia, Nepal and Nigeria as countries where signs of non-linear growth are happening. Hopefully, the momentum to rapidly increase access can be maintained in these countries, so they can write sanitation history.

Acknowledgements. Thanks to Marieke Adank for her review.