Sagar is an island at the mouth of the river Ganges where it meets the Bay of Bengal. Every year in January, about half a million pilgrims visit the island to worship at the holy Ganges. The hundreds of mobile toilet units standing on the empty festival terrain during the rest of the year are witness to the island’s authority’s efforts to ensure that the pilgrim’s stay on the island is as comfortable, hygienic and safe as possible. But the authorities also don’t forget about the 200.000 permanent inhabitants when it comes to sanitation. Together with the NGO Water For People (WFP) and other partners, it seeks to achieve full coverage in sanitation and water supply in the next few years.

Over the past 10 days, I have been doing data collection for a study report (available below) on the experiences of Water For People with its Everyone, Forever programme on Sagar and in Patharpratima, another block spread out over several smaller islands of the Sundarban region

The results show that these are real islands of success. Some 6 years ago, the coverage in water and sanitation in both blocks was around 40-50%. Now, coverage stands at 90-95% - depending a bit on which statistics you use. A mapping exercise using FLOWshowed that there are enough functional water points (typically deep tubewells with a handpump) to cover the entire population. But there is widespread agreement that this fails to account for the distance people have to walk. Taking that into account there are several pockets of population that are not adequately covered. Likewise, several Gram Panchayats (lowest unit of government, akin to a municipality or county), have been declared Open Defecation Free in the past years, but since then several new families have come up who haven’t built toilets. 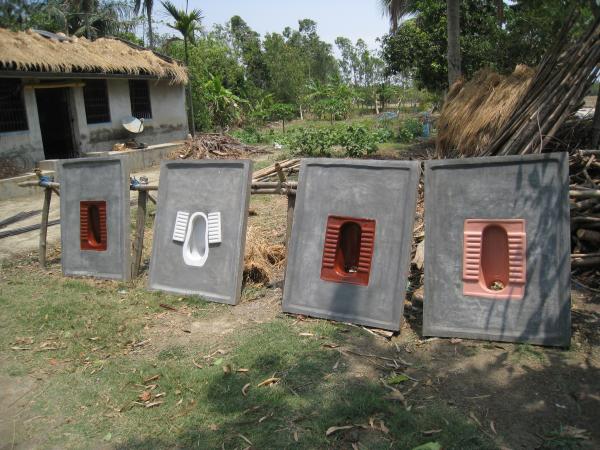 Still, it is a great achievement to have such an increase in access. So how was this achieved? First and foremost, this is due to substantial investments by the different levels of government. It has subsidies available for sanitation slabs and materials for families below the poverty line and other household categories, such as female-headed households. Through active promotion and awareness campaigns, families have been encouraged to use the subsidy to buy the slabs and invest some of their own money in digging pits and building simple superstructures (often just plastic and bamboo). Likewise there have been big investments by government in putting in new tubewells and rehabilitation of existing ones. Water For People – working mainly through local NGOs – has been joining government’s efforts, realizing that the financial contribution an NGO of its size and nature can make are always relatively modest compared to government investments. It has done so by pooling and complementing funds with local government. For example, in water, it has been pooling its own funds with those of government on a cost sharing basis (initially something like 80-20%, but now closer to 50-50%). In sanitation, it has taken a complementary approach, reaching out to people ineligible for the subsidy (because they are just above the poverty line), and providing them with interest-free loans, so they could also invest in their own toilets. In fact, it was found that many families who did get the government subsidy, also took out an interest-free loan to top-up the subsidy, so they could invest in a better superstructure. All in all, this has meant that WFP has contributed to about 10 to 15 percentage-point increase in coverage in water and sanitation.

Although this is greatly appreciated by the authorities and communities alike, this is not where they see the added value of WFP. Sooner or later, government could have reached these communities on its own account as well. The interviewed stakeholders see the real added value in the ideas and innovations that WFP has brought to tackle the issue of Forever, or the sustainability of the services being installed.

When the programme started downtime of water points was often several months. The Gram Panchayats, as the de facto service providers, often spent lots of time looking for mechanics or contractors to carry out repairs. Communities had little trust in the Gram Panchayats doing quick repairs. A first approach to improve the situation was the establishment and training of a network of handpump mechanics, called Jalabandhus. These Jalabandhus are private entrepreneurs who can be contracted by anyone for repairs. Some of the ones that were initially trained have since then left, and new ones have come up. There is often quite a bit of competition between them, and some of the best and most active ones have taken a chunk of market share of the ones that don’t perform so well. As a result though, there are now 1 or 2 Jalabandhus in each Gram Panchayat area. When a pump breaks down, the community can directly call the Jalabandhu. But the first question the Jalabandhu will ask is “who will pay?”. If the community has the money to cover his remuneration and materials, he will do the repair within 1 or 2 days. If the repair is bigger, the Gram Panchayat can also pay, but then it takes a bit longer to have the repair done, as the Jalabandhu will first assess how big the repair will be, provide a quotation to the Gram Panchayat and then wait for the order from the Gram Panchayat to do the repair and guarantee the payment. This may take 4-5 days.

To the outsider, these arrangements of handpump mechanics and water committees may not come across revolutionary new ways of addressing the sustainability of rural water supply. In fact, they form part of the standard package in many rural water programmes. However, in a context where local government has been a de facto – but not well-performing - service provider, they do form an important change towards more sustainability. More importantly, the combination of these local arrangements with the relatively large amounts of funding that government provides may in fact prove to be the right mix. Where water committees and handpump mechanics have often failed is where there was no support from local government. And even though there will surely be big challenges ahead in addressing sustainability of WASH on these islands, still this programme has shown how NGO investments and innovations can be leveraged through government investment programmes and thereby moving from islands of success to reaching Everyone, Forever.