Rwanda in the fast lane for sanitation

Around 30 percent of the national budget of Rwanda is made available to district authorities.

This high share makes Rwanda a front-runner in Africa, Stephan Klingebiel and Timo Mahn, two German banking specialists write in the June 2011 edition of Development and Cooperation, (Vol. 38.2011:6). In only a few years, the country has considerably improved its public financial management. And the reform impetus started in the country itself. Donors helped to mobilise reform forces, but no one questions Rwanda’s leading role.

A similar drive can be reported on sanitation. "From the ruins of years of war and genocide, Rwanda has moved to improve household access to hygienic sanitation  facilities faster than in any country in Sub-Saharan Africa", writes Nitin Jain in the July 2011 Getting Africa to meet the sanitation MDG: Lessons from Rwanda.

And from my four days in Rwanda during the AfricaSan3 Conference in July 2011 I can confirm this reality. I had talks with a national planner who finances district level Training of Trainers on Sanitation and Hygiene, district level officials who were trained and Community Mobilisers who trained village level Community Health Workers. I also visited and talked to the Community Hygiene Club in Rwangala umudugudu (village) in Kazence cell, in sector Ntamara, in district Bugesera, Easter Province, some 30 kilometres out of the capital Kigali.

When we enter the Rwangala village to find out how the Community Hygiene Club works in practice we see a large group of women in white WaterAid T-shirts wave goodbye to a bus full of other participants from the AfricaSan 3 Conference. 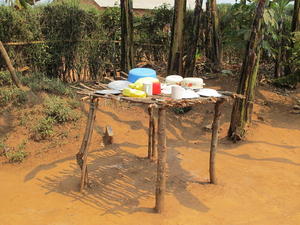 With a smaller group we squeeze into a small meeting room. There we talk to Marie Louise Uwigize who heads the Sanitation and Hygiene workers, Bering Musengamana, president of the Hygiene Club, Petronille Nkwibonzere, one of the four Community Health Workers (CHW) and Florence Umware, Member of the club.

Q: What do the Community Health Workers do?

Petronille: We sensitise the people in weekly meetings on different government hygiene and health programmes. Sometimes we talk about hygienic practices, HIV/AIDS prevention, malaria prevention and oral rehydration solution (ORS). Or we discuss nutrition with help of posters. We always use the open space for these sessions. Every last Saturday of the month there is a national sanitation service day (Umuganda). Three months ago we installed toilet slabs.

So far nearly 80 per cent of the 15,000 villages in Rwanda have formed hygiene clubs. Environmental Health Officers from the Ministry of Health have trained 45,000 Community Health Workers, on average three per village, as part of the Community Based Environmental Health Promotion Programme that was launched in December 2009. The plan is to have 60,000 health workers trained in 2012 and to scale this up to all the 30 districts in the country.

School toilet realities from the field

On the Friday 22 July 2011 on a field visit in Rwanda we are looking at two plastic, injection moulded Mobilet toilet blocks with five seats for boys and five for girls at the Kicukiro Technical Training Centre funded by South Korea, just outside Kigali. The toilets were supplied in May 2010 by the private company AquaSan at US$ 11,000 for the complete installation under contract from the Ministry of Education.

The blocks have a specially shaped vent pipe against flies entering and they have a plastic tank that is used to collect rainwater for the handwashing unit. So far the company has installed 40 Mobilet blocks in Rwanda. 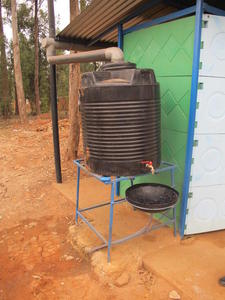 Later the same day, we visit two ecological toilet blocks on the Kigali highway that turn out to be not hygienic at all. Our first stop is just outside the Rulindo District headquarter in the Northern Province, where we meet Mr. Diogene Bitunguranye, Acting Executive Secretary of the elected District Council. He was holding the fort, as the Mayor, vice Mayor, Executive Officer and Budget Officer were preparing the sanitation targets for the next financial year to be presented to the President the following week.

Since 2008 they have constructed 11 of these Ecosan toilets, three on the main roads, and eight at primary schools on the initiative from parent-teachers associations. Six of these were supported by UNICEF. 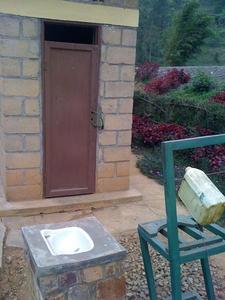 We visit the Ecosan block on the road opposite the district offices. From a distance it looks OK, with a wash basin, soap and a tippy tap in place. On closer inspection inside the toilets we get a shock, I see light from the collection chamber through the slab. In fact the collection chambers are 120 litre open drop boxes that are not linked with the slab. This means that flies from the excreta can still spread disease.

Jackson Mugisha, Environment Facilitator of the Ministry of Local Government is grateful that I point this out to him. He says: “I have to send the Ministry of Infrastructure people here to check your observations that these are not hygienic ecological toilets. It may be that the construction teams require more training. Maybe all the technical teams require more training”.

See for more on this.