According to the Uganda Water and Sanitation Network (UWASNET) NGO Performance Report 2018: “For the FY 2017/18, NGOs invested a total amount of Uganda Shillings (UGX) 91.02 billion in interventions in water supply and sanitation improvement, water resources management, community strengthening for management and sustainability as well as towards promoting good governance in water and sanitation service delivery. This expenditure is the highest recorded in the last five years, a two fold increase from last year, majorly due to reporting on WASH in Emergency that was previously not included in the NGO report. This notwithstanding, there is a 40% increase from last year, for non-emergency interventions, with expenditure on water supply infrastructure accounting for the largest proportion of the related FY2017/18 expenditure, at 57 %. Generally all intervention areas registered an increase in expenditure from the previous reporting year.” (page 4)

The Uganda government recognises the contribution CSOs are making to increase universal access to WASH services and is placing them at the centre of its plans. After aligning the WASH sector performance measurement framework with the SDGs, the Ministry of Water and Environment (MWE) reached out to CSOs to disseminate the new indicators.

As MWE’s Martha Naigaga said during the National WASH CSO Forum in Kampala in September: "CSOs are important partners in the WASH programme. We want to align and make sure that CSOs understand what the sector is measuring so that they are able to structure their interventions, their measurements, their programmes, and everything, to what the sector is measuring. Otherwise they will end up implementing things that are not countable or they will lose focus." 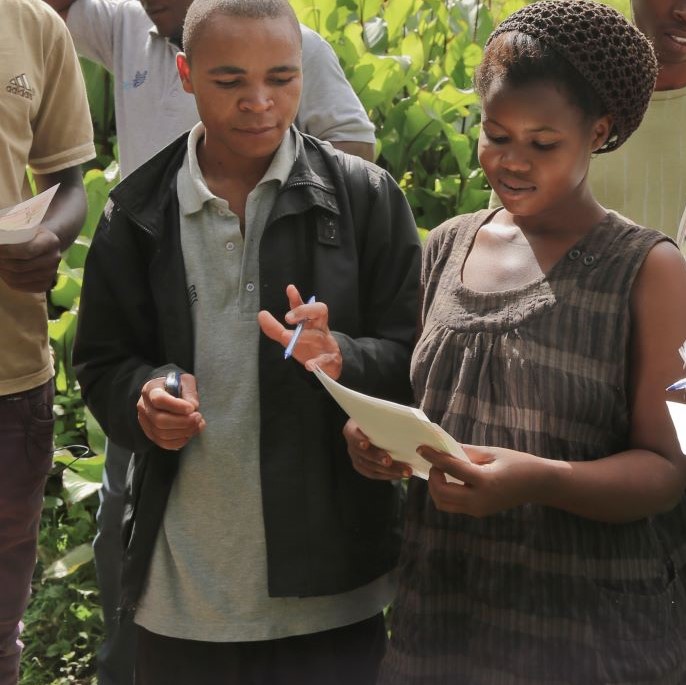 In Kabarole, the district local government (DLG) has taken steps to align the WASH master plan with the annual district plan as well as with the national monitoring framework and the global indicators.

The relationship between CSOs and the local government has been nurtured to the extent that the Kabarole District Master Plan for Universal Access to WASH Services 2017–2030 carved out an explicit role for CSOs. According to the master plan, CSOs “will be responsible for mobilizing off-budget resources to directly support implementation, monitoring and learning interventions.”

In that spirit, HEWASA (Health through Water and Sanitation) has collaborated with the local government by co-funding the construction of piped water systems. One such system was constructed in Kasenda sub-county in 2005. It remains operational and, to ensure sustainability, has since been taken over by the South Western Umbrella of Water and Sanitation.

According to Moses Rujumba, programme officer with HEWASA, CSOs support the district local government not only in material terms, but also by sharing information about best practices and the lessons they have learnt based on their experiences on the ground.

One thing that makes this relationship work is that Kabarole has a functional District Water and Sanitation Coordination Committee (DWSCC). The DWSCC is responsible for coordinating the activities of CSOs including non-governmental and community-based organisations.

CSOs in Kabarole operate with off-budget funds from private sources and development partners. Although their budget cycles are not necessarily aligned with that of the local government, they contribute substantially to the district’s resource envelope. In 2016 and 2017, for instance, HEWASA contributed grants worth UGX 260 million per annum while IRC contributed grants to the tune of UGX 200 million per annum. Other CSOs including SIMAVI, SNV, Aqua for All, Stars Foundation, and AAID have pitched in with notable contributions as well through grants to support water supply and sanitation in Kabarole over the years.

Whereas the Kabarole District Local Government allocates budgets for providing direct support to water and sanitation committees, it can only provide technical support to fewer than 40% of service providers. Such performance data is critical for planning purposes.

In Kabarole, data on the performance of service providers is collected annually and used to update the district’s information system. CSOs such as IRC, HEWASA, and JESE (Joint Effort to Save the Environment) have played an instrumental role by supporting the district to carry out this critical performance monitoring function. Monitoring generates the evidence needed to inform WASH investment and budget allocation decisions.

To ensure effective coordination, CSOs are represented on the district’s resource mobilisation team led by the chief administrative officer and comprising the district planner, the water officer, the secretary finance, and the health inspector. The mission of this team is to bring in additional funding from sources other than the conventional district budgets.

According to Aaron Byakutaga, the Kabarole District secretary for works, CSOs have played a critical role in supporting the local government to advocate for universal access to WASH and to lobby for resources and community engagement.

IRC supported the District Water Task Team to pilot the pay-as-you-fetch (PAYF) model at selected water points, and IRC also funded the study that evaluated the model to help inform decisions about scaling it up. The analysis of the model showed that it was more effective in rural growth centres than it was in urban areas. Advocacy by CSOs has been critical in promoting the benefits of PAYF and its adoption beyond the communities where it was piloted. 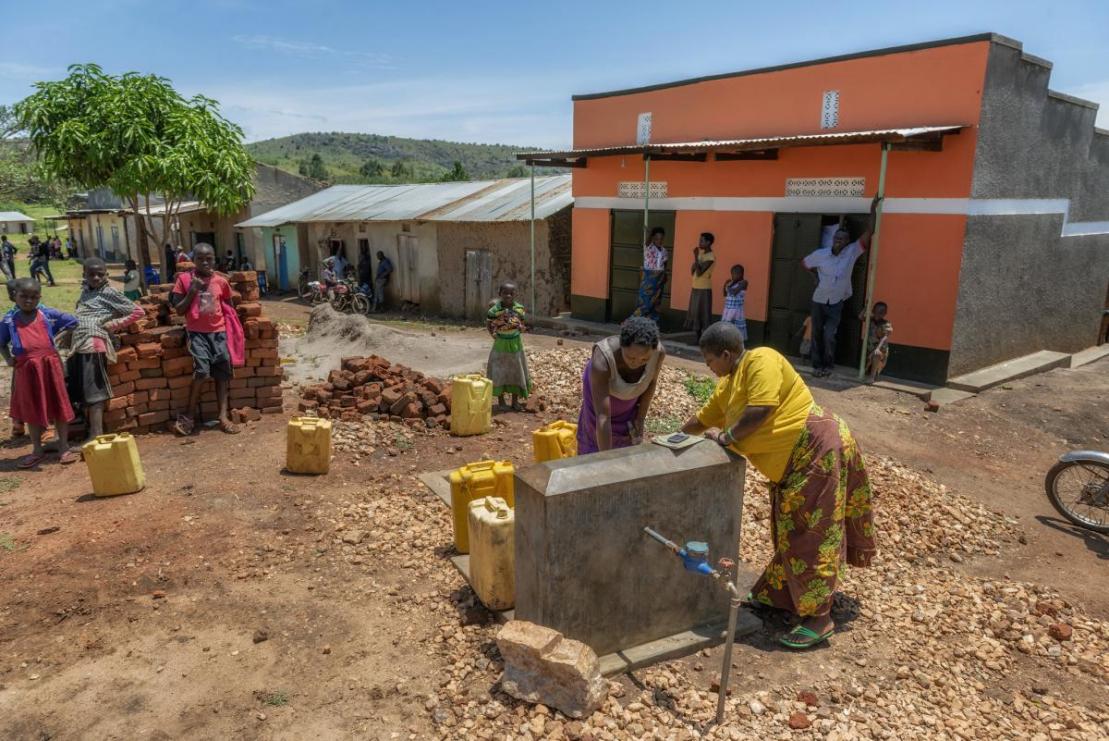 Kabarole is reaping dividends from the involvement of and collaboration among CSOs. “We do a lot of activities together,” says Edgar Muganzi, project manager with NRDI (Natural Resource Development Initiative). “We leverage each other’s expertise.”

NRDI turned to HEWASA for support with the construction of water sources in its project areas. When NRDI attempted to construct latrines in Karago town council and in Bukuku and Karangura sub-counties, it discovered that it could not sink latrines deeper than five metres because the water table was high. It approached HEWASA to support the construction works including provision of eco-san toilets which NRDI made available to its clients on a 50-50 co-share basis with a promotional discount of UGX 700,000 from UGX 1 million.

PROTOS too partnered with lower local governments to build eco-latrines in Karangwa and Kichwamba sub-counties and in Karago town council. It provided a portion of the funding through cost-sharing arrangements with the respective local governments. With such developments, the political leadership at the national level has come to embrace CSOs as valued partners in elevating the standard of WASH.

Reflecting on the discussions that ensued during the National WASH CSO Forum in Kampala in September 2019, Hon. Oyo observed that: "Civil society organisations are closer to the people than ever, and they have helped in changing the thinking of the people. They have seen that the situation [of WASH] is that bad and they are getting engaged. Everywhere it’s the civil society organisations that people are listening to."

A critical challenge is how to ensure that CSO activities and interventions are aligned with the objectives of the DLG and the central government. The solution is for CSOs to involve the DLG and the MWE Technical Support Unit 6 (TSU6) in planning, implementation, as well as monitoring and evaluation of their activities. This is vital for ownership, sustainability, and continuity.

Another challenge is the fact that the Rwenzori Regional Learning Forum has since become dormant, yet it used to serve as a platform for sharing information about plans and activities as well as sector policies and legal frameworks. Efforts to revive the forum should be pursued with a sense of urgency.

Testimonies about the role of CSOs in the WASH sector

CSOs play an important role in terms of bringing innovations into interventions that work. Most of the interventions especially in sanitation that have come into the country have been pioneered by CSOs. They give us an opportunity to pick on what works. But also they help us to improve policies, because through their innovations and programmes we are able to design policies that we know will work. They help us to check on what is not working, which definitely improves our performance. They are key in resource mobilisation. Sanitation is multi-sectoral. The government alone cannot address all the needs for sanitation and hygiene in the country. When they bring their expertise in form of technical know-how and finances, it improves service delivery overall. - Stephen Kayanja (National WASH CSO Forum September 2019)

CSOs play a big role. One is capacity building. As a senior community development officer, I was only triggered when they gave us the results [on water quality]. In my normal routine I did not know. All that mattered is: is the water source functioning? Are people getting water? It’s the CSOs that helped me to realise that although we’re campaigning for water, there is a problem with the water we’re supplying. They helped us as an eye opener that what we were doing was not enough. Second, they help us a lot in funding. In the local government we don’t have enough funding. But they helped us in the collection of the data, analysing it, and presenting it. - Kellen (National WASH CSO Forum September 2019)

Leaving no one behind

Views on the role of Civil Society Organisations were captured by IRC Uganda during the 2019 WASH CSO Forum in Uganda.