Ton was a steadfast champion of the cause of sustainability based on respect and support to national actors and institutions. 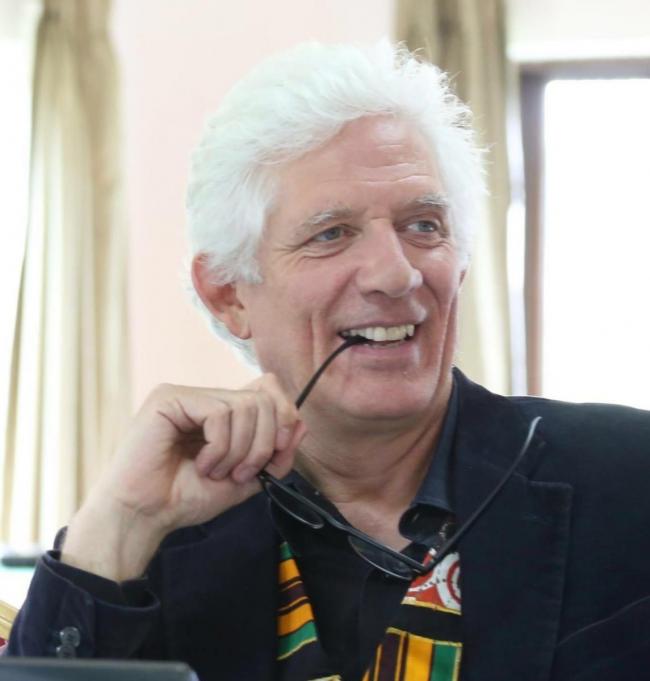 IRC and the wider WASH world have suffered a grievous blow with the death of our friend and colleague Ton Schouten. Ton died suddenly on the afternoon of Sunday the 22nd May of a heart attack, while rowing in Delft. Rowing was a sport which he had rediscovered in the last few years and which had become a source of great pleasure to him. Indeed, he had only recently returned from taking part in Venice’s famous Vogalonga Regatta – regaling us all with stories of rowing around the lagoon with other fancy-dressed participants.

Ton worked with IRC for more than 17 years, first as a consultant film-maker before becoming a member of staff in 2001.  A documentary film maker by original training and vocation he joined the WASH world through a Master’s Degree in Rural Development Sociology and Communication Sciences from Wageningen University.

Ton quickly became a core member of the team engaged in transitioning IRC from its roots in the Ministry of Environment to today’s independent think-and-do tank. In doing so he played many roles, in all of which his natural warmth, intelligence and empathy made him one of our most dearly loved mentors and leaders.

Ton was equally a leading figure in the WASH sector, a steadfast champion of the cause of sustainability and above all of an approach to development that was based on respect and support to national actors and institutions. Most recently Ton’s contribution and standing was recognised through his chairing of the Rural Water Supply Network – a position to which he brought his usual wit, commitment and passion.

During his time at IRC, Ton led some of IRC’s most important projects and initiatives including Triple-S (Sustainable Services at Scale), RiPPLE and SMARTerWASH. He supported IRC’s Ghana country team in its strategies for sector change, managing its country partnerships and acquiring new assignments and contracts.Ton was manager of IRC's Fundraising and Business Development department and a member of the Management Team.

Ton brought his original passion for film making to IRC, producing the Seventh Video in 2000, a compilation of lessons on community water management from Nepal, Pakistan, Cameroon, Kenya, Colombia and Guatemala. The video’s key message: that governments cannot leave rural communities with the full responsibility for the management of their water supplies, but should use their power to provide the support that communities need, was one that lay at the heart of all Ton’s subsequent work. Ton later used clips from the Seventh Video for another video “What if?”, which illustrated the concepts behind the ‘Sustainable Services at Scale’ (Triple-S) initiative.

Other significant works that Ton co-authored include “Doing things differently: stories about local water governance in Egypt, Jordan and Palestine” (2008) and “Community water, community management: from system to service in rural areas” (2003).

In recent years Ton became a champion of sector monitoring as a critical building block for national ownership and sustainability. It was with great pride that he organised IRC’s 2013 international symposium on “Monitoring sustainable WASH service delivery” in Addis Ababa.  The outputs of the symposium formed the basis for a state-of-the-art book on WASH monitoring, for which he was co-editor: “From infrastructure to services: trends in monitoring sustainable water, sanitation and hygiene services”.

To all who knew him Ton embodied intelligence, warmth, love of life and above all a profound humanity.  His untimely death leaves a huge hole in our personal and professional lives.  For now as staff, colleagues and friends we stand united in our shared grief at this untimely loss, and in our memories of a very special human being.  At this difficult time, our thoughts and prayers go out to all Ton’s huge network of friends and contacts, and above all to his close family.

Ton’s funeral took place in Delft on Monday, 30th May (see his funeral card). His family invites you to register your condolences on www.memori.nl/ton-schouten.