Do not miss another great webinar by Sanitation and Water for All coming up Thursday 9 April. Tune in to hear what… https://t.co/NvG0DCYd8M

IRC Ghana is partner in a new pilot called the 'District Based 100% Full WASH Coverage Initiative'.

Asutifi North District in Ghana is working on a Water, Sanitation and Hygiene (WASH) masterplan that ensures everyone will have access to sustainable safe water, sanitation and hygiene services by the end of 2030.

Water expert Jeremiah Atengdem contributes to providing more than fifty thousand people in Ghana’s Asutifi North District of the Brong-Ahafo Region with clean water, sanitation and hygiene services. An ambitious challenge in an area that struggles with environmental problems, urbanisation, and dispersed rural poor. “If not mitigated, it can affect sustainable WASH delivery”.

By working in one district, the organisations want to demonstrate that it is possible to reach full coverage for sustainable water and sanitation services in rural areas. If it is successful, they want to replicate the process in other parts of the country.

Atengdem and his colleagues picked Asutifi North for the pilot after a ‘rigorous’ selection process. It has a mix of rural areas, small towns, and peri-urban settlements with a population of 2000 and more. They used data on existing water facilities, how they were functioning, whether service providers were doing their jobs, and their performance in national assessments of the District Assemblies.  “Asutifi North had the most conducive policy environment for promoting WASH”, says Atengdem. “It has the requisite capacity at the District Assembly and also from the private sector and NGOs to deliver WASH services.”

On paper, it might look relatively easy to an outsider to achieve this. However, Asutifi North District has some major environmental issues, like the use of chemicals in agriculture along riverbanks. The district is known for its cocoa production, but also for gold mining. Legal and illegal mining have affected the environment. In some parts of the district, there are serious problems with surface- and groundwater

The mining company is making an effort to minimize its impact. It is working with IRC and other organisations in the district on providing water services. They have set up a development foundation to support communities within their concession area, and they want to work with us to improve the WASH situation in the district, Atengdem says. 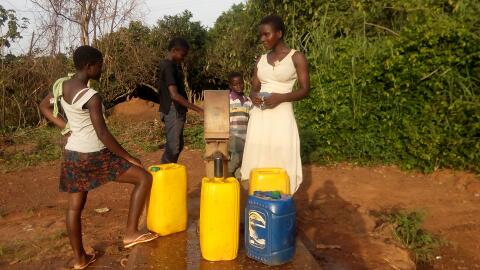 Atengdem is pleased with the response he gets in towns and villages of Asutifi North District. “People are genuinely excited that they will get sustainable WASH services and that they are involved in the planning, right from the start.” In the past, they have seen organisations install water and/or sanitation facilities and then leave.

One challenge is to convince local people that they have to pay for water. Particularly in rural areas, people assume that water is free. However, installing systems, maintaining them and keeping a service running costs money. “What people pay for water now barely covers the operational costs”, Atengdem says. “People who work in the mines are willing to pay, but farmers in the villages - who form the majority in the district - are too poor to contribute”, he says.

Despite the hard work that is still needed in the district to bring water, sanitation and hygiene to every household, Atengdem is hopeful. This is mainly because local government is buying into the vision of getting water services up and running and reaching everyone. The district’s new Chief Executive, appointed after the last elections of 2016, made clean water a top priority. “This is a welcome partnership for us”, Atengdem says.

Atengdem’s team just completed the collection of data on the current water and sanitation situation in the district. This year they will develop a masterplan that provides the blueprint and strategic direction for the district. When the masterplan is in place, a four-year plan will be derived from it and incorporated into the District Medium Term plan (2017-2021) by the district’s authorities, and the work will begin.

IRC will support the staff of the District Assembly, for example with making business cases for those parts of the plan which are not funded yet. IRC will also play a major role in keeping everyone on board. “It means facilitating all partners’ respective roles, reducing conflicts and keeping harmony between all parties.” Atengdem is positive about his work in Asutifi North District. He hopes that this initiative will bring WASH to everyone, and that it will be replicated in other districts in the country.