In Asutifi North District in Ghana, the local government works with IRC, Safe Water Network and World Vision (Conrad N. Hilton Foundation partners) to make it the first Ghanaian district where everyone has access to safe water, sanitation and hygiene services by 2030. 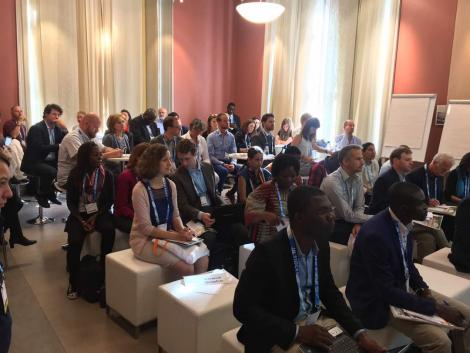 It’s the first day of Stockholm World Water Week 2017, it is early morning, yet one conference room in the heart of Stockholm is packed. No more people are being allowed to enter the meeting room anymore. Inside, Vida Duti of IRC Ghana is speaking passionately about the district-based initiative in Asutifi North she is facilitating to achieve SDG6: universal access to water and sanitation by 2030. 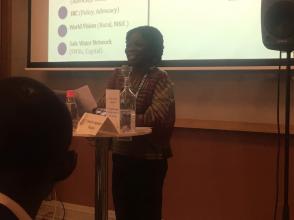 Asutifi North District is one of Ghana’s 216 districts. The district’s economy is mainly driven by agriculture, employing about 58 percent of the households. A major mining company in the region employs a substantial part of the population. With support from the Hilton Foundation; IRC, Safe Water Network, and World Vision work in this district to reach full coverage, hoping their theory of systems building will eventually be replicated elsewhere in the country.

In Ghana, around 62 percent of people living in rural and small towns have access to water. In Asutifi North this is 65 percent. IRC and its partners picked Asutifi North for this pilot after a ‘rigorous’ selection process. It took account of a mix of rural, small towns, peri-urban settlements with a population of 2,000 and more. They used data on existing water facilities; looking at how they were functioning, and whether service providers were doing their jobs.

To get access to water for everyone, IRC believes that involvement from the government is essential, Duti explains, that there is clearly ‘buy-in’ from local and national government in Ghana, and this is visible in the room: Ghana’s first ever Minister for Sanitation and Water Resources, Hon. Joseph Kofi Adda is present at the meeting. So are several of Asutifi North’s local authorities.

WASH is a priority for the government, the minister assures. The Ministry is dedicated to delivering WASH to all, Kofi Adda says. 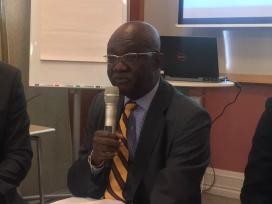 Often, lack of public finance and political commitment are major obstacles for the WASH sector, says IRC’s CEO Patrick Moriarty. Whether the minister will raise the issue in cabinet meetings and with the minister of finance remains to be seen.

Vida Duti hopes that the Minister will help to get the lessons learned in the district scaled up in the whole country. About the chances in Asutifi North to reach everyone, she is optimistic. “If we work together, there is no reason we can’t get to SDG 6: reaching everyone”, Duti says.