Ministerial delegations from 40 countries have announced serious commitments to tackle the global water and sanitation crisis. 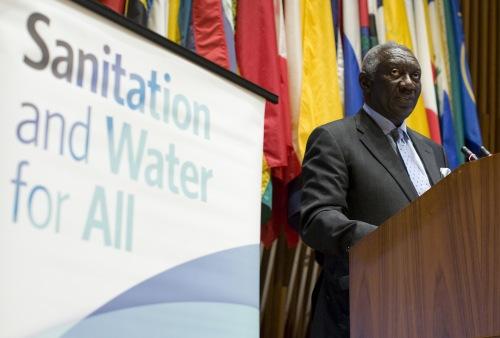 H.E. John Agyekum Kufuor - Former President of Ghana and Chair of Sanitation and Water for All

Convened by UNICEF and hosted by the World Bank and Water and Sanitation Program (WSP), the second High Level Meeting (HLM) on Water and Sanitation of the Sanitation and Water for All (SWA) Partnership took place on 20 April in Washington, D.C. On the previous day, ministers responsible for water and sanitation from 40 countries in Africa, Asia and Latin America had met to prepare a joint statement.

At the High Level Meeting, the Netherlands Secretary of State for Development Cooperation Ben Knapen announced a new cooperation between the Netherlands and United Kingdom with UNICEF and local authorities to bring water and sanitation to an additional 10 million people in nine countries – mostly fragile, post-conflict states in West and Central Africa. The Dutch commitment is part of a four-year plan to bring safe drinking water and sanitation to 25 million people.

“I am very pleased with the fact that UNICEF is prepared to guarantee the operation of water systems, pumps and last but not least water quality for at least 10 years. It’s not just about installing water pumps but providing sustainable services to the user. Independent third parties will monitor a representative sample of water points on an annual basis and report back to us”. He added: “UNICEF greatly appreciates Dutch knowledge and expertise in the field of drinking water and sanitation. At least 20-25% of the Dutch support will therefore be used to deploy Dutch knowledge and expertise to achieve sustainable results and local capacity building.”

The UK Secretary of State for International Development, Andrew Mitchell, announced that the UK is doubling the number of people they intend to reach with water, sanitation and hygiene education by 2015, from 30 million people to at least 60 million people globally.

USAID Administrator Rajiv Shah (USA) en Director-General of AusAid  Peter Baxter (Australia) announced at the High Level Meeting that they would join the Sanitation and Water for All Partnership, which now has over 80 members. USAID and the U.S. Department of State are committing US$ 1 million to the Water and Sanitation Program (WSP) to support the SWA-led National Planning for Results Initiative (NIPR).

Sanitation and Water for All (SWA) is a partnership of governments, donors, civil society and international organisations. It was established in 2010 as an initiative of the Netherlands and the United Kingdom to help developing countries, especially those that are most off-track, to reach the 2015 Millennium Development Goal (MDG) targets for water and sanitation.

The IRC International Water and Sanitation Centre is a member of SWA and of the SWA Steering Committee. IRC supported several countries, including Ghana, Mozambique and South Africa, to prepare their inputs for the SWA High Level Meeting.

For reactions on the High Level Meeting read the press releases from End Water Poverty, UNICEF, WaterAid and WSP.