Thinking beyond the finish line: sustainable sanitation services for all

Today we were told that the Siem Reap (or Angkor Wat) half marathon has a clear finish line, but that it is unlikely that anyone of us will reach that mile stone.

Now is there such a thing as a finish line for sanitation? And if so is this reached when a district has reached Open Defecation Free (ODF) status?

These were the main questions raised during the first morning of a regional learning event organised by the Ministry of Rural Development and SNV Asia in Phnom Penh, Cambodia. Participants are coming from Bhutan, Cambodia, Indonesia, Nepal, and Vietnam and from Kenya and Uganda. In a D-group discussion, on the same topic that was held prior to the learning event, most of the contributors agreed that ODF could at best be seen as an initial mile stone towards a situation where every citizen of this world will have access to and practice improved sanitation and hygiene. This will require sustained behaviour change and to be able to sustain these behaviours everybody will need to have access to sustainable sanitation and hygiene services. This means going well beyond the construction of basic sanitation and handwashing facilities. 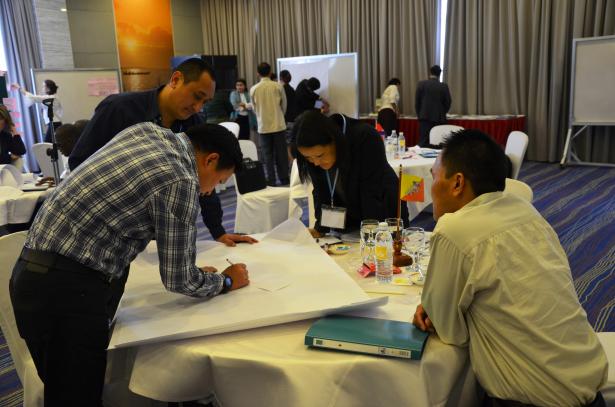 During the subsequent discussions a number of key elements were mentioned, for example: access to improved sanitation facilities with increased comfort and convenience, access to new technology innovations that promote for example safe containment of faecal waste, a flourishing private sector that provides all the necessary products and services to repair, improve, upgrade but also empty the sanitation facilities, and governments that continue to lead the sector but who also ensure that faecal waste is treated and reused safely. Access to sufficient and safe water for drinking, washing, bathing but also necessary for flushing and cleaning the facilities was brought up by almost all the countries. One could get the impression that with the ongoing drive (some called it movement) towards universal access to sanitation water supply is starting to fall behind.

Part of the day was spent in country teams, consisting of government representatives and SNV advisors, to develop a vision for sanitation. Considering that the different countries find themselves at different stages of development and may have different dreams, unique country specific visions were presented. All countries added other aspects such as universal access to safe drinking water, solid waste management, safe food handling, and so on. Overall the countries agreed that ODF is an important and in itself a remarkable achievement but that it is only the first stepping stone to something bigger and more important: universal access to sustainable sanitation. To achieve this there is a need to focus on sustained behaviour change and improved sanitation and that it should include safe management of faecal waste to ensure environmentally safe sanitation along the entire sanitation service chain. 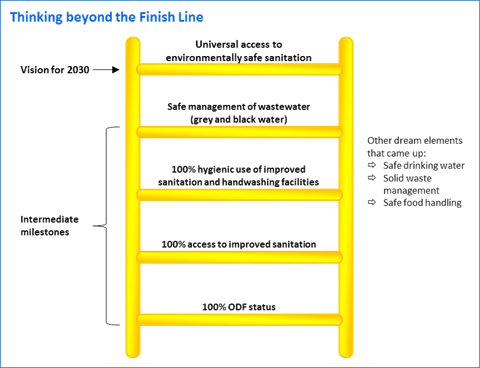