Payment by Results: An end or a means to an end?

In recent years, donors have been making greater use of Payment by Results (PbR) approaches to fund development programmes.

Under the Payment by Results (PbR) approach the recipients need to show results before they are paid. Proponents of PbR argue that the approach helps to share risks, drive accountability and value for money, as recipients - be it national governments, investors, NGOs or service providers - become more incentivised to deliver.

However, various development experts including Duncan Green and Robert Chambers have questioned whether donors should be pursuing PbR approaches at all. Their main arguments are that PbR has a risk of creating pervasive incentives because most of the resources might be focused on achieving one or few indicators to the detriment of other development objectives. While these arguments hold to some extent, they largely apply to payments to specific service providers, NGOs, households and communities. Very little experience exists on the use of PbR with partner governments.

Below I provide a brief account of the experience of using PbR with the Tanzania government in the water sector and propose some tips to consider making it work in different contexts.

Define the problem including who gets paid for what and how

As with many other countries in Sub-Saharan Africa, it is estimated that about one-third of water points in Tanzania are not functioning. Among the water points that fail, about 20 percent fail in the very first year, and the failure rate increases steadily up to 30 percent by 10 years of operation. Several factors could influence the functionality of water points. Some of them include: choice of technology and water abstraction methods, the hydrological factors (such as ground water depth, groundwater productivity and geographical location); governance and management factors (such as existence of water user fee and revenue management arrangement). Beyond the immediate context of observable characteristics that influence the functionality of water points, there are also broader institutional arrangements and political dynamics associated with identification, design, construction and maintenance of water infrastructure.

To tackle this problem, in 2013, we introduced an additional incentive payment to Local Government Authorities (LGA) for each water point to be kept functional. Payments are made annually based on verified results, and money is disbursed to the local government authorised through the Government of Tanzania’s treasury. When they receive the money LGAs have a discretion on how they would want to spend the money so long as they reinvest it in the water and sanitation sector and keep on improving their performance.

The idea of tying payments to functioning water points is to motivate LGAs to put in place systems and implement effective measures to improve identification, appraisal, designs and construction of water infrastructure, alongside putting an increased focus on repair and maintenance of water points. This would improve water point functionality and guarantee sustainability of water services in rural areas. 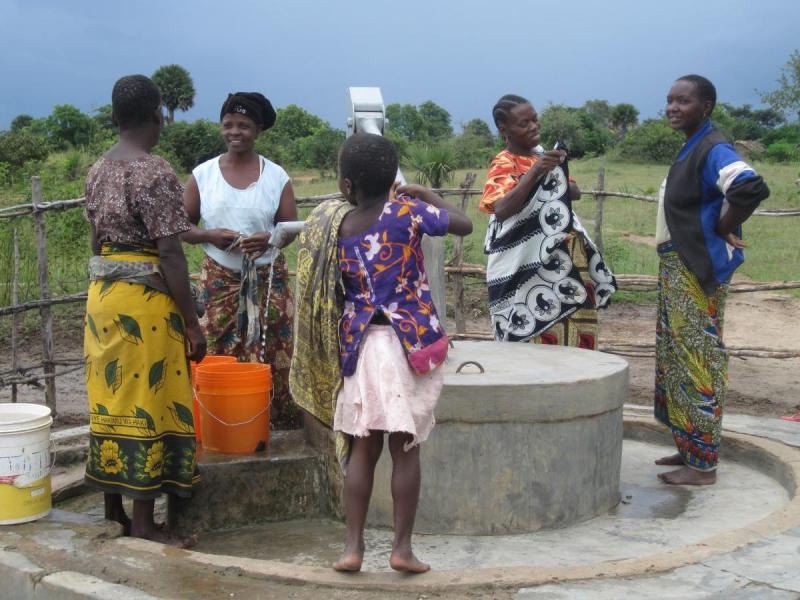 The influence of PbR is realised through multiple channels

The primary objective of the PbR is therefore to improve water point functionality. Nevertheless, emerging evidence shows that this is not a straightforward thing  to achieve particularly when working with partner governments where: monitoring and reporting systems are weak; existing systems and capacity to support operation and maintenance are insufficient; and implementing agencies (LGAs in this case) consistently face enormous structural challenges which limit their flexibility to receive and spend the money effectively.

Yet, our experience shows that even within these constraints, PbR (depending on how it is designed and implemented with partner government) can help to drive systemic change in tackling complex development challenges. In our case for example, when data verification was done in the first year of PbR, we found that the quality of data reported by LGAs was insufficient and far less reliable to use for PbR. A decision was then made to delay the programme for two years and use that time to support the government to improve levels of reporting and quality of data. During this period, the donor stopped the disbursements as results were much lower than envisioned before.

Nonetheless, the gap of implementation helped us leverage political support from the senior level of government (albeit with limited levels of financial disbursements) to design and institutionalise an efficient system for management of water point data, alongside shifting the focus to results and accountability at LGA level.

The ‘double dipping’ benefits of PbR

The PbR cycle has now completed three phases of implementation with three more phases to come. However, our experience shows that whilst the financial incentive isn’t yet leading to demonstrable influence on the desired outcome (of improving water point functionality), PbR can help both the donor and government to look beyond quick fixes and ad hoc approaches.

In our case, it has helped to strengthen government systems, and at the same time influence spending of government’s own money on results that matter. For example, in the past year, the government started to use the data monitoring and reporting systems created through the programme in determining allocations of the National Water Funds to the LGAs and the government is encouraging LGAs to spend the funds on the activities which are directly linked to improving water point sustainability.

PbR is a new approach and implementing it with national governments isn’t  easy, as in many cases existing systems are not robust enough to support its implementation. It may take time to take off and some activities (for example those related to verification and payments) might not fit well with the typical project cycle. This doesn’t mean you should write off the idea of introducing payment by results altogether — but you do need to take some precautions to make it work for your context. You can use these tips:

Nonetheless, adaptive programming has drawbacks: it can be staff time intensive, can complicate accountability relationships, and labelling work as “adaptive” can be a cover for poorly conceptualised or weakly managed programming. We took the viewpoint that “tried and tested” programming should deliver targets and other deliverables, with adaptive programmes being used to address higher risk, worse understood or more intractable issues. This balancing of risks may create a base level of effectiveness and public accountability within donor and government portfolios, while giving the opportunity to make inroads on long-term development issues.

This implementation of PbR in the Tanzania water sector requires a portfolio balancing approach across its activities. PbR is only a small part of the total budget in the sector. The majority of funds including the government’s own funding is primarily used for extension, major rehabilitation or building of new water infrastructure. Work on new infrastructure is non-adaptive: it uses existing government systems and well-understood technologies to deliver new water points. The non-adaptive portion of the programme helps to deliver most of the results which the programme is responsible for. This has freed up the adaptive PbR component to take some risks, by testing multiple approaches to unlocking underlying political economy and capacity issues, without placing the government and donor commitments at risk.

In our case, we found that for the incentive to result in improved maintenance of water points at local level, there is a need for a strong linkage and collaboration between LGAs and communities, since communities are at the frontline of maintenance activities. As a result, on top of PbR, a decision has been made to implement and test a series of interventions that would help bridge the gap between LGAs and communities and push for more collaborative behaviours on repair and maintenance. The impact of these interventions is being evaluated to provide actionable findings on how to improve sustainability of rural water supply services in Tanzania.

Finally, if you want to use PbR with a partner government realise that at the start, the baseline data you will get may not represent the reality on the ground. But don’t be afraid to start with what’s available. Evidence shows that the use of PbR in the water sector  has helped improve monthly reporting as well as getting a complete and correct inventory of over 130,000 water points recorded in the national inventory.

Disclaimer: Lukas Kwezi currently works for the UK Department for International Development (DFID) as Water and Sanitation Adviser, based in Dar es Salaam. He writes blog posts in his spare time. Though he may talk about the work he does in the sector, this is neither a corporate nor a political blog and the opinions and ideas expressed here are solely his own, not those of his employers