A fair share of profits from globally shared resources needs to be harnessed to finance the Loss and Damage fund announced at COP27. 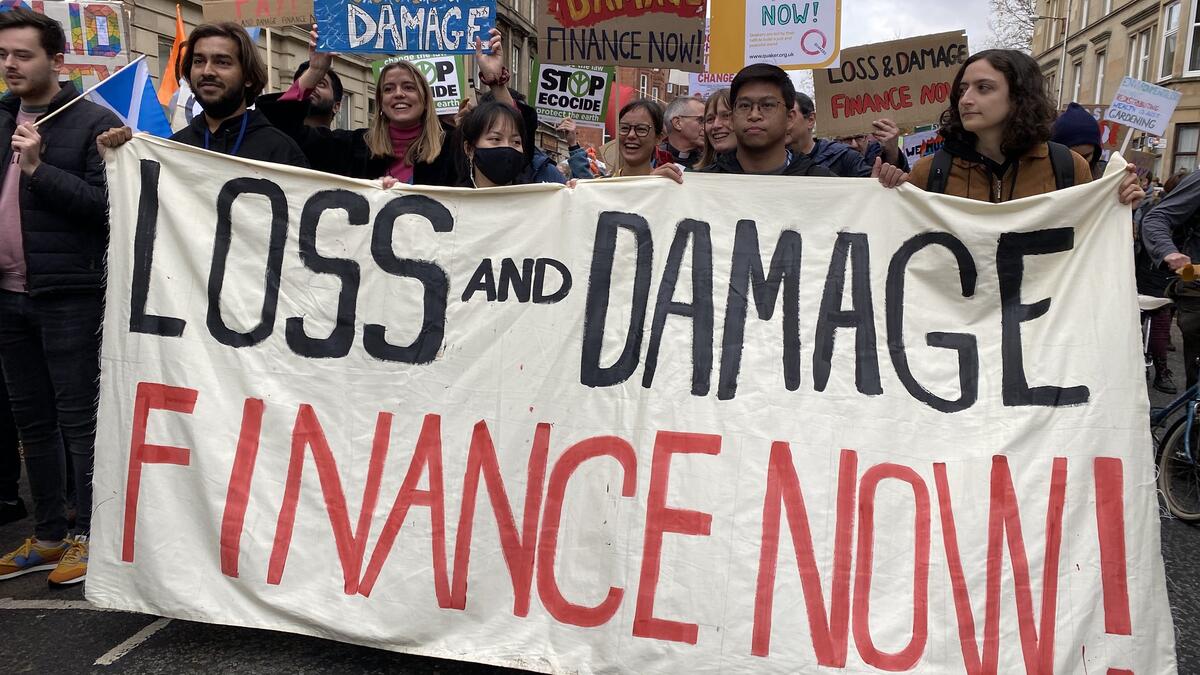 Though creating a specific fund for loss and damage is quite significant, the devil is in the details. The size, structure, composition, financing, and compensation mechanisms are to be fleshed out. The critical challenge is to determine the size of the fund and the financing mechanism. Without reaching any concrete agreement on financing and modalities of replenishing the L&D fund, the promise will end-up as wishful thinking. To operationalise the fund, COP27 has agreed to establish a ‘transitional committee’ to recommend the new funding arrangements, which will be presented at COP28.

So far, the public aid and funding from developed countries responsible for most of the CO2 emissions have not progressed in any significant way. COP27 estimates suggest a commitment to limit global temperature rise to 1.5º C translates into US$ 4-6 billion per annum for a global transformation to a low carbon economy. Considering the resistance and the post-pandemic recession, funding from developed countries alone would not be enough to bridge the gap.

In this context, the following innovative financing options, inter alia, should be appropriately designed and adopted to shape the L&D corpus. The globally shared resources like the high seas, outer space, the Arctic and Antarctic etc., are the common heritage of mankind that are to be utilized for common benefits and not exclusively for private profit. A fair share of such profits by nations/corporates needs to be harnessed to fund L&D.

Ocean shipping is an integral part of the supply chain for most industries, making it a backbone of global trade. It is estimated that, around 80 percent of the goods, are transported by ships. Between 1990 and 2020, the volume of cargo transported has more than doubled, to touch 10.7 billion tonnes. There has been corresponding growth in the capacity of the global merchant fleet as well. Between 2013 and 2020, the capacity of the world merchant fleet increased by 37 percent, reaching two million deadweight tonnes. Appropriate taxing or levying user fees for cargo movement in the international seas could be a significant funding stream.

Secondly, around 1.83 billion metric tonnes of crude oil were transported by sea globally in 2021. So also was the global trade in coal. The global export of coal totalled US$ 122.9 billion in 2021. Crude oil and coal being the major culprits of global warming and carbon emissions, any agreement on a global cess on crude movement, its production and super profits and windfalls from pandemic, war and miseries could be legitimately taxed.

Thirdly, the global space economy, at around US$ 469.3 billion in 2021, includes a range of activities like research, exploration, and utilization of space. Leaving the research, the exploration of space for commercial purposes could be taxed. In 2018, communications, related primarily to consumer television, comprised 26 percent of the total space economy. By 2040, this share is projected to grow to over 50 percent as the use of satellite and other space-based technology for internet infrastructure come into use. A tax, fee, cess or any levy on commercial space products and services, appropriately designed to collect funding for L&D to help poor nations could be a priority consideration.

Fourthly, as stated elsewhere, developed countries in the post-industrial revolution era have contributed significantly to global warming in terms of cumulative per capita emissions, and as a result achieved affluence and prosperity.

The inequity is so visible that a handful of countries are responsible for most emissions. Of course, absolute emissions don’t tell the full story. The real criterion should be the per capita cumulative emissions. For instance, even though China is the highest emitter of CO2, the average American is producing 14.4 tonnes of CO2 per person, as against 7.1 tonnes for a Chinese citizen. So also the fact that, developed countries in recent times were progressively outsourcing carbon intensive goods from developing countries like China and India by shifting their production base. 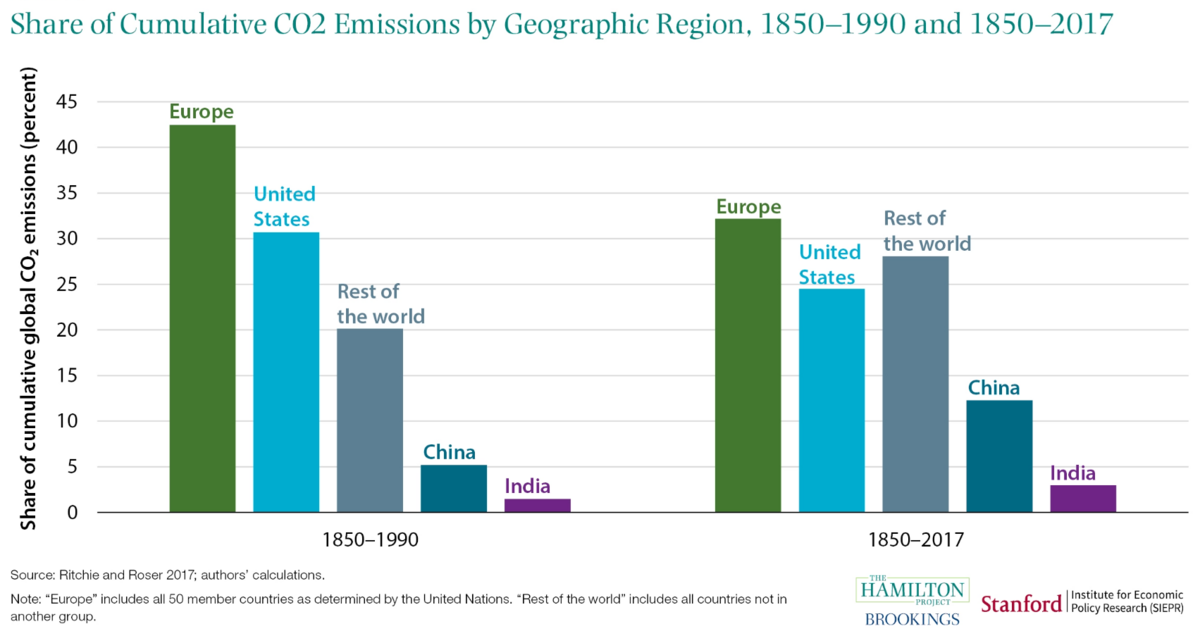 The emitters who have been benefitted economically, are morally and legitimately bound to compensate on a pro rata basis. Any feasible form of carbon tax proportionate to the cumulative per capita emissions needs to be adopted to augment the L&D kitty.

Fifthly, the Corporates have gained significantly from emissions over the years. Chief Executives for Corporate Purpose (CECP), a coalition of more than 200 of the world’s largest companies, released its annual survey of corporate philanthropy and employee engagement in 2018 (Giving in Numbers). About 250 multi-billion-dollar companies with aggregate revenues of more than US$ 7.9 trillion participated in the survey. Total giving by these 250 companies account for a paltry US$ 25.7 billion. Let the Corporates disclose their CO2 exposure and contribute to the L&D corpus voluntarily if not normatively based on a CO2 monitoring mechanism.

Sixthly, the resource potential of the oceans (blue economy) and Antarctica is receiving increased global attention because of technological developments, scientific research, and the drive to develop additional sources of energy and mineral supply. Scientists postulate that high grade mineral deposits exist there, like base and precious metals. Though commercial feasibility is yet to be proved, these common pool resources of  mankind should be managed for the global benefits and a potential trust for financing climate adaptation, and loss and damages of highly vulnerable poor countries.

Multilateral climate finance, green bonds, and national efforts in making market instruments work for climate adaptation are other potential options to make the L&D work for the vulnerable poor nations. There are accordingly many blueprints for financing SDGs and climate action. The magnitude of the funding gap requires multiple options, which include compensatory financing by developed countries proportionate to their cumulative carbon emissions. However, global commons could be a potential lead financing window, which has been hitherto untapped. Some of the levies may cascade to an increase in product prices, however, it could be a lesser evil than a climate disaster. Ingenuity will be needed to ensure that the financing is normative, monitorable, less cumbersome, and simple.

Can we afford to divert resources for loss and damage, away from reversing warming? Whether it is prudent to invest all resources that are available singularly on extracting gigatonnes of carbon from the atmosphere and to use it as a feedstock in a circular economy? Leaving those critical questions aside, the need for an L&D fund in the medium term is undisputed.

Dr Kurian Baby is a former IRC India Country Director. He is a retired IAS officer and a well-known Water and Climate expert.

Acknowledgements: This blog was reviewed by Cor Dietvorst and copy-edited by Tettje van Daalen, IRC.

Pay the price: what does Loss and Damage mean for WASH?