The long road to data savviness. 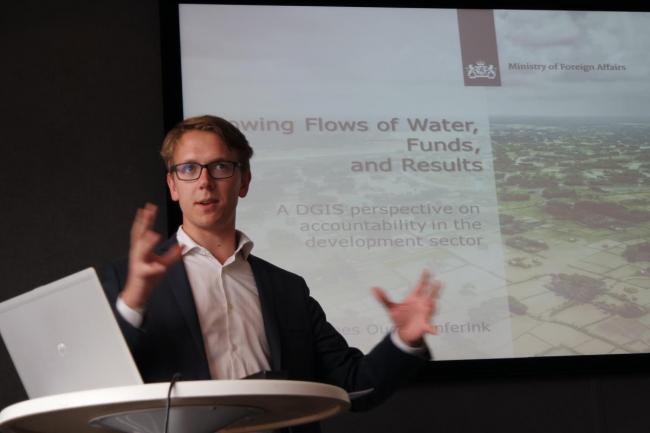 On July 6th , IRC hosted a discussion on "Accountability tools to improve WASH service delivery" in The Hague as part of its IRC Event series. The Dutch Minister of Development Cooperation, Liliane Ploumen, emphasises the role of civil society in holding government to account for the delivery of basic services, including water and sanitation. But demanding and providing accountability is not straightforward; it requires tools to get insight into flows of money and flows of water, and processes of dialogue and dissent between government and civil society. Various strategic partnerships between the Dutch Ministry of Foreign Affairs and NGOs working in the water sector (including Watershed - empowering citizens) presented ways to ensure accountability at different levels: from communities using social audits to international development agencies embracing open data systems to improve transparency.

Accountability is a key concept of Watershed. The aim of this 5-year strategic partnership is to improve WASH governance and be responsive to the interest of marginalised groups by strengthening local civil society organisations (CSOs).

Not only governments but also CSOs need to be held accountable. Accountability is one of the five principles that CSOs should adhere to when influencing policy. The others are credibility, legitimacy, being service-oriented and having a power base. Together with accountability, these are known as the CLASP principles described in "Advocacy and policy influencing for social change".

To be effective, policy influencing should take place at different institutional levels: local, national and international. Roel Blesgraaf and the two other presenters, Jessie Bokhoven (SNV) and Kees Oude Lenferink (Directorate-General for International Cooperation - DGIS) gave examples of accountability tools and approaches that are being used at these three different levels.

A Simavi budget tracking project in six districts in Bangladesh resulted in a 12-18% increase in the WASH budget after two years. This success inspired replication in surrounding villages. Now local communities can do budget tracking without external support. The success is attributed to the strategy used, starting with district-level awareness raising and open budget meetings, after which an Akvo FLOW-based budgeting tool was developed to collect data. Replication was promoted through advocacy meetings with local and national government, and the media.

SNV’s Jessie Bokhoven shared lessons learned from projects in Nepal and Tanzania on the use of social accountability approaches to improve the functionality of rural water supply.  In Nepal, SNV developed a Social Accountability (SA) toolkit, which included the Community Score Card, social audit and public hearing tools. SNV applied these tools during the whole ‘life cycle’ of schemes, including post construction.  The project stressed the rights and responsibilities of both duty bearers (local government, CSOs and operators) and right holders (users). Important too was the creation of an “institutional home” for post-construction support unit, upscaling & follow-up.

In Tanzania, SNV used a bottom-up approach by strengthening local-level capacities and investing in formal and informal relationships to influence national-level processes. This requires a lot of patience as it took eight (!) years before results were visible. Evidence-based advocacy and flexible donors were key ingredients.

Most examples of accountability tools are those used in project contexts. "The challenge is to institutionalise them at national level", remarked IRC CEO Patrick Moriarty.

Roel Blesgraaf gave one example of national-level accountability: the Simavi-led Netherlands country programme of Watershed. This programme has a specific mandate for CSOs to hold the Dutch Ministry of Foreign Affairs (MFA) to account for its aid commitments to WASH in terms of its budget and focus on the poor and sustainability. Watershed partners Simavi and IRC are already active as “watchdogs” by publishing blogs and position papers, and encouraging questions from Members of Parliament (MPs).

Sanitation and Water for All (SWA) is a global partnership of governments and development partners working together to make WASH a political priority and to improve accountability and aid effectiveness.  By publishing their WASH commitments online, SWA partners promote mutual accountability. To make sure local voices, SWA will now include community-based organisations (CBOs) as a separate constituency.

The International Aid Transparency Initiative (IATI) is a global accountability mechanism for aid spending. As of January 2016, the Directorate-General for International Cooperation (DGIS) of the Dutch Ministry of Foreign Affairs requires all its aid recipients to comply with IATI reporting standards. Kees Oude Lenferink (DGIS) informed the IRC event participants that a results report on its WASH spending for 2015 based on IATI data would soon be published.

"Data alone is not a silver bullet", said Kees Oude Lenferink. “All the dashboards in the world won’t change countries”, added Patrick Moriarty. Context and narratives, supported by data visualisation, are needed for sensemaking.  Partners and stakeholders need to become “data savvy”.

Being “data savvy” means not taking data at face value. On the basis of which numbers do you draw conclusions? A participant gave the example of the Netherlands funded Ghana WASH programme. A large part of the grant goes to taxes (30%) and technical assistance; much less to local organisations.

Accountability has a price

Accountability has a price, but the cost of poor accountability may be even higher. At a previous IRC event, the Water Integrity Network (WIN) estimated that the global water sector loses US$ 75 billion every year through corruption.

On the other hand, some accountability measures such as asking the right questions and being honest with each other don’t cost anything, according to Jessie Bokhoven.

Roel Blesgraaf countered that the price of championing accountability sometimes can be very high. In 2015, Global Witness reported that fifteen water activists were assassinated.

For a large part, accountability relies on the long process of changing behaviour and developing norms. These can be enforced from outside as illustrated above by DGIS that has made IATI compliance conditional for new loans. If more organisations join IATI it will become the new norm for accountability, reckoned Kees Oude Lenferink. Jessie Bokhoven added that supporting behaviour change is an important role for development agencies.

For some of the 40 or so participants attending the the IRC event, it was their first in-depth encounter with the field of accountability. That was also the case for event moderator, Akvo’s Mark Tiele Westra, who admitted in his concluding remark: “I am still confused about accountability but at a much higher level”.

The event presentations are available below under Resources.