From eThekwini to Ngor: where does sector change begin?

RT @SECTION27news: Ahead of the court hearing in the Limpopo High Court on Friday 6 August, we asked @mediahackza to look at data provided…

Mark Radin and Alana Potter reflect on the steps to achieving sanitation commitments.

The vision articulated by African Ministers responsible for Sanitation and Hygiene at AfricaSan 4 in Dakar Senegal, is crystal clear:

Achieve universal access to adequate and sustainable sanitation and hygiene services and eliminate open defecation by 2030.

The ten commitments towards this vision are also very clear. Achieving these commitments presents an essential yet somewhat daunting challenge to African governments.

You’ll notice the commitments are numbered, perhaps in order of priority.

Based on a careful analysis of progress against the eThekwini commitments, we can suggest a sequential pathway to the incremental achievement of the Ngor commitments.

Lessons from the progression in achieving targets over time can not only help the African Minster’s Council (AMCOW) to develop more nuanced indicators for performance monitoring and accountability, but also provide guidance and insight to governments for where to begin.

The eThekwini Declaration and commitments on sanitation, announced at the 2008 AfricaSan meeting, provided guidance for countries in Africa to meet the Millennium Development Goal on sanitation. Ministers from countries across the continent agreed to eleven commitments that aimed to expand access to sanitation services. In order to monitor the commitments, the African Ministers’ Council on Water (AMCOW) created and monitored a set of self-scoring indicators to track the implementation of and progress on the commitments within countries.

At the 2011 AfricaSan meeting in Kigali, a progress report on the commitments showed how thirty-seven countries scored on a scale of 0 (insufficient progress), 1 (some progress), to 2 (good progress).  Below is a summary of the general findings from the 2011 progress report.

At the Kigali AfricaSan meeting, ministers both re-endorsed the eThekwini Declaration and commitments and called upon AMCOW to develop a new set of indicators that were better aligned with the commitments and better capture implementation. A new set of indicators were approved and later used for the progress reports released in 2013 and 2015. However, the spirit of the indicators remained the same, which allows for an overall analysis to draw general lessons and observations from the AfricaSan Process.

What were the lessons?

A careful analysis of the indicators across time [1] revealed an interesting set of lessons. By separating indicators by scores in the base year of 2011 and performing a simple t-test, it became clear that scores on certain indicators were associated with better performance in future years. These findings support a hypothesis to effectively build an enabling environment for sanitation (and possibly for other sectors) may require a number of steps that occur in a sequential order.

Between 2011 and 2013, sector leadership and coordination drove progress.

Countries that scored ‘good progress’ in 2011 had a statistically significant difference in the overall eThekwini scores across all indicators in 2013 than those that scored ‘some progress’ on these indicators in 2011. This finding was unique for these two indicators and may suggest that policy and coordination are starting points for approaching other sector change.

By 2015, almost every country reporting progress on the eThekwini commitments had achieved good progress on the coordination indicator (28 out of 30 countries). Sanitation leadership in 2011 is associated with better performance on two policy related indicators:

This relationship is further supported by the changes from 2013 to 2015. The streamlined set of indicators, created after the 2011 baseline, show that policy and M&E scores are related to future overall improved scores.

Good progress on the policy indicators “to establish, review, update and adopt national sanitation and hygiene policies” and “ take the necessary steps to ensure national sanitation programs are on track to meet these goals” in 2013 are individually related to statistically significant higher overall scores in 2015.

Good progress on the M&E indicators “to develop and implement sanitation information, monitoring systems and tools to track progress at local and national levels” and “work with global and regional bodies to produce a regular report on Africa's sanitation status” in 2013 are also individually related to statistically significant higher overall scores in 2015.

Based upon these findings it appears that a general path to improving sanitation performance and creating an enabling environment starts with leadership and coordination. Once these are in place, countries have the core building blocks to meet the other commitments. 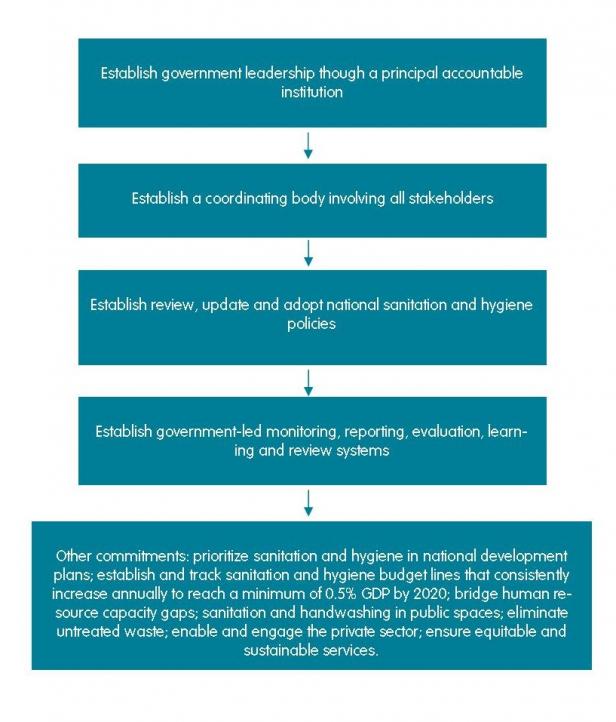 These lessons clearly indicate the entry points to achieve universal access to adequate and sustainable sanitation and hygiene services and eliminate open defecation by 2030: establish a lead institution, clarify roles and responsibilities and ensure coordination. From there, sanitation and hygiene policies can be developed, M&E systems can be developed and other – equally important - commitments can be met.

In short, put Ngor 4 at the top of your list:

Ensure strong leadership and coordination at all levels to build and sustain governance for sanitation and hygiene across sectors especially water, health, nutrition, education, gender and the environment.

This presentation talks about the AfricaSan movement and how it has influenced change in sanitation and hygeine in Africa.