Access to water and well-being of pastoralists in Afar

Water is central to the lives of pastoralists in Mille woreda, and water development projects have huge impacts. How these play out for the local community is a complex story. 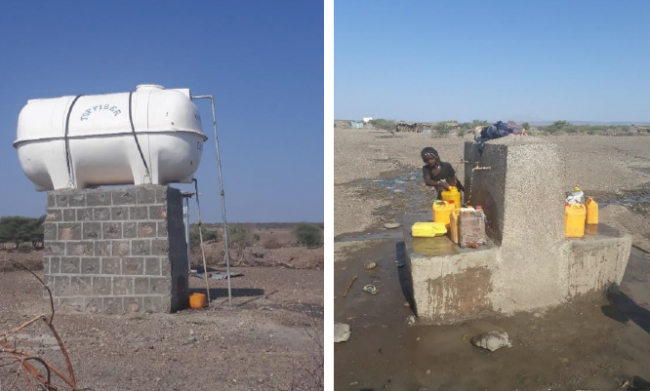 Mille woreda is located in the Afar Region, 550 km along the main Addis Ababa-Djibouti highway and about 50 km south of Semera, the region's administrative centre. An estimated 118,000 people live in Mille and three quarters adopt a partly nomadic way of life. The woreda (district) as well as the region is relatively underdeveloped and the same holds true for the WASH infrastructure. There are deep and shallow wells in the woreda, but relatively few. The total of 31 improved water supply schemes result in an official water supply coverage figure of 34%, but service levels with respect to quantity, quality and distance are known to be low.

For pastoralists in Mille, ownership of livestock and access to pasture and water sources are the most important determinants of well-being. In Wayta Leta village in Gega and Burtele Kebele (ward), I met Ato Abubaker Adal, married and a father of three. He told me that water has been their critical problem in the past, but now thanks to the motorised pump in their village, the problem has been solved effectively. 'There is school, health post and water point in our village, so we reside here year round, we have settled here; only youngsters that keep camels and cattle travel from place to place in search of pastures' said Abubaker.

The scheme has been functional for the past two years according to Ato Ahmed Me'I, who is the guard of the pump and generator house. He switches on the generator in the morning and in the afternoon for at least an hour and a half. There is a WASH committee (WASHCO) of seven people including Ahmed that oversees maintenance and operation of the water scheme. Committee members serve voluntarily. The committee collects a water fee of 50 ETB (US$ 1.82) per month from each household. However, they might charge a lower fee, of up to 20 ETB (US$ 0.73) per month for poorer households or even exclude the destitute from paying, according to Ahmed. The cash is used mainly for purchase of fuel for the generator. Whenever the committee runs out of cash, the chairman mobilises the community to raise additional funds.

"Though, we use the water for drinking, cooking and watering of goats, we still need to send our cattle and camels elsewhere in search of pastures," said Abubaker. Thus, despite having access to water at walking distance, his need is not complete. He argues that the motorised water solved their water need for domestic consumption and watering kid goats and calves but not the need for pasture. Only rain assures good pasture, and good pasture means a lot of milk for consumption and a good reproductive season for their livestock. "Rain is vital and my happiness is complete when it rains", says Abubaker.

In another village called 'Amestegna' in Digle and Giraro kebele, where Ato Sulu'u Muhamed lives, there are no functional improved water supply schemes. Ato Sulu'u, a widower and a father of five, told me there are two non-functional boreholes in their village. He says that the first one has been non-functional for long and no one recalls the time, and the second one became non-functional about four or five years ago. The pump was discharging foul-smelling and salty water even before it became fully non-functional, so nobody bothered to report the non-functionality. Households in the village rely on ponds, rivers and scoop holes for human and livestock consumption. Women in the village carry jerry cans on their backs and travel in search of water early in the morning and late in the afternoon, a common practice in Afar. Collecting water for household use and for watering calves and kid goats is the duty of women.

The Awash and Adaytu rivers cross Digle and Giraro kebele, and the area hosts cattle that come in search of water and pasture during the dry season. According to Ato Sulu'u, the village is one of the destinations for pastoralists in the dry season and residents of the village even used to practice farming along the Awash riverbed. However, Sulu'u further explained how the areas that used to be residential and used for grazing are flooded in the wet season after the construction of the dam. He said, "The area under water has been increasing from time to time forcing us to abandon farming. Areas that used to be our homestead are under water, which makes it impossible for us to reside in the nearby areas due to mosquitoes that make us vulnerable for malaria." Following the construction of the dam, he says that pasture availability has reduced and expansion of the invasive tree, Prosophis aggravates the problem. Sulu'u acknowledges presence of flooding even before the construction of the dam, but argues the effect was not as devastating.

These cases show that impacts of development are not always going to be in line with the expectations of the local community. The dam has created stress and changes in pasture availability as well as the potential to expand sugar. The water scheme on the other hand has been very important in addressing the immediate water demand of the community, but still while respondents here might tick the box of the national or the WHO/UNICEF JMP standards for the distance and daily per capita water consumption, it does not prevent them from feeling insecure or travelling in search of water for their cattle. They are still only satisfied when they look at the sky and it rains.

The WEEP project is examining the potential for a new generation of indicators that might better reflect the comfort and relief or the stress and fears of the local community in relation to water projects. Perhaps if we can do this, it will be possible to be more sensitive to their needs and design better projects that improve the well being of Afar pastoralists.

Report of the Scoping Visits in Dulessa and Mille Woredas, Afar Region
Authors: Koppen, B, Kebede, A, Hutchings, P, Parker, A, Terefe, B
Published: 11/2017
Pages: 24