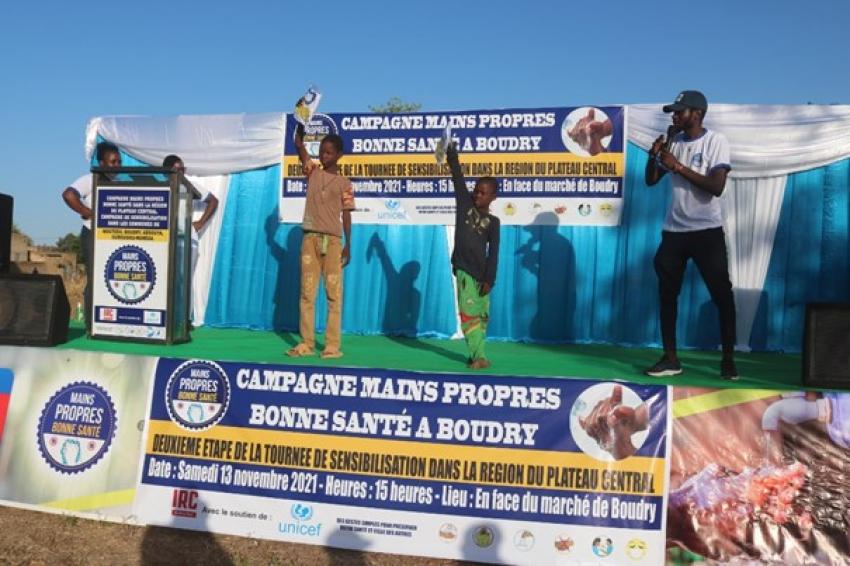 The children of Boudry took part in the campaign (Ph. Production Universal)

Goodwill Ambassador Salif Sanfo has been delegated by IRC, with the support of UNICEF, to continue the Clean Hands, Good Health campaign through four communes of the Central Plateau region: Boudry, Mogtédo, Absouya and Ourougou-Manéga. This campaign aims to sensitise the populations of these communes on handwashing and curb the transmission of infections. On Saturday August 14, 2021, the activities of this second phase of the campaign started in the commune Mogtédo and then moved on to the commune of Boudry on Saturday, November 13, 2021. Many people from Boudry came to the start of the campaign (Ph. Production Universal)

The ceremony attracted nearly a hundred people to the several activities organised. There were sound animations and games, warm-up Aerobic Zumba, a popular cross, stretching, a refreshment followed by handwashing sessions, and artistic performances from the traditional Warba troupe of Boudry and Saad Telecom. Awareness messages specially prepared for the occasion on hand hygiene were broadcast on Radio Bassy and the national radio of Burkina Faso to encourage behaviour change and raise awareness. The ceremony was attended by the traditional chiefs, representatives of religious communities and the representative of the mayor of the commune of Boudry. On this occasion, the mayor received an honorary award for his dedication and commitment to making the Clean Hands, Good Health campaign a great success. The population of Boudry welcomed this campaign and the team in charge of Clean Hands, Good Health was relieved to know that from now on the commune and its surroundings are aware of the importance of washing their hands and the diseases associated with dirty hands.