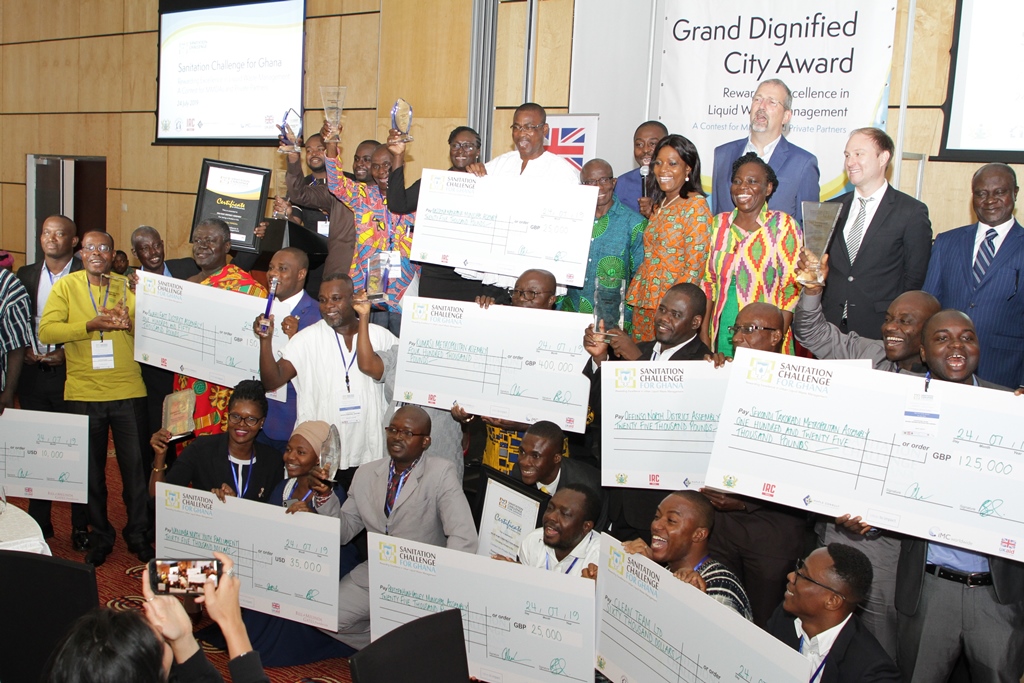 Sanitation Challenge for Ghana competition winners at the final award ceremony on 24 July 2019 in Accra, Ghana.

The winners of the Dignified City Award, the last stage of the UK Aid-funded Sanitation Challenge for Ghana Prize, were announced Wednesday 24 July 2019 at the Marriott Hotel in Accra, Ghana. The celebratory event took place under the distinguished patronage of the Minister for Sanitation and Water Resources and was supported by the office of the president of the Republic of Ghana.

Nine Metropolitan Municipal and District Assemblies (MMDAs) and six private partners were awarded a total prize purse of £1,285,000 and US$ 225,000 respectively for their implementation of urban liquid waste management strategies. Winners were also selected on the basis of how they managed to use inclusive partnerships to influence innovations, expertise and investments in their target localities. The private sector and non-state actor component of the award was introduced at a later stage by the Gates Foundation.

According to the Honorable Cecilia Abena Dapaah, Ghana's Minister for Sanitation and Water Resources and event host, the Sanitation Challenge for Ghana was a success. The initiative was launched in 2015 "to motivate and trigger competition among the Metropolitan, Municipal and District Assemblies to develop innovative sanitation initiatives." Four years later, the outcomes of the challenge have been favourably received, with the Minister affirming that "the Ministry appreciates the passion with which the Assemblies responded."

Overall, it was clear to see that the presence of robust partnerships featured prominently among the winning Assemblies. Kumasi Metropolitan Assembly was awarded the first prize and £400,000 for the Metropolitan and Municipal Assembly category for demonstrating strong levels of collaboration with the private sector, harnessing local leadership commitment and for rehabilitating the local waste treatment pond to generate revenue through aquaculture. Nanumba North District Assembly won the first cash prize of £285,000 for the District Assembly Category for its bi-partisan commitment and outstanding private partnership. Finally, the winner of the Private Partner Prize of US$ 100,000 was TriMark Aquaculture Centre for it's innovative partnership with fellow awardee, Kumasi Metropolitan Assembly.

It was a festive and jubilant closure to a unique competition, but Theodora Adomako Adjel, Head of Extension Services of the Community Water and Sanitation Agency (CWSA) and event facilitator emphasised that as with any journey, the "Sanitation Challenge for Ghana must have a destination." She reminded the awardees that their newly received distinctions are just the beginning, and "in two years time, we should be able to talk about some of the destinations already reached".

See below the full list of winners. For a summary overview of all fifteen Metropolitan and Municipal and District Assembly strategies, download the flyers in the section below. 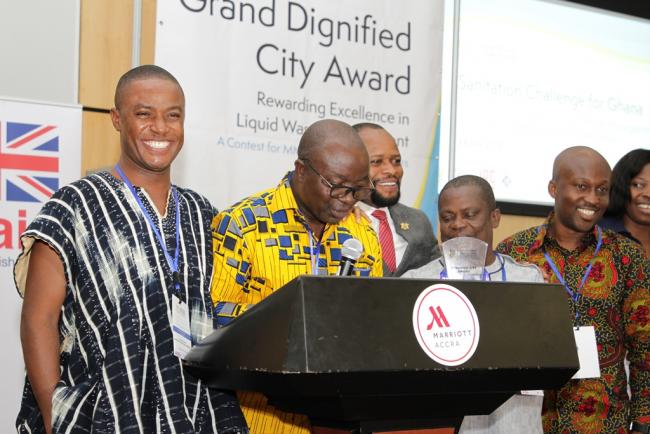 "Winning has been very humbling, but it challenges us to sustain the efforts invested so far. Through the challenge, we've come to the realisation that achieving SDG 6 calls for strong collaboration between the MMDAs, private partners and the traditional and religious leaders in our communities. To bring the change we want to see in sanitation, strong political leadership is required"  -  Osei Assibey Antwi, the Metropolitan Chief Executive of Kumasi Metropolitan Assembly, 1st prize winner, Metropolitan and Municipal Assembly Category. 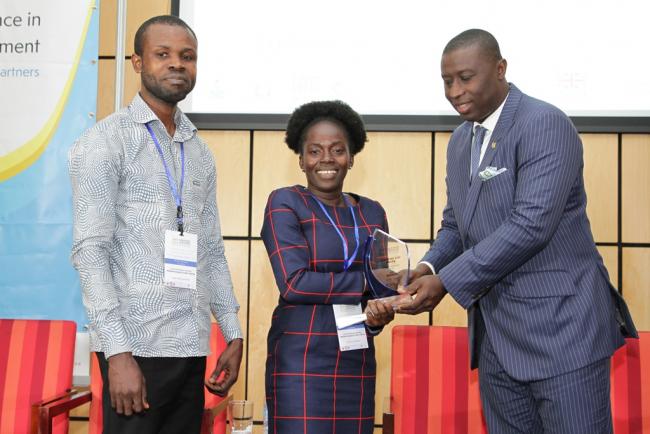 "Since rolling out our business model in 2010, we had confidence in our idea. We believed we had really prepared ourselves for this prize. Even without knowing about the prize, our passion for implementing the innovation was enough and we were poised to achieve our goals. We appreciate the recognition of our effort and hope to use the prize funds to invest in scaling up to another potential wastewater treatment plant " - Mark Yeboah-Agyepong, the founder and centre director of TriMark Aquaculture Centre – 1st prize winner, Private Partner Prize.

Kumasi Metropolitan Assembly - 1st winner, £400,000. For its innovative partnership with the private sector, use of aquaculture, skilled and knowledgeable staff and strong support and leadership commitment from the Mayor.

Effutu Municipal Assembly – 2nd winner, £225,000. For its innovative partnership with the private sector and the Government of Ghana’s institutions, including the local prison service who are using biogas. The Assembly stood out for its highly committed management team. 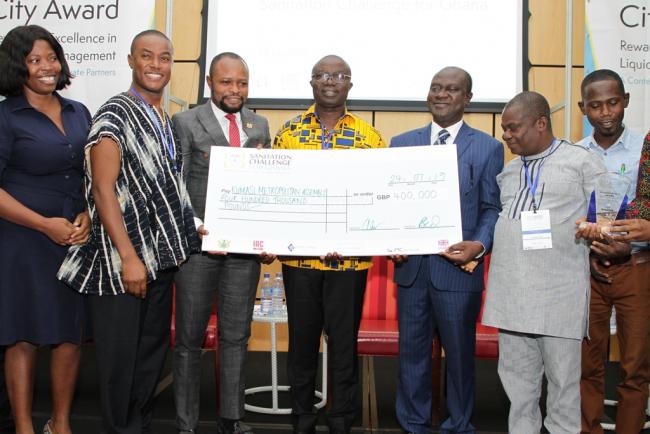 Nanumba North District Assembly – 1st winner, £285,000. For its bi-partisan leadership from both past and present chief executive and innovative private partnership, especially for sanitation for peace.

Kwahu East District Assembly – 2nd winner, £150,000. For its innovative commitment to the sanitation value chain. The Assembly demonstrated a strong leadership commitment from the chief and presiding member. 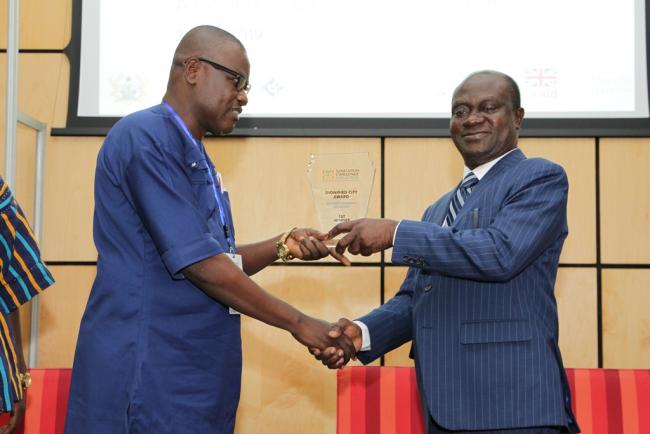 Each of the following Assemblies received recognition plaques and certificates of appreciation:

Nanumba North Youth Parliament – 3rd winner, US$ 35,000. For its outstanding community engagement with the Nanumba North Assembly and wider community.

Training, Research and Networking for Development (TREND) - Special Prize, US$ 10,000. For its innovative capacity building and data collection with Kumasi Metropolitan Assembly.

Each of the following private partners received recognition plaques and certificates of appreciation:

The Sanitation Challenge for Ghana

The Sanitation Challenge for Ghana (SC4Gh) is part of 'Ideas to Impact' programme which took place from November, 2015 to July, 2019 under the auspices of the Ministry of Sanitation and Water Resources with funding from the UK Department for International Development. IRC Ghana was the national implementing agent acting on behalf of IMC Worldwide with technical support from MAPLE Consult (Ghana). The objective of SC4Gh was to stimulate competition among Metropolitan, Municipal and District Assemblies (MMDAs) and to encourage inclusive partnerships for the design and implementation of liquid waste management (LWM) strategies. It aimed at bringing transformational changes to city-wide sanitation (LWM) service delivery.

The SC4Gh Prize for MMDAs was in two stages - the design of MMDA liquid waste management strategies constituted the first stage (Duapa Award) and the second stage (Dignified City Award), the implementation of the strategies. Following several support interventions, over 127 MMDAs responded positively to the call for action and registered their intentions to participate in the competition. At the end of stage 1 on 30 April 2016, 48 MMDAs successfully submitted their strategies for adjudication. Twenty one of the 48 MMDAs excelled and were duly recognized with honorary prizes with 3 winning a total of £75,000 in monetary awards. All 21 MMDA were invited to express interest to participate in the implementation of their winning strategies; and 17 of the 21 MMDAs met the minimum conditions and were considered for stage 2.  At the end of the stage 2 process on the 27th of March 2019, 15 of the 17 MMDAs successfully submitted their final implementation reports for end-line verification and judging.

The private partner component of the competition launched in July 2017 to boost commitment from the private sector and non-state actors in the implementation of the Sanitation Challenge for Ghana, or Stage 2. The Gates Foundation in collaboration with Community Water and Sanitation Agency (CWSA) secured US$ 225,000 to be awarded as specific thematic prizes for successful private partners who provide investments, innovative business solutions and expertise to the 17 contesting local governments in the SC4Gh to enable them to achieve the full cycle implementation of their liquid waste management strategies.

Winners of the Sanitation Challenge for Ghana