Winners of the Sanitation Challenge for Ghana

Three Metropolitan, Municipal and District Assemblies (MMDAs) have won a prize for their best sanitation strategies in the Sanitation Challenge for Ghana.

The winning districts that received monetary prizes at the Duapa Award Ceremony are:

Worldwide the Sanitation target is one of the targets most off-track and Ghana is one of the worst performing in the sub-region.  Ghana’s national sanitation coverage stands at 15%, while the average in the region is close to 30%. The main problem is that sanitation has been structurally underfunded and less prioritised, resulting for example in frequent cholera outbreaks, especially in urban settlements. To put sanitation back on the agenda and encourage local politicians to prioritize and invest more in sanitation, the Sanitation Challenge for Ghana was launched.

The three-and-a-half year Sanitation Challenge was announced by the Government of Ghana on World Toilet Day, 19th November 2015, as a component of the Ideas to Impact Programme. The Challenge aims to stimulate competition among MMDAs and to encourage inclusive partnership for the design and implementation of liquid waste management strategies. Following zonal workshops for all the 139 prequalified MMDAs, 127 MMDAs responded positively to the call for action and registered for the competition. At the close of submissions 48 MMDAs had submitted their strategies for the Duapa Award. At the end of the judging process on 21 June, 2016, the three MMDAs emerged as winners and together with 18 other MMDAs qualified for the next round of the competition, dubbed the ‘Dignified City Award’ stage.

The panel of judges was impressed with the quality of the submissions. After online judging rounds by over 50 local and international judges, six finalists presented face-to-face to a judging panel. The judges recommend that all MMDAs look at the excellent submissions from the top three awardees for their innovation strategies and strong political commitment.

“This award is welcome news for us as a district. Joining the competition is an indication of our resolve to strategically deal with the sanitation menace. In fact, some amount of work has already been done to get 42% of the communities open defecation free. This actually spurred us on to be part of the competition and we have the commitment to implement our liquid waste strategy. We appreciate how far the competition has gone and we will use this challenge to solve our sanitation problems” - Hon. Killian A. Kwame, DCE, Jasikan District Assembly. “The involvement of Atiwa District started when the District Health Department and others attended the zonal workshop in November 2015 when this competition was announced. There and then the Assembly accepted the challenge to compete. The process involved a lot of hard work and dedication. The whole process has been transparent and very fair. We are therefore committed to achieve the ultimate objective of improving liquid waste management and health status of the people” - Hon. Twum, DCE, Atiwa District Assembly. 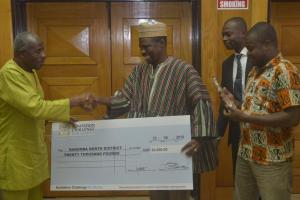 "The awards ceremony has confirmed my initial impression as participating MMDAs are rededicating and making higher commitments towards improved sanitation in their various jurisdictions. I feel highly motivated as an award winner to commit more resources to improve the sanitation situation in my district with hope of winning the ultimate award in the future. I wish to thank and encourage the organisers of the Sanitation Challenge for Ghana for this excellent initiative. It is my fervent belief that it would contribute greatly to improve sanitation in Ghana” - Alhaji Mohammed Ibn Abass, DCE, Nanumba North District Assembly - Bimbilla.

Hon. Alhaji Collins Dauda, Minister for Local Government and Rural Development, presented the prizes to the winning MMDAs at the Accra International Conference Centre. He also launched the second stage of the competition, the ‘Dignified City Award’, which is open to selected MMDAs and will run till June 2019.

The competition, one of the biggest national efforts to improve the sanitation situation is designed to gradually change Ghana’s sanitation nightmare over the coming years.