Clean water, sanitation and hygiene are of critical importance for the people living in camps, but they don't come cheap and many refugees are not going anywhere soon. 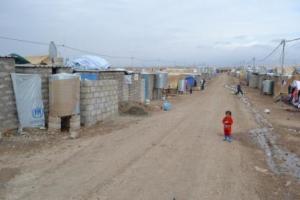 The global refugee figures are at their highest level since the Second World War, a recent report by the UN refugee agency UNHCR says. The global figure of 51.2 million refugees is six million higher than the year before, of which 11.7 million are under UNHCR's care.

The massive increase of refugees and displaced people worldwide is driven mainly by conflicts in the Central African Republic and South Sudan, and the war in Syria - which forced 2.5 million people over the borders and made 6.5 million internally displaced.

“Water and sanitation in the camps is critical,” says camp coordinator Jack who works in two Syrian refugee camps in Iraq with a capacity of 4.000 and 5.000 people. “In the hot season temperatures rise up to 50 degrees. The drainage channel is being worked on, but still waste water escapes which can lead to the outbreak of cholera.”

When thousands of people fled the Syrian-Iraqi border in September 2013, there was no coordination in the camps until humanitarian agencies and the government stepped in. The basic services now provided are food, water, education and health. “People live in tents, some in containers, water is brought in by tanks every day. Refugees get 50 liters per person, which is quite a lot. Still lack of water and unfair distribution is the biggest complaint in the camps. People living here came from developed areas so they were heavy water users. People washing their carpets was one of the daily practices for example,” Jack explains. The WASH actors in the camps had to constantly repeat messages about water conservation and proper use of the water.

The distribution of water to refugee camps can be an expensive activity. In April 2014 IRC started a pilot study in two camps in Ethiopia and Chad where Sudanese refugees live, to measure the life-cycle costs of water services and support their better planning and effective management.

Mélanie Carrasco, Programme Officer at IRC: “Imagine getting water trucks into the desert. This can be really expensive. How much water and what quality do people actually get? That’s what we want to find out together with UNHCR.” The study builds upon the Life-Cycle Cost Approach (LCCA) developed by IRC during its 5-year WASHCost project, which collected and disaggregated expenditure data over the full life-cycle of WASH services. 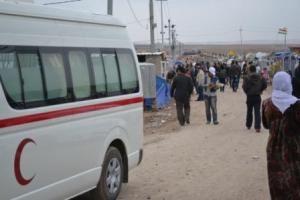 The refugee camps are micro-societies where the same rules apply as in normal societies. To provide good and reliable water and sanitation services, aid organisations should think about sustainability, and the government should fulfill a leading role. Jack: “In the beginning of the camp, communal toilets were put in place. Now longer-term solutions are being prepared such as building latrines and showers made of cement. The objective is for people to return to their place of origin. However, being realistic they will not go back to Syria any time soon, so we have to focus on more sustainable solutions.”

Government ownership is very important. “Technically the last line of authority is local government. But since they are not familiar with the process of helping refugees, humanitarian agencies step in. But humanitarian agencies should have a supportive role, and it is of critical importance that the government has full ownership and authority, and does not get dependent on external support,” he says.