55%-85% of households in Uganda access water services that do not meet the minimum required standards but water users are generally satisfied with the service they receive. A study on the performance of Water Source Committees as service providers for rural water supply in Uganda reveals. 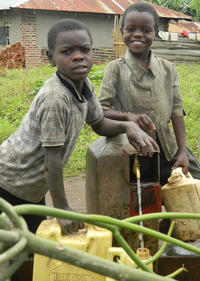 Despite all the drawbacks associated with rural water service delivery in Uganda, water users are generally satisfied with the service they receive. This was revealed in a study conducted by IRC/Triple-S Uganda in 2012 to assess the performance of the Water Source Committee (WSC) as the primary service delivery model for rural water supply in eight districts in Uganda.

The water attributes analysed included the source of water; the quality; the quantity; the distance covered to the source; and the reliability of the source.

It was found that 70% of all the households surveyed in the eight districts accessed a substandard water service characterized by poor quality and inadequate quantity. People expressed dissatisfaction with the quality basing on the color of the water and presence of particles therein.  It was also found that the majority of households accessed less than the prescribed 20 litres per person per day. In terms of reliability, it was found that when sources broke down, it took longer than a week on average to repair them and in some cases it took up to two months.

When all the factors are considered it was found that, depending on the district 55% -85% of households access water services that are not in tandem with the minimum standards prescribed. However, in spite of all those factors, people expressed satisfaction with the service they were receiving, as the briefing note 'Level of service received by water users in eight districts in Uganda' reveals.