A case study on the use of IRC's faecal waste calculator tool in a Delhi slum.

An estimated 200,000 Delhi slum dwellers were evicted as a result of the 2010 Commonwealth Games hosted by India. Some of the evicted were relocated to new resettlement colonies such as Savda Ghevra, which was set up in 2006 in North Delhi and houses nearly 18,000 residents. Since then the municipal authority has become responsible for providing basic services. This includes community toilets, currently used by about 40% of the households. The remaining 60% of households have built their own intra-household latrines, in some cases with support of NGOs.

IRC staff visited the resettlement colony to find out if its toilets qualified as safely managed, improved sanitation facilities. This was determined by using IRC's faecal waste calculator tool. The conclusion as illustrated by the flow diagram below was very disappointing:  0% of the total waste generated was safely treated or disposed. 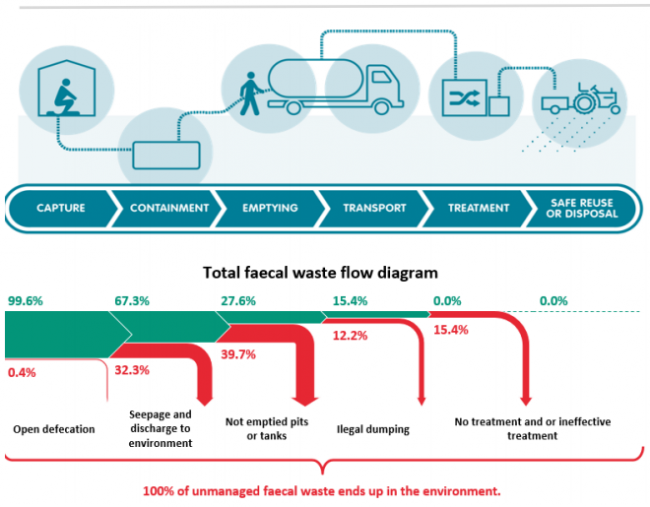 For the full story read the case study "Assessing the sanitation situation in a resettlement colony in Delhi" and accompanying report "Rapid assessment for sanitation services" listed below under Resources.