The Sunyani District has embarked on a second round of data collection on functionality and service levels.

The Sunyani District has embarked on a second round of data collection on functionality and service levels. As part of this activity, a training session for enumerators who will collect data has been held in Sunyani, the Brong Ahafo regional capital.

This forms part of preparations for a second round of data collection for the Brong Ahafo region to monitor functionality of water facilities in the Sunyani West District, one of the focal districts of the Triple-S project in Ghana.

Triple-S (Sustainable Services at Scale) is a six-year, multi-country learning initiative to improve water supply to the rural poor. It is led by IRC International Water and Sanitation Centre.

The initiative is currently operating in Ghana and Uganda. Lessons learned from work in countries feeds up to the international level where Triple-S is promoting a re-appraisal of how development assistance to the rural water supply sector is designed and implemented.

Triple-S is hosted in Ghana by the Community Water and Sanitation Agency (CWSA), the governmental institution responsible for the provision of safe water and water related sanitation services to rural communities and small towns throughout Ghana.

CWSA and Triple-S, between November 2011 and January 2012 undertook data collection on functionality of systems and service levels in the Sunyani West district and two other focus districts (East Gonja and Akatsi). The result of the survey formed the baseline for tracking progress in water service provision over time. It also stimulated discussion around policies, guidelines and practices in the rural water sector and has started informing planning and policy decisions in the pilot districts.

A total of 14 participants drawn from the Planning Unit, Environmental Health and Sanitation Unit, Works Department, District Water and Sanitation Team as well as the Community Development department of the District Assembly were trained for data collection. 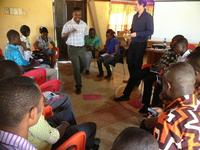 Participants were introduced to the concept of service monitoring, its relevance to the Ghanaian rural water delivery context, emerging issues from the baseline data collected and the next steps. Participants were also taken through the rudiments of Field Level Operations Watch (FLOW) for data collection, navigation using waypoints on the phone and general phone management (conservation of battery power and data transmission at the end of a survey).

Some key staff of the District Assembly, who were not part of the enumerators were also trained. The intention was to   build their capacities   to help them understand and appreciate the works of the Triple-S project in the district to enable the sustenance of the process after the project ends.

The  fieldwork was used to test participants’ understanding of the actual data collection processes and the use of the smart phones. The field work also allowed the survey questionnaire to be pre-tested and subsequently revised.

Participants were provided with a print out of existing location of water points in the various communities in the district, the description and the instance ID to facilitate quick identification of facilities mapped in the 2011 baseline survey.  The team and the participants visited the Odumasi community for the mock exercise. 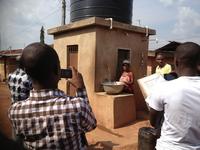 A few challenges were encountered during the course of the training and field work.  Below are a few:

The second round of data collection is expected to build on the first round baseline study. Findings from the baseline study informed some decisions and remedial measures put in place at the district level to improve sustainable water services. The results of this second round study will give indication whether the remedial measures and actions have yielded any positive impact in sustainable water service delivery.