Developing countries are committing to sanitation, water and hygiene services for all by 2030, but accountability remains the "Achilles heel". 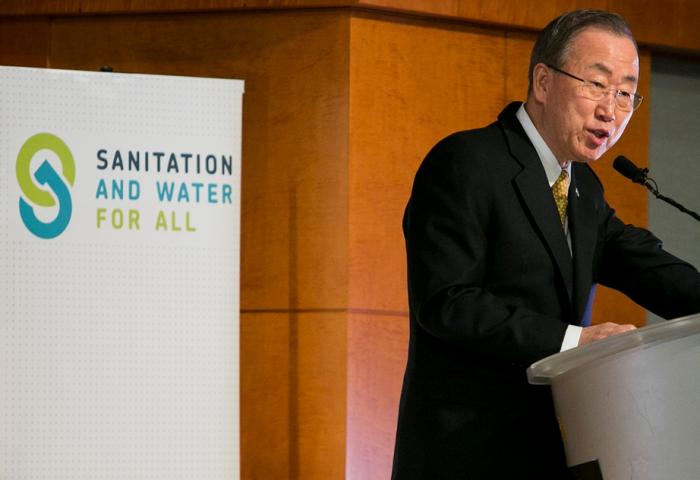 Over 40 developing countries made more than 250 individual commitments to speed up access to sanitation, water and hygiene services.  The countries launched these pledges at the Sanitation and Water for All High Level Meeting in Washington, DC on 11 April 2014.

At the meeting, around 20 countries promised to provide universal access by 2030. Nearly 70 developing countries have adopted universal access policies according to a UN-Water special report. “Universal access to safe and affordable drinking water, adequate sanitation and hygiene for all” by 2030 features (as Goal 6.1) in the latest list of proposed post-2015 Sustainable Development Goals (SDGs) of the United Nations.

IRC’s Erma Uytewaal was in Washington where she saw UN Secretary-General Ban Ki-moon and World Bank President Dr Jim Yong Kim open the High Level Meeting (HLM). Their presence was a sign that the Sanitation and Water for All (SWA) alliance has attracted “the highest political attention for existing challenges in the water, sanitation and hygiene sector”.  This was reinforced a few days later at the first High-Level Meeting of the Global Partnership for Effective Development Co-operation in Mexico where SWA was showcased as a successful example of a multi-stakeholder alliance.

In her blog about the aftermath of the SWA High Level Meeting (HLM), Erma listed the two main themes of the sector minister's dialogue, held one day before the HLM: tackling inequalities and ensuring WASH services that last. While agreeing on the intention to overcome inequity and reach the most vulnerable populations, she felt that too little was said on how to achieve this in practice. Discussions on sustainability highlighted the need to focus on long-term planning. A positive sign was that at least twenty countries explicitly mention sustainable service delivery in their HLM 2014 commitments.

Vice-chair Darren Saywell sees a major role for multi-stakeholder alliances like SWA to “foster the collaboration and mutual accountability” necessary to realise the ambitious post-2015 Sustainable Development Goals (SDGs).  While SWA has been working to make the HLM commitments “SMART” ( Specific, Measurable, Accurate, Realistic and Time-bound), accountability remains the “Achilles heel of many of the countries participating in SWA”, Erma writes. Holding governments accountable for their commitments is often a role that civil society organisations (CSOs) fulfil. WASHwatch.org is an example of a CSO platform that monitors government policy commitments and budgets.

IRC is an early member of the initial core group that drove SWA’s formalisation in 2010 and has a seat on a task force, which supports national planning in off-track countries. It has formulated its own commitment statement to the SWA partnership.