Snapshots from our focus countries: Uganda

We take you on a journey through highlights of our focus countries, collected for the IRC Annual Report 2018.

Strengthening the S in WASH: sanitation

"The hand pump mechanic has been coming monthly to check on how the system is moving. Especially when we need general or minor servicing." - Miriam Ankunda, caretaker, Karambi sub-county, Kabarole district

In 2018, we've helped the Hand Pump Mechanics Association (HPMA) in our partner district, Kabarole, to start providing faecal sludge management services. We have been supporting the HPMA along its journey to becoming a viable business unit since 2012. This work falls under strengthening institutions, a WASH-system building block. We've helped it with capacity building and most recently, acquiring a pit-emptying kit. In 2018 HPMA's scope broadened from working on water services to maintaining sanitation facilities. The Association is now active in safely collecting, transporting and disposing of faecal sludge, leading to better sanitation services in the urban areas of Kabarole district.

Another related highlight is working with the Kijura Town Council Executive on a household sanitation promotion campaign. Previously IRC and HEWASA conducted a water quality status survey in Kabarole District. The survey found that 80% of sampled water sources were contaminated with E-coli, and Kijura Town Council was one of the most affected areas. One of the main causes was the lack of standard sanitation facilities in many households. Some of those households belonged to leaders on the Town Council Executive. When the findings were presented to the Town Council Executive, they resolved to undertake a sanitation promotion campaign, starting with the households of political leaders, who would then provide a good example to their constituents. The situation has since improved greatly, and a follow-up study showed an improvement in water quality. 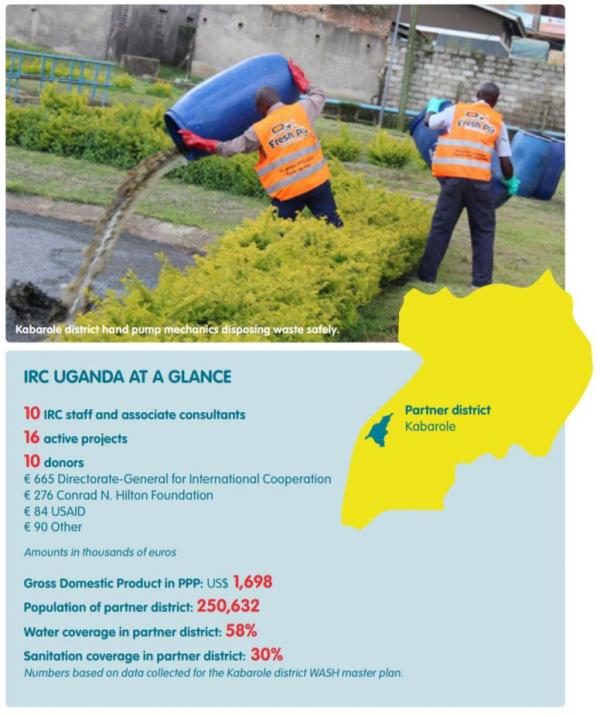 Each of our focus countries have stories to tell. From supporting the development of master plans in our partner districts to running in the heat to raise awareness and motivate action for improved sanitation. Check our other country highlights for more stories.