A series of training workshops have been organized by CWSA/Triple-S Project in the Sunyani West district in September, 2013. The training workshops were aimed at introducing participants to the use of a Short Messaging Service (SMS) for reporting the functionality of water facilities, facility breakdown, sourcing of spare parts and services of area mechanics. 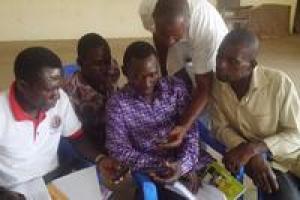 These locations were chosen to facilitate easy access to the training venues, especially for people from remotely located communities. The training sessions were facilitated by staff (resource persons) from Sky Fox Limited, an Information Technology and Services company, CWSA/Triple-S and the Sunyani West District Assembly.

Presentations were made on how the SMS system is expected to operate and potential contributions it could make to reducing service downtime. Series of group works were organized and participants were given the opportunity to use their own mobile phones for demonstration on how to report facility breakdown, source for spares and fill-out the log sheets indicating the various processes involved from the time of breakdown to when the facility is up and running again.

They were introduced to various stages of using their mobile phones to report on a facility breakdown and how to order spare parts.

An aged-man, Opanyin Kwesi Donkor, a facility care taker from Donkorkrom community was very grateful for the training which he said could help reduce downtime of facilities in their locality. However, his concern was that people always want to fetch for free. This has always resulted in lack of funds for maintenance and repair works on the facility. In such a situation, it will be difficult to do payments using the mobile money system. With the old system, the area mechanic could carry out the repairs and get paid at a later date when money is available. This will therefore make it difficult to fully adopt the new system.

In order to get stakeholder buy-in and inputs, a presentation on the SMS system has been held for all stakeholders involved in the project at the Sunyani West District

As with the introduction of every new initiative there are always some challenges which could affect the success of its introduction. Some of these observations and efforts at addressing them are as follows; These identified challenges are being monitored and addressed from the beginning of the project to ensure the successful implementation of the SMS system.