We have started the final year for reaching the Millennium Development Goals, including the one aiming to provide safe water for and access to sanitation for half the world population. The Water, Sanitation and Hygiene (WASH) programme of BRAC is one of the largest sanitation implementation programmes in the world working successfully towards reaching that goal in Bangladesh. BRAC WASH Programme director Dr Akramul Islam used a dissemination workshop to share results as well as challenges and ask for feedback on the draft future strategy for BRAC WASH 2016-2020.

The scale (covering half of the country, reaching 66 million people) and impact of the programme since the start of the first phase in 2006 were presented by the Vice Chairperson of BRAC, Dr Ahmed Musthaque Raza Chowdhury who chaired the event. Dr Chowdhury acknowledged that political commitment and government leadership are key for success. Thanks to the support and contribution of government, development partners and NGOs, BRAC WASH has been able to achieve all this.

To gather sector feedback, the future strategy for the BRAC WASH programme was presented at a dissemination workshop on 14 January 2015 to more than 120 participants from governments, development partners and WASH sector practitioners. It is based on the successful interventions in rural areas over the past 10 years. Dr Akramul Islam explained: “BRAC WASH works towards a vision of Bangladesh with safe, sustained water supply and sanitation and hygiene for everyone, everywhere, all the time”. He stressed the importance of sustaining the gains, but also to address urgent challenges such as faecal sludge management, water security and quality, enhanced secondary school programmes and alternative sanitation technologies at scale.

BRAC WASH works towards a vision of Bangladesh with safe, sustained water supply and sanitation and hygiene for everyone, everywhere, all the time

In the coming years, BRAC WASH will continue to implement, but more focus will be put on advocacy and working in partnerships. BRAC WASH will expand its activities to critical areas in the country such as urban and coastal areas. The hundreds of small towns dotting the rural areas lack adequate waste disposal, safe sanitation and water services; and, they lack the organisation and expertise to address these needs. For coastal areas access to safe water is a huge challenge. In 2015 BRAC launched, with its own resources, a pilot in coastal areas giving greater emphasis to water provision and water resources.  For BRAC WASH, this expansion to new areas also means more focus on collaboration, facilitation and advocacy rather than direct service delivery.

Ms Zuena Aziz, Additional Secretary and Director General, Local Government Division, Ministry of Local Government, Rural Development and Cooperatives, Bangladesh, one of the distinguished guests, noted that Government and BRAC/NGO findings are the same. “This is a great achievement. Without the help from NGOs and other development partners this would not have been possible. We are aligned in our thinking.”

Distinguished guest Ms Martine van Hoogstraten, Deputy Head of Mission and Head of Development Cooperation, Economic Affairs and Trade, Embassy of the Kingdom of the Netherlands in Dhaka, Bangladesh, highlighted the importance of an integrated approach to hygiene, sanitation and water. BRAC WASH demonstrated that such an approach can deliver long-term change. At the same time she also warned that it requires “sustained and intensive engagement with communities, and a long term commitment to maintain and improve on gains already made.” 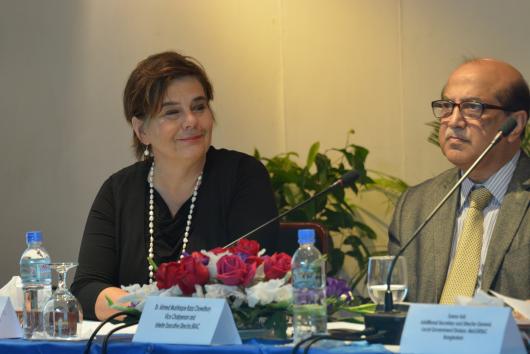 In her speech Van Hoogstraten told the participants that the Dutch government has committed to contribute to the MDG WASH target by providing sustainable access to safe drinking water and improved sanitation for an additional 50 million people by 2015. The Netherlands Embassy’s support to the BRAC WASH programme, since its inception in May 2006, has significantly contributed to this commitment. She also stressed that “an important contribution to the programme has been the co-funding by the Bill & Melinda Gates Foundation, the UK Department for International Development (DFID) and the Australian Department of Foreign Affairs and Trade (DFAT) since 2012, as well as the technical support by IRC since 2005.” More recently Charity Water (1 August 2014 – 31 August 2015) and Splash (1 October 2014 – 30 September 2015) have started supporting BRAC WASH.

Mr. Kazi Abdul Noor, Project Director (Joint Secretary) Policy Support Unit (PSU) Local Government Division, Ministry of Local Government, Rural Development and Cooperatives, Bangladesh said “I believe the work is definitely going to be continued, since support to the sector was a part of the political manifesto as well as there is a high government commitment to carry out WASH related work. One fourth of the population of Bangladesh belongs to the hard to reach areas, and all the WASH sector players are heavily contributing to improve the situation which is very positive”.

Scale and impact of BRAC WASH over the past ten years

Just over one in three households (33 %) had a hygienic toilet at the start of the programme according to an independent evaluation from the Research and Evaluation Department at BRAC. At the end of Phase I (2011) eight in ten households (83%) had a hygienic toilet. Over the same five years (2006-2011), waterborne diseases decreased by three-quarters (from 9.4 % to 2.3 %).

One of the issues participants at the meeting have emphasised was the role of hygiene. “We have learned that hygiene is not a single initiative. BRAC can take the lead in developing and sharing what should be the indicators for hygiene promotion.”

The importance of including the poor was stressed several times. “Partnerships should be inclusive, not only public and private, but also with the poor as participants (PPP-P) and women as the first care takers”. This PPP-P should be the anchor for the project implementation.

Another issue that was raised: Emphasis on sustainability at all levels is really important. There was an immense push for the MDGs and we don’t want to go back after we have reported on all the achievements. There is a real risk of slippage.

Role of IRC in the BRAC WASH programme

IRC works with BRAC WASH as a ‘knowledge partner’ since 2005 when the programme was designed.

Mrs Ingeborg Krukkert from IRC highlighted the main outcomes of six action research projects funded by the Dutch Government to address the key WASH challenges identified in the first years of the programme.

These challenges are safe drinking water in areas with arsenic contamination or salt intrusion; sanitation technologies in areas with high-water tables; finding marketable and safe solutions for all the human waste now that toilets are filling up; how to make access to information and the whole monitoring process easier and more user-friendly.

In addition, some innovative approaches taken up by the programme after the first phase were highlighted: qualitative monitoring shows what people do with their facilities; what behaviours they adopt; social marketing approach for more effective behavioural change communication; and costing studies to compare costs with the level of services provided at household level, schools and in piped water supply.

Strategy 2016 - 2020 BRAC Environmental WASH programme : everyone, everywhere, all the time