At the crossroads of health, water and sanitation in Niger

The capital city of Rwanda has turned a delay in funding for new centralised sewerage system into an opportunity. It has revised its plans so that more areas will get connected 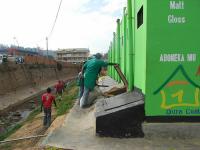 Construction of a US$ 70 million wastewater treatment plant in Giti Cyinyoni, Nyarugenge District, was due to start in 2012 but has been delayed by one year.

The lack of a centralised sewage system in Kigali (pop. 1 million) has been forcing real estate developers to provide onsite sewerage systems for new housing units. Schools, hospitals and other public buildings are already required by law to have their own sewerage systems. In future all these onsite systems will be connected to the new centralised system.

In 2008, according to a survey, 80% of the people in Kigali still used pit latrines [1]. These have proved to be not only hard to maintain, but also expensive to manage in the long run. That’s why the city council recently passed a bylaw that instructs developers to install flush toilets connected to septic tanks.

At the crossroads of health, water and sanitation in Niger