Kèlè Tchinè is a project that aims to accelerate universal and sustainable access to sanitation in ten rural communes in the central west region of Burkina Faso.

On Tuesday 23 March 2021 in Koudougou, the steering committee held a workshop on the project to accelerate universal and sustainable access to sanitation (Kèlè Tchinè) in ten rural communes of the central west region of Burkina Faso. Chaired by the governor of the central west region, this meeting aims to facilitate consultation between the stakeholders on the implementation of the project.

Water is life, is always being advocated. However, one of the major development challenges in Burkina, and particularly in the central west, is adequate access to drinking water and sanitation services. Indeed, national statistics show a sanitation access rate of 19.7% in 2020 and 16.9% in the central west region.

This shows that more than ¾ of the population does not have access to adequate sanitation. With this in mind, a consortium of NGOs composed of Eau Vive Internationale, WHH, IRC and SOS Sahel was formed to join forces with the local authorities to carry out a joint project called Kèlè Tchinè in the Lélé language, which means "the hygiene of the concession".

The objective of the project to accelerate universal and sustainable access to sanitation in ten rural communes in the central west region of Burkina Faso is to take stock of the project's implementation since its inception. And to discuss the main difficulties encountered and identify solutions to improve the project's implementation and to plan the priority activities for the following year. It is financed by the European Union to the tune of one million five hundred thousand euros.

The opening ceremony was attended by regional and communal authorities, including the governor, who was also the chairperson of the activity, Irène Coulibaly; the secretary general of the region; the president of the regional council; the high commissioners and the various mayors of the beneficiary communes.

In his speech, the president of the regional AMBF, Tambi Pascal Kaboré, said that this workshop is the culmination of collective and considerable work undertaken since 2019. Hence his wish to see the involvement of all for a successful project.

Nearly 170,000 people will be directly affected by the project

According to Jean Philippe Jarry, country director of the NGO WHH and head of the consortium, this project will contribute to improving access to sanitation services in rural areas in a sustainable manner, taking into account the human rights-based approach. He added that the project will eventually make it possible to build 4,000 latrines and 4,500 cesspools, rehabilitate 500 latrines for households, train and equip 224 local craftsmen (masons), and build the capacities of the populations of 112 villages in good hygiene and sanitation practices. 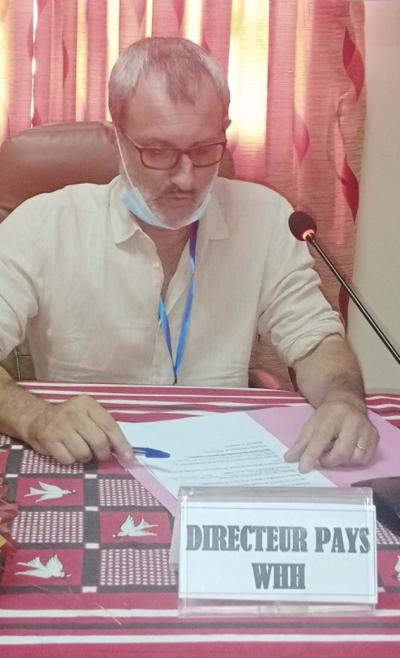 According to him, nearly 170,000 people will be directly affected by the project in the long term. Jean Philippe Jarry ended by inviting all the participants to an open approach to better identify the challenges for the success of the project. He said: "I strongly believe that through a synergy of action between the different actors, we can achieve significant results for the well-being of our people."

Large health expenses due to lack of sanitation

The president of the ceremony, Irène Coulibaly, governor of the central west region, before officially launching the proceedings, stressed that a lack of hygiene and sanitation is one of the main causes of the so-called faecal peril diseases, the main cause of death among children and the elderly. She said that the expenses related to the lack of sanitation are estimated at more than 10 billion FCFA per year for health care according to WHO statistics. Hence, according to her, the urgency of eradicating this problem which poses a heavy burden on the well-being of the population as well as its socio-economic development.

She also said that the implementation of the Kèlè Tchinè project will help achieve the objective of the government's policy through its National Wastewater and Excreta Sanitation Programme, which aims to ensure sustainable management of wastewater and excreta by 2030. While reiterating her commitment to accompany them in the completion of the project, Irène Coulibaly invited the participants to have frank discussions that could remove the blockages and enable them to go back to the field with more determination to implement the remaining activities of the project.