Running for Water - what did we achieve?

Some months have passed since the successful wrap-up of our first crowdfunding initiative. We now reflect on how the campaign has brought change to Kabarole district, in Uganda. 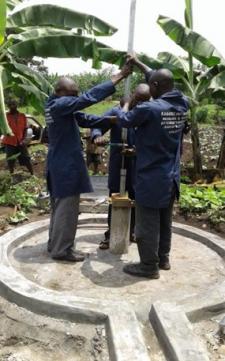 It all started in March 2017, when IRC staff, family and friends participated in The Hague’s City Pier City run. Our purpose? To raise 10,000 euros to provide 1,500 people with safe water in Kabarole district, in Uganda. The project especially aimed to improve the situation of girls. Reducing distances to fetch water has significant impact on their future as it allows them to spend more time in school. The target amount was successfully reached with the much appreciated help of 282 generous sponsors through the One Percent Club crowdfunding platform.

So what has been accomplished in Kabarole district over the last few months? The process concentrated on the rehabilitation of five broken boreholes and was guided by IRC’s systems approach. A large network of people and organisations worked together to assess and restore the functionality of the boreholes and to engage and mobilize the beneficiary communities. The Kabarole District Hand Pump and Scheme Attendants Association (KAHASA) and their trained mechanics were responsible for the assessment and rehabilitation of the boreholes. Water User Committees (WUC) were formed from local community members and educated about their responsibilities to support the management  of each borehole.

Communities have agreed to start paying for their water on a  'pay as you fetch' basis. This management model raises funds for operation and maintenance to help avoid returning to a history of partial repairs and frequent breakdowns.

And one more accomplishment...

In appreciation for the support of IRC and its sponsors, KAHASA offered to repair the rainwater harvesting system of the Burungu Primary school. Now the tanks can supply the school with clean water locally for at least two months in a rainy season.

Our work on the five boreholes in Kabarole district hasn’t ended. The water user committees will be officially registered, bank accounts will be opened for depositing the water user fees and the boreholes will be continuously monitored and maintained. Most importantly, this experience will be used to encourage similar crowdfunding campaigns to carry out rehabilitation activities on broken down water facilities, meanwhile building the systems to help avoid returning to a history of partial repairs and frequent breakdowns. Since the start of this initiative others have started to adopt the 'pay as you fetch' model for instance.

Which leads us to...

The story of Kabarole district taught us that even with relatively small funds, the support and good intentions of the public can mobilise large networks to bring about change. ”Running for Water” has given 1,500 people sustainable access to safe water in Kabarole District in Uganda. Through the rehabilitation of five broken boreholes in the area, the distance girls have to walk to collect water is reduced significantly, meaning that girls can now spend more time in school. Driven by the success and encouraging power of crowdfunding, IRC is ready for another run for water in  March 2018. Will you join us again? Keep an eye on our website and social media for more details to come.

By Sara Bori, Intern at IRC for the International and Innovation Programme. With inputs from IRC Uganda

Running for water: keeping girls in school in Uganda

From the borehole to the pond and back again: breaking the vicious cycle of dirty water consumption