We are delighted to announce that the WASHCost e-book, Priceless! Uncovering the real costs of water and sanitation, is available for free download on IRCWASH from September 2014.

Priceless! describes the journey we took with partners worldwide in our first multi-million dollar and multi-country initiative, WASHCost. 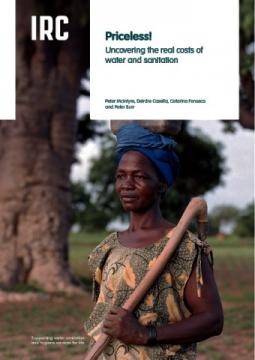 "Many developing countries show enormous effort and commitment to ensure that their citizens gain access to the basic necessities of life - and nothing is more fundamental than clean water and hygienic sanitation. But their efforts are constrained by lack of basic information and the absence of systems to monitor the quality of services. ...

This book describes how the IRC-led project worked in four countries, with government and local organisations, to uncover the real costs of sustainable and acceptable services, and how [together, the team] attempted to ensure that countries would never again have to work in ignorance of some of the basic facts of economic life. Together they developed a new vocabulary, new approaches and a means of embedding change in country structures. ... [It] presents the management and practical challenges of working in a sector that had a collective loss of memory about what had been spent and what had been missed. It shows how finance and economics are intimately connected with issues of quality and service. It reveals the tensions in trying to be intellectually rigorous and practical at the same time, the tensions of being accountable to country governments and a grant donor, and the complexity that is inherent in leading real change to water and sanitation" (excerpted from the book's blurb).

You are most invited to join the book's official launch in:

Stockholm, Sweden – Tuesday 2 September during the 2014 Stockholm World Water Week (Exhibition Booth No. B01:63; 5 pm). Meet IRC's CEO Patrick Moriarty; Advisor and formerly Global and Regional Manager of WSP-WB, Piers Cross; IRC Ghana Director, Vida Duti; and Water For People India Country Director, Arumugam Kalimuthu, and listen to them share a few words on how WASHCost contributed to changing approaches to service costing and budgeting. Until supplies last, free copies of the book's paperback edition will be distributed during the event.

Free copies will also be handed out in the following venues:

Hanoi, Vietnam – 15 till 19 September during the 37th WEDC International Conference: Sustainable Water and Sanitation Service for All in a Fast Changing World.

For more information on the book, drop us a line at: www.ircwash.org/contact-us.

Find a free E-version of the book here