MUS can bring benefits to Honduran farmers but requires support

Analysing the outcome of applying guidelines for multiple-use water services in the area MAMCEPAZ area of Honduras. 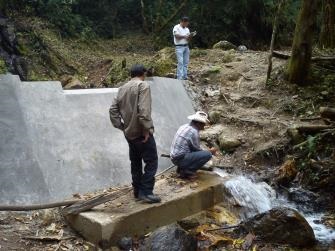 IRC has been working on the topic of multiple-use water services (MUS) in Honduras since 2008. This work resulted in a joint study published in 2009 with RASHON on the impact of MUS on the sustainability of water services in 14 communities in Honduras. The study determined the different categories of users based on their livelihoods, and the consumption for productive uses.

In 2011 IRC and RASHON developed a set of guidelines for the planning and implementation of MUS projects. The guide was applied in eight pilot projects in MAMCEPAZ (an association of municipalities in of the Department of La Paz), a region of Honduras known for its coffee, but also for subsistence crops like maize, beans and plantain.

Between 2011 to 2014 Andrés Gil has gone back to six out of the eight municipalities that were part of the pilot project to document the experience. This has resulted in a report Servicios de Usos Múltiples del Agua en MAMCEPAZ. Sistematización de la experiencia piloto de implementación del MUS en Honduras.

The report focuses on (technical) planning and design; Implementation of MUS community level-principles; and the benefits of applying MUS.

One of the findings was that in the communities the water use was lower than expected. This was because for the community it was not clear to what extent they could make use of the water, thinking that the water system was only designed and intended for domestic use. This is basically showing that there was a lack of strong technical support.

In terms of setting up a financing mechanism for the different uses of water, we found that in one municipality they had set up to ten different tariffs for different types of water use. One of the recommendations that the study generated was to look into setting up tariffs according to water user type instead of activity type (e.g. gardening, car wash, coffee processing).

The study also confirms that in terms of technology, gravity systems fit quite well with MUS, as it requires hardly any changes to improve the service. It is also a technology that the water committees know how to handle well.

Applying MUS also brought monetary benefit for the communities. Income and savings did increase due to irrigation of coffee plantations, family gardens and fish farms.

In general we saw that the MUS pilot projects did generate the basic conditions so that users could use their systems: they have sufficient capacity, there is appropriate technology and there is some level of awareness on the issue. However, one of the weak areas was the support. The institutional conditions have been insufficiently developed. Applying a MUS approach not only requires changes during project implementation; but also strong ongoing post-construction support for the expected benefits to materialise.