Monitoring is one of the key building blocks for an effective WASH system, which generates the information and feedback that facilitate adaptive change and well as planning and regulation.

WASH systems thinking is the idea that drives IRC's approach to the development, implementation, and sustainability of WASH services. The interplay and collective performance of all the factors that contribute to the effectiveness and sustainability of WASH services are at the heart of IRC's understanding that the provision of these services happens in a complex system. For services to be provided and maintained, every actor and aspect of the system needs to function and to be effective and adaptable.

Monitoring is one of the key building blocks for an effective WASH system. It refers to the processes of capturing, managing, and disseminating the information needed to effectively deliver WASH services at all levels. Monitoring generates the information and feedback that facilitate adaptive change as well as planning and regulation. Monitoring must be done systematically and must be reliable to be used as a basis for policy and investment decisions by different stakeholders in the sector.

Information is typically collected from users and on infrastructure about the services being delivered to whom, when, how, and of what standard or quality. This could be in terms of functionality and reliability of water points, for example. Such data is vital for improving the routine management and delivery, as well as long-term planning, of services. Most important, monitoring data has to be analysed and the results communicated to facilitate decision making at various levels.

IRC's 2017 baseline study of WASH systems at the national level and in Kabarole District found that the national monitoring system was operational in Kabarole and covered the entire district including all communities and service providers.

Based on the 2014 population and housing census projections, Kabarole's population is estimated at 325,261 and 77,765 households with an average size of four people. The district's local government administrative structure is made up of one municipality, one county, three municipal divisions, four town councils, 11 sub-counties, and 45 parishes spread across 365 villages. With the opportunities that Kabarole's resources and geography offer, there is a lot riding on the quality of WASH services available in the district. In fact, improvement in the overall condition of WASH is considered an important socio-economic enabler for the district.

With a master plan in place to guide WASH investments and budget allocation decisions, the District Local Government (DLG) and its partners are keenly interested in monitoring and measuring progress as the plan is rolled out.

An assessment of the state of water services that was undertaken in April 2017 fed into the development of the District WASH Master Plan which was ongoing at the time. Data was collected from hand pumps, piped water networks, sanitation facilities, water and sanitation committees, health centres, and schools. A mobile tool known as Akvo Flow was employed to collect the data that was used to assess functionality, level of service, and performance of service providers. Beyond such large scale periodic monitoring, there is another kind of more routine monitoring of WASH services that goes on in the district through various structures. During the quarterly district coordination meetings, stakeholders share information about their activities. According to Sam Tusiime, a Community Development Specialist with Technical Support Unit 6 (TSU6) of the Ministry of Water and Environment in Kabarole, the information provided during the district coordination meetings is invaluable: "It gives us a picture of who is doing what, what's going well and what isn't going well, what works and what doesn't work, and we're able to scale up or maybe discourage things that don't seem to be useful." 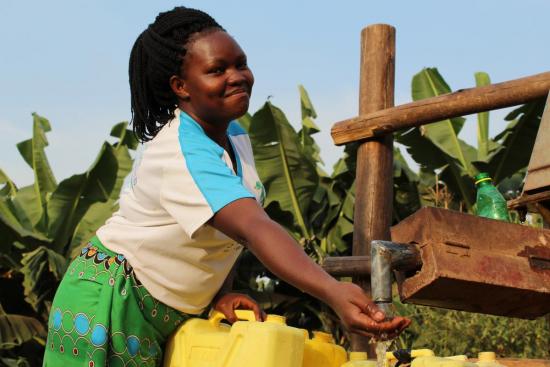 Another platform is the Kabarole District WASH Task Team which serves a dual function as a monitoring structure and an advocacy forum. Its members include elected councillors, sub-county representatives, civil society organisations, cultural and religious leaders, the private sector, and technical staff of the DLG. The task team played a key role in pushing for the District WASH Master Plan, which is a measure of its influence within the district's decision-making circles.

The culture of generating and utilising data to monitor services, to plan, and to inform decisions about the allocation of resources is gradually taking root. For instance, through the district investment plan and the results of an IRC study on marginalised communities, the District Local Government (DLG) and the Ministry's Technical Support Unit (TSU6), have data on the underserved areas and on that basis can determine what is needed to ensure they get covered. The Ministry also collects data on a quarterly basis through the District Water Officers. The plan now is to move from analogue to digital methods of data collection and information management. Already Akvo Flow is being put to use in the neighbouring district of Kamwenge and being piloted in Bunyangabu for that purpose.

Whereas IRC has facilitated the use of Akvo Flow in Kabarole before, TSU6 is adapting it to collect data for asset analysis on a number of variables including the physical state of the facilities, their age, and their overall functionality. This analysis will help in planning for services. TSU6 is also carrying out water quality surveillance and monitoring in conjunction with IRC and the Albert Water Management Zone. In his position as team leader for TSU6, Peter Opwanya's job relies heavily on data, which is essential for WASH service and performance monitoring. "Looking at the data we're able to provide feedback to the communities about which sources have high contamination levels and we can advise them on what needs to be done," says Opwanya.

The district is now using the data from the asset inventory and other monitoring evidence in planning and decision making about resource allocation.

TSU's goal is to shift all its data processes to an electronic platform. This, according to Opwanya, will "minimise errors and forgeries because people sometimes go down and start forging data. But with the electronic way, you're able to pick coordinates and to take photos. It's more authentic."

Monitoring technologies such as IRC's mobile phones for water (M4W) raised the efficiency of information management systems. According to Steven Birungi, Programme Officer at HEWASA, "M4W opened the eyes of WASH stakeholders, knowing that we can get updates in real time and we can monitor the periodic changes in terms of functionality of different water sources." Opwanya believes that with the resources and effort invested in entrenching the culture of evidence-based monitoring and decision making, Kabarole District is on the right track.

The IRC baseline study of 2017 served as a foundation for the District WASH Master Plan. Going forward it will be IRC's reference point for monitoring WASH systems nationally and locally in Kabarole. "We now have a new monitoring framework aligned to the Sustainable Development Goals and the National Development Plan," says Opwanya. The data from the monitoring system is used to some extent at the district level to guide planning and allocation of resources. But the challenge is that whereas the district collects and updates data on performance indicators annually, the data is not analysed for use at service provider level. According to Opwanya, there is an opportunity to start using the revised and updated WASH district investment plan to guide planning. A new performance monitoring framework was developed to take into consideration the SDGs and the second National Development Plan.

A baseline for the District WASH master plan

The IRC baseline study of 2017 revealed that Kabarole District collects and updates data on performance indicators annually. This data is to some extent used to guide planning and provide technical assistance where there are gaps. However, among the major challenge uncovered is that the data was not applied consistently to improve the operational performance of service providers. Besides, the District Water Office had neither developed performance improvement plans for service providers nor fully utilised the data.

The study also found inconsistencies between the district and the national data, and discrepancies between the findings from the service level assessment and the national data. Whereas the service level assessment showed that functionality of rural water supply systems was at 59%, performance on the same indicator was at 82% in the national water database. This suggests a problem with the data collection or processing techniques, hence raising doubts about the reliability of the data.

The job of TSU6 is to link the national and sub-national levels by disseminating policies, guidelines, and information on emerging issues and new technologies. All these must be explained to the politicians through the district advocacy meetings before being adopted and implemented. "We bring the council, the politicians, technical people, heads of department, NGOs and we explain to them the priorities and the key emerging issues," says Opwanya. "We try to demystify some of those issues so that we bring them at par with the technical people."

The objective of the district advocacy meetings is to win political support. With this support, technical people will not face resistance from the political leadership once they start implementing programmes. Through this engagement, the politicians are empowered to go down to the lower levels to conduct sub-county advocacy meetings to pave the way for the technical people to do the actual implementation. In Kabarole, the District WASH Task Team has politicians on board such as the secretaries for works and for health. The team is like a district think tank where plans are discussed and ideas fed to the district executive and the council.

"When politicians are informed about a local government programme, they buy in quickly as they see it as political capital they can gain from," says Opwanya. "In some districts the technical people want to keep the information to themselves and that complicates things." Opwanya advises: "Once you inform politicians about what you're going to do, what you've planned to do, how you're going to do it, they become very active and they want to be involved. They even want to go to the field. We do monitoring with them and when they are in the field they want to interact with their voters and that is good for them. My message is that do not keep information away from politicians. If you keep it away they will definitely fight back and that will antagonise the implementation process."