IRC joins UWASNET Board of Directors 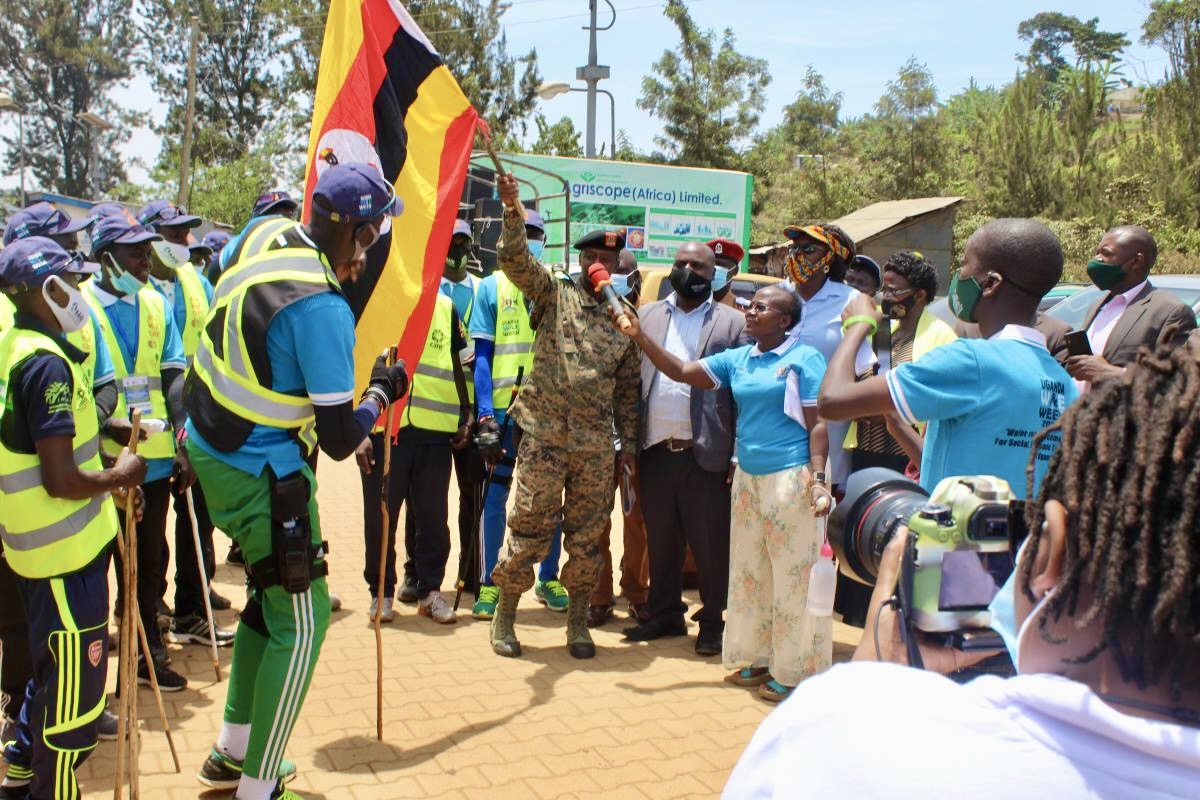 IRC Uganda and its partners supported and participated in the series of Uganda Water and Environment Week 2021 activities in Kabarole to raise awareness about the sustainable use of water resources.

At the closing of the regional week activities in Kasese, Martin Watsisi, the Regional WASH Advisor of IRC Uganda gave a keynote address on 'A systems approach to water resources management'. These activities were a lead up to the national event happening in the week of 22 March.

“Water a thorn, get a rose. Every small action we do as stakeholders in the region for water and environment will have a direct positive impact on the socio-economic growth of tourism in the city,” said Mr Brian Guma, Team Leader of Albert Water Management Zone

The Albertine Region, in which Kabarole district is located, joined the national Water and Environment Week 2021 (UWEWK21), a series of events to mark World Water Day and related sector days. The UWEWK21 was organised by Uganda’s Ministry of Water and Environment under the theme ‘Valuing water and environment resources for socio-economic transformation’. The Albertine UWEWK21 events which took place between 15 – 19 March were championed by the ministry agencies namely the Albert Water Management Zone (AWMZ) and the Regional Water and Sanitation Agencies in collaboration with civil society and public institutions. 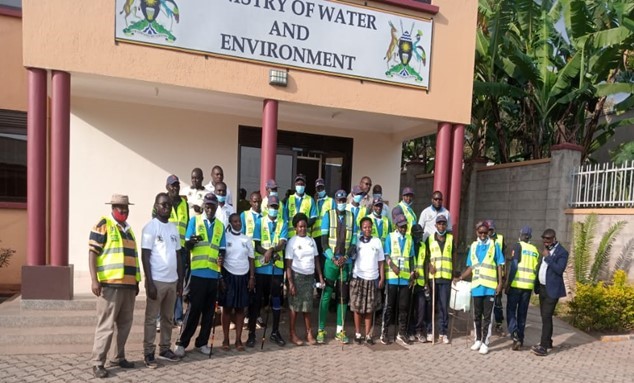 Officials from the government regional agencies and partner organisations welcome the Walkers Association team in Fort Portal, Kabarole, on 16 March 2021

“Keeping our water sources and households clean is key in driving the economy.  Infections that come from poor hygiene and sanitation are the cause of poverty in our community because we spend all our money treating diseases,” Hon Rwabuhinga, Kabarole District LC5 Chairman.

Walking the talk: the trek to Rwenzori

Sharing their experience of the trek, the walkers expressed disappointment that while the region was well-endowed with natural forest cover, the environment was heavily polluted by plastics seen floating on river Mpanga as one enters Fort Portal city.

“The tree cover is disappearing! What is the government doing about this? Bottling companies must put up recycling plants in the region to regulate plastics congestion.  Otherwise, in 5 years from now, the plastics will cover the entire country”, said Ayeni Geoffrey, President of the Walkers Association of Uganda.

Government should enforce the companies to see how they can control their waste products because they are the cause of this problem. They should sensitise the people on how to dispose of this plastic waste.

The government agencies are optimistic that the catchment-based water resources management approach will yield results. However, there are challenges in enforcing environmental laws and policies as the government relies heavily on community policing.

“As civil society, we act for social justice, the call is on the government to enforce the laws, but we urge them to keep a human face. Instead of harsh enforcement, let us promote conservation which does not exclude the people, but enables them to use the resources sustainably,” says Martin Watsisi, IRC Uganda.

Feature image shows a team from the Uganda Walkers Association arriving in Kabarole after covering 370km from the Kampala starting-point. 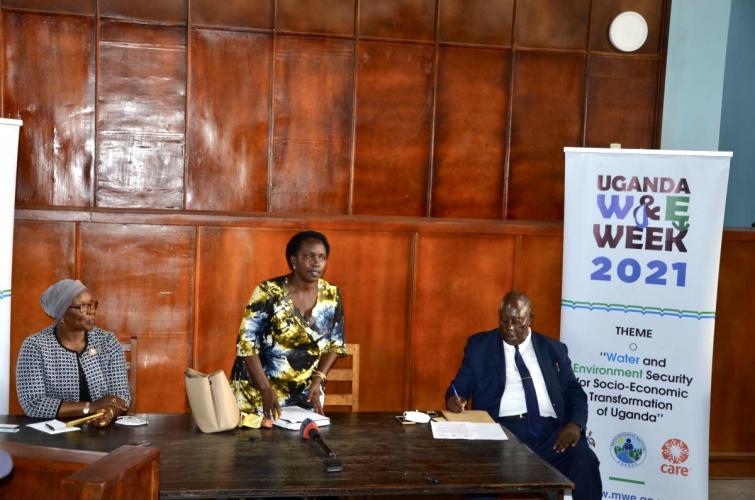 The kingdom officials are mobilising the people to plant 10 million trees along river Mpanga and its catchments. Water catchments in Tooro have been highly degraded due to dwindling forest cover, widening river-banks and wetlands encroachment.

“Now we face both floods and severe drought here which was not the case before,” Mr Polly Kateeba, the Tooro kingdom Minister for Lands and Environment said.

Tooro Kingdom and other partners trying to save the river Mpanga water catchments say that the move is intended to safeguard the river which is a lifeline for hundreds of people, flora and fauna.

“People should plant trees, we are proud as Tooro Kingdom we have rare trees only found here in the whole world at Mpanga gorge”, Joan Kantu, the Tooro Kingdom Minister of Tourism says. Adding, “The river Mpanga problem starts at the source upstream and then in the middle stream in Fort Portal city and Kabarole and then downstream in Kitagwenda which we must address now”. 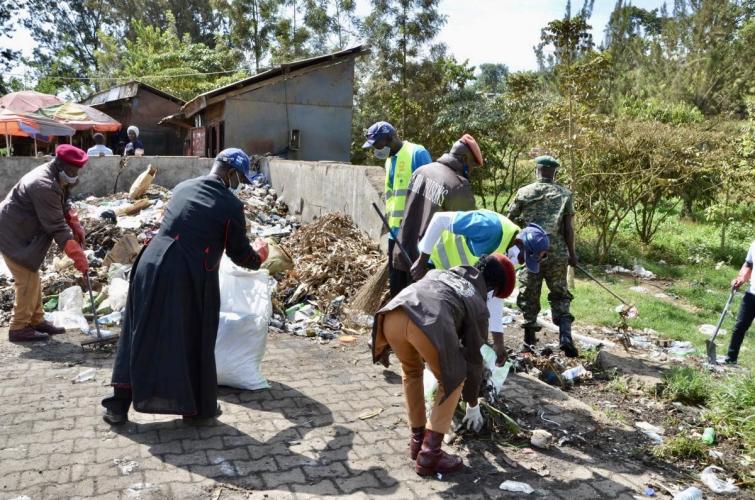 The Catholic church in Kabarole with the leadership of Rt. Rev. Dr. Muhiirwa and state security agencies participate in the city clean up campaign at Mpanga market.

State security agencies including the Uganda People’s Defense Forces, Uganda prisons, religious organisations, Toro Botanical Gardens and local government officials all joined the Ministry of Water and Environment organisers and its partners in public dialogues and community campaigns to build awareness on a clean environment in Fort Portal city.

The Chief Cleaner the Rt. Rev. Dr. Robert Muhirwa Akiiki, the Bishop of Fort Portal diocese highlighted the need for people to protect water sources so that they remain clean. “Dirty water will make our people sick; when we keep the water sources such as river Mpanga clean we save lives. In this planting season, let us plant more trees instead of cutting them because without trees there will be no rain but drought,” he said. Bishop Muhirwa asked the leaders to play their role in implementing and enforcing the laws governing natural resources in this country.

The host agencies also involved schools within Fort Portal city, sensitising the learners about tree planting for safeguarding the environment. 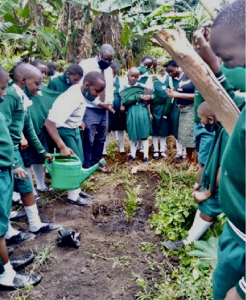 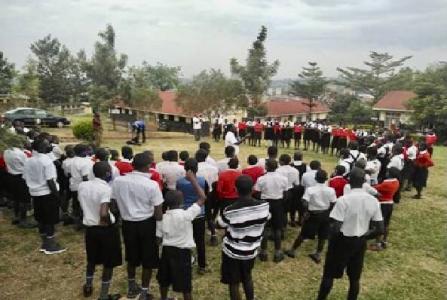 Mr Steven Emor, the Senior Officer of the Albert Water Management Zone who led a team that planted trees at Green Circle primary School in Fort Portal city sensitised the pupils on how to plant trees, maintenance, and the importance of trees to the environment.

“If you plant trees near your homes and at school, you will always have clean water from river Mpanga” he said, adding, “When river Mpanga is dirty, then the water you receive in your homes from taps too will be dirty.” 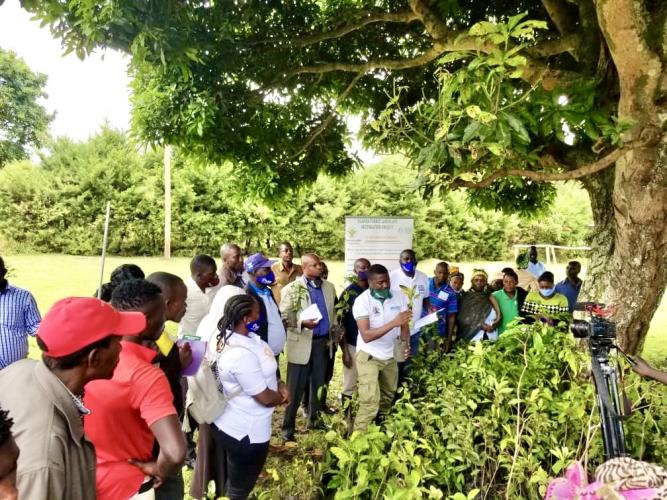 The business community especially those operating close to river Mpanga and its tributaries joined hands with the city clean-up campaign, public dialogues and tree planting. The traders pledged to stop dumping waste in the river. CARITAS Fort Portal HEWASA, the regional coordinator of sector NGOs under the UWASNET umbrella, pledged to continue this good deed by mobilising the traders in Mpanga market to carry out monthly clean-ups.

Communities living close to the river catchments such as in Mugusu and Kicwamba in Kabarole were also mobilised to join the campaign through community dialogues and clean-ups in the trading centres and were sensitised in an after-market clean up exercise at Mugusu organised by the Ministry of Water and Environment (MWE) with other partners.

Recognising the power of the media in creating awareness and promoting positive WASH behaviour and water resources management, IRC Uganda has continually facilitated the learning and active participation of journalists in Kabarole and the Rwenzori region at large. During the regional UWEWK21, journalists through their social media group “Rwenzori WASH Media” with IRC’s support undertook to follow the events, document the awareness messages and share by publishing in their media houses the outcomes of the campaign. The media was mobilised to save the environment by highlighting issues in their daily reports in their different media houses. 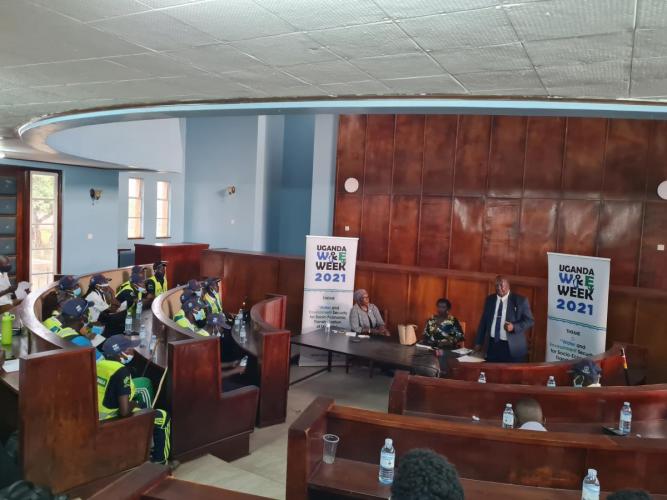 The journalists have been empowered through IRC’s support to report beyond the sensational political news, but rather share advocacy messages that will facilitate the desired change in water, sanitation and hygiene, and natural resources governance in the region and in the country at large. A number of their stories were given airplay on the regional radio stations and some published in the national dailies.

Read the stories in the Daily Monitor.

IRC joins UWASNET Board of Directors