Looking back on our first #GivingTuesdayNL

3 December 2019 for the very first time the Netherlands also celebrated the global giving movement. IRC supported #GivingTuesdayNL as a partner and we also ran our own campaign. If by now you're wondering how, what and why, you have probably missed all the blogs and news items on this page, so click away.

Just a week after #GivingTuesday, we were invited by Salesforce.org to present the successes of both the movement and IRC's campaign at their DOT org (Develop, Optimise, and Transform for Impact) conference. It's a techy event with the very noble idea of bringing private sector together with nonprofits and accelerate cross-sectoral collaboration.

Preparing for this enabled the #GivingTuesdayNL team – including IRC - to reflect on the successes and lessons learnt from joining the movement. This blog shares these reflections beyond the walls of the Beurs van Berlage, Amsterdam (the impressive over 100-year old building, where the DOT org conference was held on 10 December). 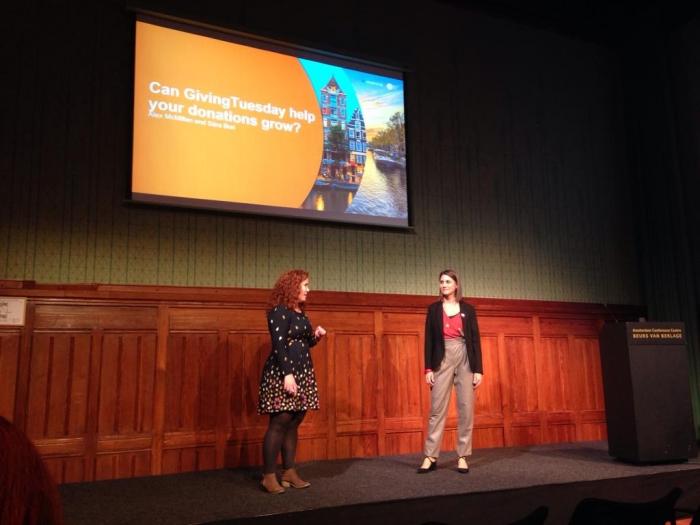 Did #GivingTuesday work in the Netherlands?

Alex McMillan – fellow presenter at DOT org and team member at #GivingTuesdayNL – used the following analogy to start answering this question: "when we all point our lasers at a death star, we can destroy it together. A single good idea, when distributed far and wide, creates an enormous amount of power and energy. Except, obviously, in the case of #GivingTuesday we're talking about generating good will, not destroying a Star Wars ship."

In the first edition of #GivingTuesdayNL over 250 nonprofits, and around 30 private sector organisations focused their lasers to create buzz for the giving movement in the Netherlands. This buzz was picked up by 21 media outlets – including some of the biggest channels in the country, such as Hart van Nederland, NPO Radio 1 or RTL Nieuws. The over 2 million reach on Instagram and Twitter had the #GivingTuesdayNL hashtag dominate most of the day on social media channels, even making it to the number one trending topic in the country on Twitter. As far as donations are concerned, the most recent calculation is at 180.000 euros in total, with some crowdfunding platforms reporting a 20% increase in donations on the 3rd of December compared to a regular day.

So, it looks like it works in the Netherlands. For next year, the team would like to see an increased number of private sector organisations and individuals join the movement. But for a first year, we call it a success.

Did #GivingTuesday work for IRC?

Our primary purpose was educating the public – primarily in the Netherlands – that merely investing in new infrastructure without thinking of systems that keep them running don't solve the challenge of improving and sustaining safe water, sanitation and hygiene services globally. Our messaging revolved around raising funds for WASH systems in schools and clinics in Burkina Faso, Ethiopia and Uganda. However, having a donation button is such a novelty for IRC that we regarded our donation ask as a secondary aim, an experiment to help make our messaging more accessible and #notjust4nerds.

What did we achieve?

We shared IRC's story in two webinars, one meet-up, one conference and one live event, reaching over 500 people. On the 3rd of December our social media reach was 10 times higher compared to a normal day. And what we are most proud of: IRC's story and campaign were shared in the Metro, a free daily paper distributed in 550.000 copies and read by approximately 1,100,000 people on trains, in libraries, schools and more in the Netherlands. Taking the WASH systems message into mainstream media is something we find challenging. Joining #GivingTuesday has definitely helped us refine our messaging and create avenues for reaching new audiences.

What did we learn?

The newly created IRC #GivingTuesday donate page was clicked on over 200 times but as expected, didn't raise a significant amount of funds. As IRC's Head of Strategic Partnerships, Bryony Stentiford mentions in her #GivingTuesday pass notes, IRC – as many other nonprofits – hopes to increase the amount of unrestricted funding that gives us flexibility to follow our mission of promoting a systems approach to safe and sustainable WASH. Even though #GivingTuesday has definitely given IRC the opportunity to tell the real story of WASH to new audiences, we still have work to do on becoming a trusted and recognised organisation in the eye of the public.

Challenge accepted. #GivingTuesday is on the 1st of December next year. See you then?