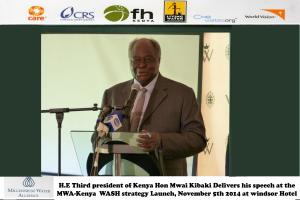 "As long as the cost of water at the point of use in Africa remains three to five times higher than in Asia or Europe, our quest for universal water coverage will remain elusive," former president Kibaki said at the conference. Kenya loses around US$ 324 million annually due to poor sanitation. The Kenyan Ministry of Health stated that open defecation costs the country US$88 million per year - yet eliminating the practice would require less than 1.2 million latrines to be built and used.

The Millennium Water Alliance (MWA) is a US-based consortium of 15 leading NGOs in water, sanitation, and hygiene and recently expanded to Kenya to accelerate WASH funding and programming in support of the country's goals of 100% coverage by 2030.

Speaking at the launch of the Alliance in Kenya, Catarina Fonseca IRC's head of international and innovation programme said to be "pleasantly surprised with the level of political commitment of County Ministers as well and the financial and technical data available in the country", but also alarmed with the high rates of non-functionality for rural water and the low rates of coverage for sanitation in rural areas. Fonseca introduced IRC's highlights to support whole sector change from 6 years work in Ghana, and explained IRC's approach of consensus building around problems, seeking joint learning and testing of approaches among multiple partners, and searching for practical solutions that can work for whole districts".

"Bringing to scale and making real impact takes between 3 and 10 years, and the first step is that the government has to be in the lead of the whole process," she said. She emphasised that public finance is critical to reach this and to leverage private finance. More than 60 percent of Kenya's 39 million inhabitants live in rural areas. Today, 24 million Kenyans can access to safe clean drinking water. Only 3.5 million are connected to the sewerage, but Kenya has tremendous entrepreneurial and innovative companies that are willing to invest at scale to bring real transformation and improvements in water and sanitation service delivery. IRC is thrilled to contribute to such a vibrant community and will support the partners of the Millennium Water Alliance-Kenya to reach its ambitious goals.

See speeches in the links below.