Kenneth is dedicated to improving WASH challenges by giving a voice to communities. 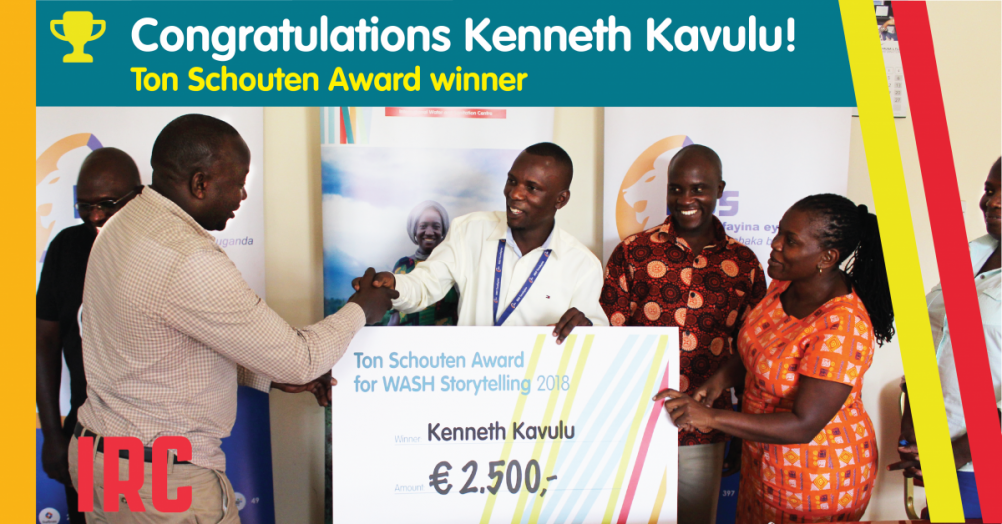 The story behind the award

The Ton Schouten memorial Award for WASH Storytelling is an annual award that we announce on the 2nd of June, Ton's birthday. Ton was not only a leading figure in the WASH sector, a champion of sustainability and supportive of government approaches to development, he was also a creative and passionate film maker and mentor to those he worked with and managed. Above all he believed in the power of communication to create change in the world.

The Ton Schouten Award aims to combine all these elements and support a specific group of young communicators within the WASH sector.

Kenneth Kavulu and his passion for WASH storytelling

This year's award winner, Kenneth Kavulu is an upcoming TV journalist in Uganda with a special passion for reporting on water and sanitation. He works for a TV station, Buganda Broadcasting Service TV, locally known as Telefayina. His TV Programme, "Embeera y'omugotteko" mostly concentrates on WASH in urban areas. "Embeera y'omugotteko" literally translated from Luganda - the main local language in Uganda - means "Living in slums".

There is a certain sensitivity and risk connected to collecting stories at community level, where people often view camera crews with suspicion because they don't want to be recorded. Still, Kenneth keeps on going back because he believes that people in such conditions need to be seen and heard if they are to get help from government and other actors.

He has created stories about how people with a disability access WASH in slum communities, the challenges of access to safe water on islands, how floods and poor sanitation facilities lead to the spread of dangerous diseases and many more. See one of his videos below.

Kenneth expressed gratitude to IRC for recognising his work in such a great way and posthumous gratitude to Ton Schouten for the job he started. He promised to honour his legacy with even more coverage of key WASH issues in communities.

"I was out there covering WASH in the slums, without even knowing that someone was following my work" - he said.

Besides receiving a cash award of €2,500 to support his career as a WASH storyteller, Kenneth will also receive mentoring by the IRC communications staff and opportunities to publish his work through IRC and its partners' channels throughout the 2018/2019 award year. He is looking forward to continue working with IRC Uganda and with other actors in the sector in order to contribute to the improvement of the WASH situation by 2030. We also look forward to working with Kenneth and congratulate him on his award win!