Getting water to Kabende subcounty, Uganda

How a campaign turned local Ugandan leaders into sanitation champions, who helped pass a new by-law.

Moses Rujumba, in his capacity as Rwenzori regional coordinator for the Uganda Water and Sanitation Network (UWASNET), recalls that although politicians always had interest in the sector, it was lukewarm. Besides, politicians were more likely to focus on water than on sanitation. It took a great deal of advocacy to motivate them to start paying attention to WASH generally.

“We’re now seeing change,” says Rujumba. “They are starting to argue issues from an informed perspective.”

Yet much of the focus appears to be on politicians at the higher levels of the local government as opposed to those at the lower rungs. Political actors at the community level, such as local council (LC) 1 leaders, have tended to be ignored on policy and legal issues of the sector. But this is changing.

“We’re starting to realise that politicians are becoming our advocates in communities and at the government level,” says Rujumba. “Political engagement is a gradual process, but we see improvements in engagement in line with WASH.”

In the past, politicians found it difficult to tell people that they should pay for water, which many felt was a service they were entitled to for free. “Now they are telling communities that as users you’re supposed to take care of your water services,” says Rujumba. As a result, communities are now more willing than before to pay for WASH services as long as they are accessible, reliable, and affordable. 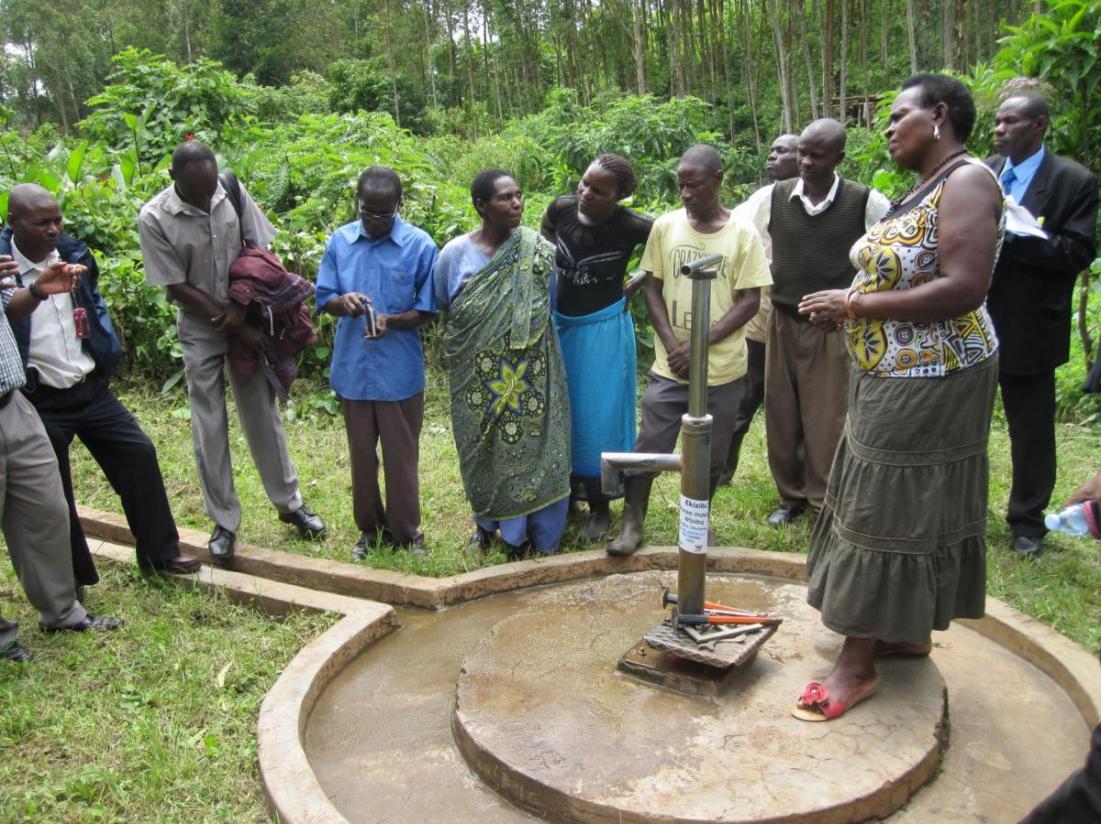 The campaign code-named Sanitation: Start with Your Leaders that was initiated to increase the coverage of sanitation and hygiene kicked off in Kijura town council and reached out across various communities in the district, resulting in higher coverage of WASH facilities. Politicians, according to Augustine Kisembo, the district secretary for finance and planning, were instrumental in the success of the campaign because “they are role models and are the voice of the people.”

In July 2017, a rapid water quality assessment of ground water in Kabarole District, undertaken with the support of IRC and the Albert Water Management Zone, had found that 64% of the 116 water sources sampled, mostly shallow wells, were contaminated with E. coli. Only 36% of these sources met the national standards. The main factors that contributed to the unsafe water conditions were run-off storm rain water, open defecation, sub-standard sanitation facilities, and latrines constructed in areas with high water tables.

The situation was particularly dire in Kijura where, according to the water quality assessment, all the sources sampled were highly contaminated with E. coli. Moreover, at 81%, latrine coverage in the town was below the district average of 85%. With about 2,800 households, 11% of the population in Kijura had no latrine at all. This all turned out to be a wake-up call for the local leaders.

There was consensus that the only way to effectively address this worrying sanitation situation was for the leadership to lead by example. It was agreed that leaders would be the first to take action to improve the state of sanitation in their own households. In so doing, they would be seen by their constituents and the population generally as exemplary champions for hygiene and sanitation compliance. This recommendation was tabled in the town council and unanimously adopted as a council resolution.

And thus the Sanitation: Start with Your Leaders campaign to promote sanitation at the household level was born, with leaders as its flag bearers. It was anticipated that by leading the way towards behavioural change, the leaders would inspire the rest of the population to come on board and adopt safe sanitation practices. With a reduction in source contamination, there would be increased and sustainable water safety.

The campaign involved home visits to ensure that all households had standard toilets; visits to and inspection of exemplary leaders’ households; health education; sanitation campaigns in public institutions (schools and health centres) mainly emphasising leadership as well as handwashing behaviours; and water safety planning follow up and implementation.

A by-law was drafted to enforce sanitation-related standards and ordinances to ensure that all residents comply.

With the active involvement of politicians, the campaign mobilised communities to appreciate WASH. Given that people were used to water as a free service, a way of thinking that politicians helped promote that often led to conflicts between communities and programmes of the local and central governments, changing mindsets was a critical first step. For instance, with the recommendation of the District Water Task Team (DWTT), the local government enacted a by-law that required each household to contribute UGX 1,000 per month for maintenance of water infrastructure.

The participation of politicians such as Katushabe as members of the DWTT make it easier to reach consensus when WASH issues come up for debate in the council. The DWTT analyses gaps in service and identifies interventions to deal with the gaps. The rest of the job falls on politicians to mobilise their constituents to support the efforts initiated by their leaders.

Having politicians on board has also helped to plant the idea that decisions about WASH should not be politically-driven but determined objectively based on need and demand. As Aaron Byakutaga, the district sectary for works points out, “data on water sources is being collected. Evidence-based decision making will guide planning and investment.”

The fact that the DWTT is composed of both political leaders and technical staff has facilitated collaboration between the two arms of the local government, leading to improvements in service delivery. For example, the DWTT spotted gaps in the District Water Office (DWO) that made it ineffective. It was woefully underfunded and severely understaffed. The DWTT advocated for more staff and lobbied the Chief Administrative Officer and the District Council to hire more personnel to beef up the DWO. These efforts led to the hiring of Community Development Officer (CDO) in charge of water and a Health Inspector in charge of sanitation and hygiene.

The benefits of team work between politicians and the technical wing of the District Local Government are evident. In Karambi sub-county, politicians played a key role in fostering community involvement and support when the pay-as-you-fetch (PAYF) model was introduced in the sub-county. The success of PAYF in Karambi inspired the DWTT to sell the idea for replication by other sub-counties.

It was critical for politicians to be involved in the campaign to sensitise communities about their responsibilities at water user level. Village meetings were conducted to convince people that water was a service that they had to invest in to maintain the functionality of the facilities.

Some of the challenges of working with politicians are that they tend to focus on the short-term given that their elective mandates are limited to five years at a time. As such, they prefer quick wins to long-term solutions. Politicians also tend to send out mixed messages during their campaigns in order to win votes. They are oftentimes compelled to make unrealistic promises. With the WASH master plan now in place, planning for the sector is no longer vulnerable to the vagaries of politics and the changing fortunes of individual politicians.

Getting water to Kabende subcounty, Uganda