Sustainable Sanitation and Hygiene for All

Let’s go back to the people for good #hygiene: managing leaks of blood & beyond. Read taboo breaking blog by… https://t.co/Uq3XX2A93u 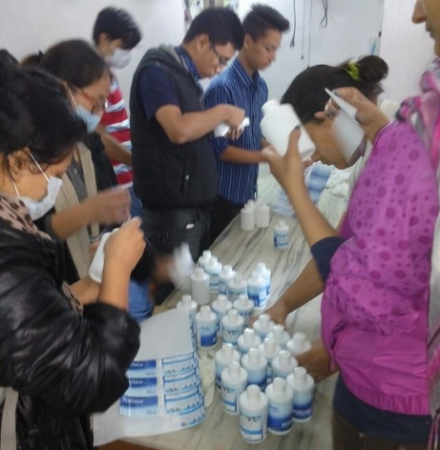 With a death toll that could reach 10,000, the earthquake that hit Nepal on 25 April 2015 has caused widespread devastation and despair. Over 8 million people are affected in 39 of Nepal’s 75 districts. The United Nations has identified shelter, water and sanitation, emergency health, food, and protection as the most critical needs over the next three months. They have launched an appeal for US$ 413 million for emergency assistance [1].

A huge setback for Nepal

IRC’s Senior Programme Officer Erick Baetings says it was “a big shock after hearing the news of last week’s earthquake. This is a huge setback for Nepal: its people and its economy. It is also a big blow for all who have been involved in improving the water and sanitation situation in the affected districts. My thoughts are with all my WASH friends in Nepal”.

IRC has a long history of involvement in Nepal, where we have worked closely with local partners like NEWAH who helped set up the WASH Resource Centre Network Nepal (WASH-RCNN). Currently Erick and colleague Ingeborg Krukkert are supporting SNV Nepal in the Sustainable Sanitation & Hygiene for All (SSH4A) programme.

Nepal relies heavily on trucking and wells for drinking water. Now transport of water has been interrupted and many wells have been damaged, leading to fears of water borne diseases.

In the ruined capital Kathmandu, thousands have spent five nights so far camped out in the cold, crammed into tents without access to safe, clean drinking water and flushing toilets, forced to defecate in the open [2].

Kathmandu’s water supply is “completely broken down”, says Arjen Naafs, the South Asia regional technical adviser for WaterAid. Naafs worries that the progress made to make Nepal open-defecation free will be undone in the aftermath of the earthquake. “We are going to get a cholera outbreak somewhere,” he said [3].

WaterAid works in 28 districts across five regions in Nepal, including Gorkha where the earthquake’s epicentre was and much of the NGOs work is concentrated.

In Sankhu village, just 10km from capital Kathmandu, Pradeep Baidhya watches as four search-and-rescue teams arrive, one after the other. They find no survivors and bring no tents, water or food. “That is what we need now, from our government”, Baidya tells Dutch reporter Joeri Boom. “How long do we still have wait?” [4].

How you can help

You can donate to the special Nepal earthquake appeals of organisations like WaterAid and UNICEF or to national appeals like the Giro 555, launched today in The Netherlands.

For Nepali citizens the I AM NEPAL Support Network has been set up to help all connect and share known needs and available supplies.

Sustainable Sanitation and Hygiene for All