A toilet for 66 million people in rural Bangladesh

In Bangladesh, the largest NGO in the world BRAC is working its way up to help the country to get proper sanitation. It has reached more than half of the population since the start nine years ago. It is one of the world's largest sanitation implementation programmes. IRC works with BRAC to make it happen. In this interview, IRC sanitation expert Ingeborg Krukkert tells her story about her work in Bangladesh.

"Bangladesh is well on track to meet the Sustainable Development Goals in 2030," says Ingeborg Krukkert in IRC's headquarters in The Hague. "This is undeniably due to BRAC because it's serving half of the country. Bangladesh is a good example for others on how to achieve so much in such a short time. It is proof that change is possible."

IRC's sanitation and hygiene specialist for Asia, Ingeborg Krukkert, travels to Bangladesh every two months to work with BRAC. Working on hygiene promotion and behavior change, she complements BRAC's groundbreaking programme with IRC's monitoring system to measure and enhance the true impact in sanitation and hygiene.

Low-lying Bangladesh with its 230 rivers and population of 160 million people is the world's eight most densely populated country. The country only gained independence in 1971 and its economy is largely based on agriculture. Poverty is widespread, though recently the country witnessed a rise in health and education and successfully managed to reduce its immense population growth. 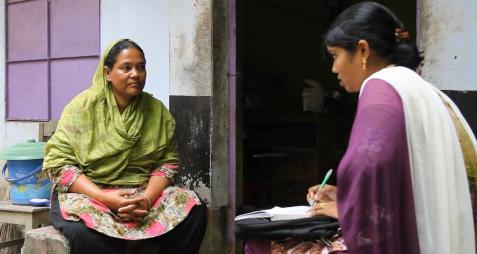 When BRAC started its water, sanitation and hygiene project in 2006, most people still practised open defecation. Only one in three people had access to sanitation. Now, almost 10 years later, BRAC states it has covered at least 80 % of the people living in the 152 districts where they work, reaching more than 66 million people which equals about half of the rural population of Bangladesh. The government of Bangladesh even speaks of 96 % coverage. With sanitation being in the worst state of all Millennium Development Goals (MDGs) around the world (1 billion people defecate in the open and another 1.5 billion do not have a safe hygienic toilet), this remarkable shift made Bangladesh suddenly a frontrunner in the region.

The key to success? 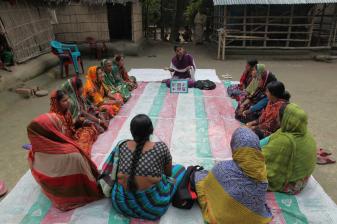 "BRAC is the entry point for the community and local influential people. BRAC created a social movement by working with village WASH committees in all districts – men and women who are appointed to oversee the water and sanitation situation," Ingeborg Krukkert explains. "This is working as a real catalyst to empower communities, and the scope is immense: there are 65.000 WASH committees in all districts where BRAC works, 8,000 field staff who visit households and do hygiene promotion, and most of them come from the area where they work. This has proven to be very effective. BRAC is a well-oiled system that successfully has triggered behaviour change and hygiene."

Since 2006, IRC has been a partner in the programme to look beyond numbers and focuses on sustainable behaviour change. Krukkert: "BRAC wanted to measure behaviour change and was looking for a way to improve its programme. At IRC we have a track record of working on that, so why re-invent the wheel? IRC works with BRAC to adapt and implement our qualitative monitoring methodology, called QIS. It has been used successfully in many countries – including Indonesia, Nepal, Bhutan, Cambodia, Vietnam, Laos and Ghana – to measure true behaviour change."

This Qualitative Information System (QIS) is a monitoring system that can turn qualitative data into numbers to make it possible to compare progress in behaviour and to measure if change is sustainable over time. The survey combines closed and open questions with observations by interviewers. The observations are used to validate what people in the households say. IRC helps to build the capacity of the trainers and employees from BRAC so they can continue QIS without external support.

Krukkert: "From the QIS survey and experiences from field staff for example it became clear that men where hard to reach in hygiene promotion. They were not there at household visits or village gatherings. Hygiene promotion is crucial for people, not only to learn why it is important to cover the water they carry or what's the role of water seals, but even more to convince them to change risky behaviour. So we drew up new ways to reach those men, which worked quite well. Holding sessions in the tea shops and using tailor-made messages ("You can save money by using compost or by repairing some things yourself") we were able to reach more people."

Hygiene promotion according to Krukkert should not be done solely by holding up pictures and explaining why washing your hands is crucial. "It's more about understanding the context and problems, to then find a solution. Interviewers who do the household visits, should ask questions as: 'Sometimes men do not use the latrine. I know that it sometimes happens in my family. Does that also happen in your household? Who in your family do sometimes not use the latrine? Or 'I see the water seal is broken. What happened?' Then the women would explain that without the water seal they need less water or that it broke while cleaning. It is important not to accuse people of bad practice. Convince them about the advantages of good practice. Ask why it is difficult and listen. We call that a move from 'Telling' to 'Selling'". 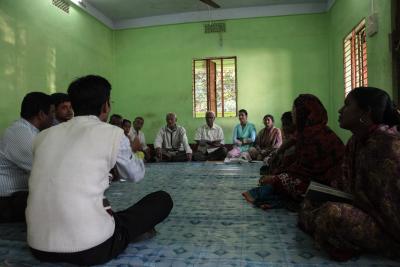 The design that IRC developed to measure impact, QIS, has delivered high coverage rates of people who have sustainable access to toilets. But are the high rates correct? To test this, donor Bill and Melinda Gates Foundation tested it again. They checked the same area using different scientific monitoring methods. This included an infrared monitoring system to see how often a toilet is used. This allowed them to observe households and see if the behaviour change was real. And the result? The outcome BRAC and IRC claim is correct. In fact, it was said that: "BRAC has even underreported its successes, the real results are even better" (see link to final report Bill and Melinda Gates Foundation below).

Money for the poor

As the Millennium Development Goals (MDGs) slowly change into the Sustainable Development Goals (SDGs) this year, there are 15 more years to go to reach the remaining 20 % of the people in BRAC's area to reach. "Still, everyone knows that they are the hardest to help," says Krukkert. "It is not only the ultra-poor we are speaking about, for BRAC's programme has been implemented progressively across different income groups. Another challenge is that there is no one-size-fits-all solution for all areas."

Still the biggest future challenge is finance. Currently the programme is sponsored by big donors like DFID, Australian Aid, and the Bill & Melinda Gates Foundation. BRAC helps the poorest people by giving subsidies. That's the main reason why both the poor and ultra poor have steadily gained access to sanitation. "Without these grants and loans, this would not have been possible," Krukkert says.

Want to know more? Watch the video on QIS below.