Shouldn't schools and work places have clean water and decent sanitation too?

The post-2015 Sustainable Development Goals should include access to water and sanitation in schools, clinics and the work place. This was stated by IRC and Simavi during a networking event on Thursday 4 December at the Mauritshuis in The Hague.

At the event where the Dutch water sector met the visiting Steering Committee of Sanitation and Water for All (SWA), different organisations presented case studies that stressed the importance of access to water and sanitation in schools, clinics and at the workplace.

We campaign for a dedicated goal on water and sanitation

Patrick Moriarty, presenting the impact of menstrual hygiene with a case study on menstrual hygiene management in Ugandan schools, said: "11 % of her time, a girl pupil will miss school due to menstrual periods. We continue to fight the taboos around menstrual hygiene.” Moriarty spoke about the first National Menstrual Hygiene Management Conference that was held in Kampala in August 2014.

"We campaign for a dedicated goal on water and sanitation in the follow-up of the Millennium Development Goals after 2015”, said Andy Palmen, director Partnership Development at Simavi. “And we want this access to water, sanitation and hygiene to be extended beyond homes to schools, healthcare facilities and the work place.”

See transcript of the video below

In less than a year the successors of the Millennium Development Goals will be defined: the Sustainable Development Goals. Although it appears that access to water, sanitation and hygiene is one of the goals, critical components such as water and sanitation at work, in clinics and schools are still missing. That is why Simavi and IRC put these key issues in the spotlight.

The SWA Steering group was in the Netherlands to discuss the role of its members in their efforts to ensure that water, sanitation and hygiene are recognized as priorities in the post-2015 development agenda.

The event was met with great enthusiasm by the invitees. Special guests at the event included Dutch national soccer player Aron Winter, and Catarina de Albuquerque, the newly appointed Vice President of SWA. After the presentation of case studies, facilitated by journalist and presenter Charles Groenhuijzen, the guests where invited for a tour along the Dutch masterpieces in the Mauritshuis. 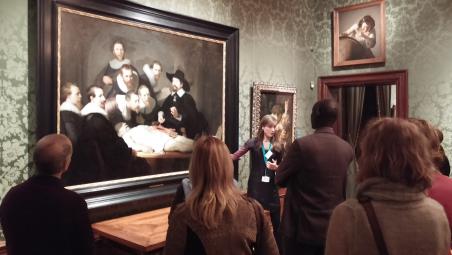