Water and sanitation remain a priority for the Dutch Government. For the coming years 100 million dollars a year has been budgeted to improve access to drinking water, sanitation and hygiene (WASH) promotion.

These resources will be channeled through bilateral cooperation programmes in seven countries, through multilateral agencies like UNICEF, NGOs and the private sector. 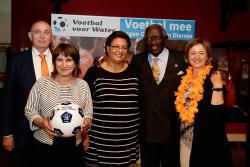 The Dutch Government supports the Football for Water initiative to provide WASH in schools in Ghana, Kenya and Mozambique. On 31 May in Rotterdam the Football for Water public fundraising campaign will kick off during the friendly football match between The Netherlands and Ghana to highlight the importance of WASH. At which Ex - President of Ghana John A. Kufuor currently visiting the Netherlands will be present. As chairman of the international partnership - Sanitation and Water for All (SWA), Kufuor congratulates Netherlands for its leadership in the field of Water, Sanitation and Hygiene (WASH).

At a side-event, the Dutch Government will also sign an agreement with UNICEF to contribute US$ 1.5 million to the Sanitation and Water for All (SWA) partnership. SWA brings countries, donors, civil society and others together to ensure more people obtain improved access to WASH as quickly as possible. The occasion will be attended by senior officials including SWA Chair and former President of Ghana John A. Kufuor, the Dutch Minister for Foreign Trade and Development Cooperation, Lilianne Ploumen, the Ghanaian Minister of Foreign Affairs Hanna Tetteh and UNICEF's Deputy Executive Director Yoka Brandt.

The Dutch commitments to the worldwide WASH sector were made last month during the High Level Meeting of the SWA in Washington DC, where the Government promised to improve water, sanitation and hygiene services worldwide through an investment of 100 million dollars per year over the coming 4 years (2014-2017). The objective is to reach 25 million people with first-time access to sanitation by 2015 and first time access to safe drinking water by 2018. The 2014-2017 commitment was the continuation of a vision that begun in the first SWA High Level Meeting in 2012, where the Dutch government committed to USD 90.5 million for the 2012-2014 period, towards reaching 10 million people in West- and Central-Africa.

This investment testifies to the leading role and active involvement of the Dutch in the water, sanitation and hygiene sector globally. Speaking of this dedicated support, former President Kufuor stated:

"Ghana and Africa have benefitted greatly from Dutch leadership on not only water but also on the essential but often forgotten issues of sanitation and hygiene. We have benefited from your engineering and scientific knowledge, and also through the generosity of the Dutch people and of your government."

The soccer match Netherlands-Ghana will be an exciting football match with one goal: access to safe drinking water and sanitation. It is a fundamental human right, and its improvement is the main objective of the Dutch WASH policy.

Mrs. Lillianne Ploumen Minister of Development Cooperation and Trade attaches great importance to sustainability of water investments and a better future for the 2.5 billion people lacking improved sanitation and the 748 million people without improved drinking water. That's why the Netherlands supports initiatives such as 'Football for Water' and "Sanitation and Water for All"

Andy Palmen , on behalf of the Dutch NGO Simavi represents within the SWA network:
" Andy Palmen Simavi , the organization that represents the Dutch WASH NGOs within the SWA partnership : " The Dutch government plays a leading role in the field of water, sanitation and hygiene . As a donor, to invest in innovative programs such as Football for Water. By also politically, by pulling up with Dutch NGOs and bring Southern governments. Importance of WASH attention Investing in WASH not only saves lives, but is also a prerequisite for the economic development of countries. And it is a wonderful calling card for Netherlands globally. Calculate your profit . "